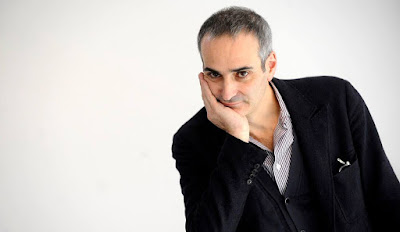 At the Q&A screening of Personal Shopper, a couple of audience members mentioned being scared.

Would you agree the film is scary?

I don’t know. If they were scared I suppose it’s scary. It’s not scary for me because I’ve done it. It’s something you can’t really quantify. I suppose that genre filmmakers can know and control it a bit more than I do. I have zero control on it. I want to push the scenes as far as I can, but I’m not sure when people are actually scared. When you make something that’s funny, that has comic overtones, you know instantly, because the audience is laughing. When they are scared, you don’t have that kind of feedback.

It’s not too much of a spoiler to say that early on, we get to see a ghost on-screen. How did you decide how much you were going to show?

I wanted to show it. What’s in the film is pretty much what was in the screenplay. Slightly different; I obviously adapted, and blah blah blah. To me, the question was more how to represent it. It’s a difficult question because it’s a projection of your imagination. Doesn’t have to look too CGI, too digital. If it’s just a superimposition it will look corny. Very early in the process I had the clear notion that what I wanted to use as a reference was spirit photography, from the second half of the 19th century, early 20th century. It looks very naïve now with the perspective of time but it’s still kind of scary and it really does represent what the medium thought of what they saw in séances. Ultimately I used descriptions by medium of their encounters with spirits. I was as strict as I could be in terms of representing ghosts in a way those in the spirit world imagine they see them.

There is an extended sequence in the film without any spoken dialogue but tension is sustained through a mysterious, menacing text message conversation. What were the difficulties and possibilities of using modern media in this way?

I was really wondering if I could manage to translate on-screen the fascination we have with our cell-phones, with the conversation we can have via text message. It can be addictive. ‘How long will it take to get an answer?’ ‘Oh, he’s writing, the dots are blinking.’ That kind of tension. I thought it would be fairly simple, but in terms of technique it was a nightmare. To get that stuff right, I had no idea how complicated it would be. I kept changing. Some of the text I ended up changing the wording. I reworked that scene for ages to maximise the tension.

Given the rate at which technology moves on, do you not worry using text messaging like that will date the movie?

Of course it will date the movie. But think about when Superman changes in the phonebooth or something. We kind of accept it in the history of filmmaking. We’re fine with watching movies where people don’t have cell-phones. To put it that way, your film, any film, instantly becomes a period piece. You don’t have to wait five years. Especially in terms of communication. In terms of communication, this will be completely outdated in five years’ time. Even if I think people will keep on texting, because texting is a very interesting form of communication, it will just be a memory of how people functioned in 2016.

Kristen Stewart’s performance is terrific, but you suggested at the Q&A that there were depths to her that were still yet to be seen. Can you elaborate on this?

I genuinely think that I’m extremely privileged to be working with Kristen because I think she’s a very unique actress. When we were making Personal Shopper I was just wondering where the limit was. I never really sensed where the limit could be. I think that Kristen can be funny; I think that’s a dimension of her that has not been explored much. I think she has a wicked sense of humour. Once in a while, when she has something she can use for comedy, she’s pretty smart at using it. I would love to do a period piece with her. I’ve made two movies with her and I’m still curious of where she can go. Which doesn’t mean I’ll be making my next film with her but there is the potential for that.

You also said that the role wasn’t written for her; given certain similarities between her character here and her role in your previous film [Clouds of Sils Maria], did one role grow out of the other?

I didn’t exactly write it for her, at least not consciously. I was certainly inspired by her. I don’t think I would have written the character of Maureen if I had not worked with Kristen. She was my one experience of observing a young American girl. When I’m writing the part of a young American girl it has echoes of that one person I know. Until the moment we finalised that we were going to work together on this film I kind of refused to admit the logic of how it all fell into place. But the minute it was clear, I had to accept that I’ve been writing this piece for her.

Where did the idea for the film begin?

Sometimes it’s a bit difficult to explain, but here it’s fairly simple. I think that what inspired me was the notion of this girl doing a stupid job, at least a very mundane job. She thinks it’s superficial, wasting her time, but she needs it to make a living. She finds some sort of comfort by exploring ideas out in her dreams. And it grew from that.

In this, as well as being one of the big talking point of Clouds of Sils Maria, there is a strong sense of ambiguity to the narrative. How would you explain this?

I’m interested in the twists and turns of how I describe things. I like the idea of how to surprise the audience. How to not go for the obvious, the expected, and take it in another direction. I’m not interested in resolution. I’m interested in the excitement of witnessing something that’s strange, in a film. If you explain it you kind of spoil it. Usually movies are adverse to ambiguity. I like the notion of ambiguity. I like the unresolved quality of ambiguity. I like the way it generates questions that stay with the viewer. To take another example that’s maybe more clear-cut, like when Valentin disappears in Clouds of Sils Maria, I think it’s just more interesting to have her disappear, as opposed to having her leave. I could have added a shot where we see her with her hiking boots boarding a bus, and no one would have questioned it, but I think the question mark we stay with increases our awareness. It gives a sense of maybe she won’t come back. It gives a sense that during the whole epilogue of the film she’s present. She’s like a shadow that’s hovering over the whole night. It’s much more interesting to leave it open. Has she disappeared? Why has she disappeared? Ultimately we don’t care. What we care about is that she’s still around, she lingers on. It’s this notion of unease that’s generated by Personal Shopper. The ambiguous few shots of some ghosts walking out of a hotel is beneficial to the ending of the film. It’s something that echoes.

You shot Personal Shopper in a short amount of time. Given a larger budget/longer timespan, is there anything you’d change?

No, because I like the energy of it. I like to shoot long days. I’ve shot all my recent films in about six weeks. Even Carlos. Carlos was three movies, but it’s like three times six weeks. Maybe Something in the Air was a bit longer. But I like this struggle with time. It’s what makes the process exciting. When there’s too much time, it gets a bit boring, and you can get… bourgeois.