Kristen for the Chanel Gabrielle handbag campaign - Photos and Details 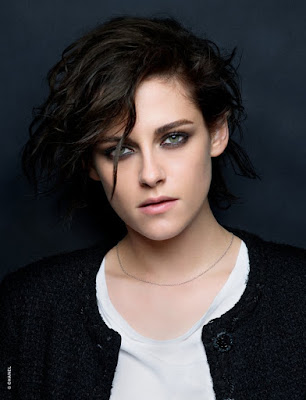 
Video teaser of the campaign, can be viewed here and the full film here.

Unveiling the campaign exclusive to WWD, Lagerfeld said he wished to show that the Gabrielle bag can be worn in “many different circumstances” — and why not by a man?

Lagerfeld noted that virtual reality goggles — which inspired the shape of the handbag — are used by both sexes. Indeed, at his fall 2017 ready-to-wear show in Paris earlier this week, the designer had male models — including his eight-year-old godson Hudson Kroenig, tote versions of the Gabrielle. Its double-chain handle permits multiple carrying options, including cross-body for greater security.

Lagerfeld characterized the campaign cast as friends of the house — each very connected to the times.

Stewart is a face of Chanel makeup and Lagerfeld has photographed her for several Chanel handbag and ready-to-wear campaigns. Also a house ambassador, de Maigret has a music label and is a producer, photographer and coauthor of the book “How to Be Parisian Wherever You Are: Love, Style and Bad Habits.”

Stewart, now a regular in front of Lagerfeld’s lens, calls the process “natural and instinctive for both of us.”

“Seeing the satisfaction on Karl’s face when everything comes together is always the highlight for me,” she said. “Exploring the evolution of our creative relationship is one of the greatest privileges I’ve had as an artist. The result always feels as free as the process was.”

The ads are to run exclusively as two double-page spreads — the first with a pack shot and a portrait, and the second with a lifestyle scenario. De Maigret, for example, is depicted barefoot in a Parisian apartment, while Delevingne totes a skateboard against a graffiti-strewn security gate.

In tandem with the print ads are four short films that are to debut on Chanel’s web site and social channels.

The French fashion house has dubbed 2017 the year of Gabrielle, the name of a forthcoming perfume and also jewelry and watch collections inspired by the rebellious house founder.

‘I’ve gotten to know him,’ Stewart told me. ‘As an outsider I thought, “He’s a character, he’s a fashion designer, he’s probably insanely pretentious.” But the guy ended up being the total opposite of that.’

Their latest collaboration is for Chanel’s new bag, the Gabrielle – the company’s first big bag launch for three seasons. ‘The look of the range is inspired by virtual-reality glasses,’ said Lagerfeld.

Modern though it may be, the bag still boasts the label’s trademark chain, quilting and CC logo. ‘The handbag has a strong look, so the people who represent it have strong looks and personalities,’ he explained.

The images from this shoot – with Lagerfeld as photographer – to publicise the Gabrielle offer a tantalising glimpse of muse and designer at work.

‘Seeing the satisfaction on Karl’s face when everything comes together is always  a highlight for me,’ said Stewart. ‘He’s a visionary.’

Source: Chanel HQ 1
Posted by Mods TeamKristenSite at 5:23 AM