Olivier Assayas talks to Vulture about "Personal Shopper" and Kristen 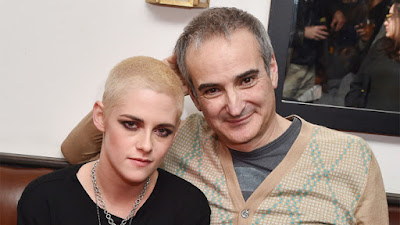 In real life, Kristen is an actress that fashion houses clamor to style, but there’s this interesting tension when she wears their expensive dresses because you know there’s a part of her that would rather put on a hoodie and tennis shoes.

Yeah, and you see it. You feel it, you sense it. The character is inspired by her because she has this androgyny, a masculine and feminine side, and she’s completely herself and comfortable on both sides. I think that’s part of what makes her fairly unique because, as you say, she’s this fashion muse but she’s also a rebel. There is something genuinely rebellious about Kristen. She has this kind of punk-rock energy to her.

Do you remember the very first time you met Kristen?

I remember very vividly the first few times I met her. The first time I met her, I went to visit Robert Pattinson in London and they were together at the time. I just remember this girl who came in and out of the room where we were having a conversation, and I was looking at her, like, Who is that? And then she was friends with my producer Charles Gillibert who produced On the Road, the Walter Salles movie, and I saw her in social situations in Paris. It’s totally impossible to connect with anyone at parties like that, but just watching her move and how she functioned, I thought she had something that was just so raw, so authentic, and so cinematic. I always felt there was more to her than whatever I had seen in the movies. To me, that’s the key to really having the desire of working with an actress. I did not know her, but I had the fantasy of her.

Not every actor is the same in real life as they appear onscreen, but to know Kristen through her roles is to get a strong sense of what she’s actually like. She has a very grounded center, both as a character and as herself.

Yeah, that’s true, but that’s truth starting at a certain point. I think that for some reason, a lot of people had a very wrong notion of Kristen being distant and aloof, when in real life she’s the most simple, likeable, generous person. What I was happy about in Clouds of Sils Maria is that I kind of encouraged her to let this fun part of her come across, and Juliette was incredibly generous about that in many ways. There were a couple of scenes where Juliette would say, “You know what? Kristen, Olivier, why don’t we make this more funny? We don’t see these characters laughing enough.” I think a lot of people who love Kristen were really happy to see her laugh and be funny in those scenes in the same way that she can be funny in real life.

What has been fascinating in working with Kristen is that, in a way, it’s strangely similar to the way I functioned with Maggie Cheung. Like with Maggie, I wrote Irma Vep for her where she was playing an archetype, and then once I had done that, I had the desire to give her a part which was more layered, more like the real-life Maggie. I think it’s a bit similar with Kristen where I gave her this kind of one-dimensional part in Sils Maria and it generated the desire to write something more human, more complex, and closer to her in many ways with Personal Shopper. But the thing is that, even when I was making Personal Shopper, I had the feeling like I was experimenting: “Where are her limits? How far can she go?” The answer is, “I don’t know.” I haven’t really seen the limits yet and so I hope we have the opportunity of working again together.

Personal Shopper is terrific, yet it was booed at Cannes. Do you think that’s because you and Kristen had just come off this major moment with Clouds of Sils Maria, and the French press was trying to cut you down to size?

Yeah, you never know. Cannes can be tough, so you have to be psychologically prepared. Anything can happen in Cannes, especially with movies where you take risks. Cannes is not that risk-friendly, you know, and I like to take risks with my films — I never go for the obvious next step. I think that for some reason, the tension in Cannes can be a bit hysteric, a bit excessive. People overreact. I have a long history with that specific festival and it’s been very good to me, so I’m never going to say anything bad about Cannes, but Personal Shopper is not tailor-made for Cannes, I’ll put it that way.

The Cannes jury liked it, though.

For some reason, I was more surprised that the reaction to Clouds of Sils Maria there was a tiny bit more minimal than what I would’ve imagined. The film was very successful all over the world, but I thought the reaction in Cannes would’ve been stronger. I mean, in terms of getting a prize, I would have bet on Clouds of Sils Maria as opposed to Personal Shopper, but then the crazy thing is that we got a prize for Personal Shopper.

You were supposed to shoot a different movie right before this and it was shut down right before you began. I wonder if somehow you were able to channel that sense of interruption into the character of Maureen, who is shell-shocked after this important part of her, her brother, has been ripped away.

Yeah, I suppose I did. The mourning aspect of it maybe had to do with that. It was a very violent experience, because it kind of never happens, to have a movie shut down right before the shoot. The sets were built, the costumes were there, the actors were there, the trucks were loaded with the equipment. What can I say? The film was literally happening and then all of a sudden, the financier pulled the plug … which is crazy, because he had more money to lose by doing that than by actually making the film. So I was in shock and I came back to Paris and the question was, “What am I going to do? What’s my next move?”

And I decided that the only way to get over it was to start from scratch, not to try to revise the other project. I always have a couple notes scribbled here or there about movies I eventually would love to make, but here, I just wanted to start from the blank page. Yeah, that moment was kind of defined for me by mourning but I suppose that the energy I found was positive, and connected to Kristen. And I wrote it real fast. I came back to Paris in November and I had a finished screenplay by February and if I could have shot it by June, I would’ve been ultrahappy, but I had to wait until Kristen was done with the Woody Allen film [Café Society].

Does it give you pleasure to watch some of the most tense scenes of the film with an audience, to feel how they’re responding to it?

I think it’s more striking with comedy, actually. I’m not exactly a comedy director, but once in a while I make a movie that can have funny elements and it’s really great to hear the audience react — to have them actually laughing is thrilling, it’s exciting. With scenes that are scary, you can’t see the audience reacting so you don’t exactly have an instrument to measure it. Also, in terms of editing and making the film, it’s very difficult to fine-tune those shots, those things, because after a while you don’t react the same way yourself, you know? You’ve watched those shots a million times in the editing room and after a while, you don’t get the same thrill. So you have to assume how the audience will react. It’s a very good question that’s hard to answer.

Maureen is repulsed by this false world of celebrity, but at the same time, there’s a real allure to those clothes she puts on, almost as though she’s donning a new identity. Do you have the same push-pull relationship to fame?

I’m very ambivalent about a lot of things in the modern world. We live in an extremely materialistic world and that’s frustrating but at the same time, there is something very vital about it. I am not puritan in that sense, to put it that way. I set the story within the fashion world, which is like the most material version of whatever the material world is about, but simultaneously, there is something artistic about it. My mother was a fashion designer, so I suppose that whenever I’m dealing with the fashion industry, I have that influence. The art world is the same way: We can be freaked out by the art world and the way it has become spoiled by industry, but at the same time, we do see the beauty of it. We can be fascinated or excited by art beyond what is very superficial about it. I think I have, in that sense, a very dialectic form of mind. I’m always interested by the way that opposites blend.