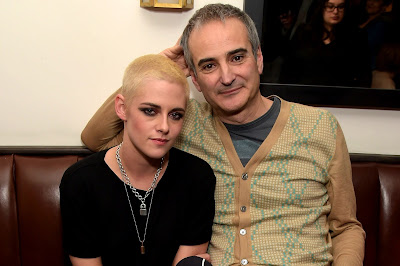 EW: What was the first idea or image that set you off on writing this film?

OLIVIER ASSAYAS: My original idea started with the character. I imagined this girl who was bored by her dull, frustrating, alienating day job and she finds some protection and consolation in the world of her imagination. Then in the process of writing, I also realized it was a coming of age story. And it made sense once I realized it was also about someone who was reconstructing herself after a devastating loss. She’s lost like half of herself and has to become whole again.

How long ago did you start writing?

I had been scribbling down some ideas and one day a few years ago I just sat down to figure out if this had potential or not.

Was that day before or after you’d first met Kristen Stewart?

Well, I suppose that the character preexisted before Kristen but I think it’s definitely Kristen who gave life to it. We had been making Clouds of Sils Maria and I realized what a unique actress she was and for some mysterious reason, we had a connection. And afterwards, I hoped we would be able to go further into that. Maybe the reason I had never fully written Personal Shopper was because I did not have the actress for it. For both of us, this film was about finding where the limits were. And after finishing it, I can tell you I have no idea where the limits are for her.

I’ve seen you two interact. It seems like you really like each other and feel very comfortable together.

We do, very much so.

What is it about your friendship and your collaboration that clicks so well?

I think I have been the one filmmaker perhaps who has given her more space and freedom. When we worked on Clouds of Sils Maria, I was the one who told Kristen, “It’s okay to be yourself.” To me, she wasn’t a movie star, even though her name was helping to get my film financed. I was interested is Kristen as a human being and I loved discovering that she was so instinctive.

She’s said that this film was very hard work for her but that she really understood this character.

I think she understood my script better than I did. I’m half joking but half extremely serious. For instance, I wrote the screenplay really fast and I wanted to shoot it right away. And Kristen kept telling me, “Oh, no, I’m doing this Woody Allen movie (Café Society) in the summer and I really need to prepare for it.” And I was like, “Kristen, you don’t need months to prepare for a Woody Allen film.”

But I accepted it and we postponed the film until she was done with the Woody Allen film, which I loved by the way. But once we started shooting, then I realized her preparation process. It’s amazing. She needed time to appropriate the grieving, the anxiety, and find herself in all the places where this character takes her. I fully realized that she needed all that extra time. And in that sense, Kristen was much more the adult in the room than I was.

What’s the collaboration like while you’re shooting on set?

We actually don’t talk very much. We’re each very intuitive. I like to discuss my work once it’s done because somehow then I end up making sense of it. But it’s much more raw in the process of making the film. And Kristen functions that way too. I don’t rehearse. I don’t explain. With Kristen, she’ll come to me and say, “I like this moment,” and I’ll say, “Very good, then let’s try to expand it.” We have a very matter-of-fact discussion style.

It’s funny, though. When we’re discussing the film with journalists or doing a joint interview, already I think I’m telling her more things than I ever said during the shoot. I think words are a limit to the complexity that we create on set. Putting out too many words while making something kind of spoils the process.

Do you feel weird talking about the film without her?

In a way, yes. I feel like I’m appropriating something that’s really a collaboration. All my films have been collaborations with my actors, but I hope audiences realize how much this film really owes itself to Kristen. In a certain way it was inspired by her, in a sense, because we had worked together on Clouds of Sils Maria and I got to know her.

And I realized that there was some bond between us, something that was happening. I mean, we are definitely not of the same generation or the same background, but there is something like siblings about how we function. I really wanted to extend that. And then I sat down and began writing this story which was about a young American girl. And my experience in knowing young American girls is mostly Kristen. So it became something.

You’ve dealt with familial grief as a subject matter before, like in the wonderful Summer Hours. But where did the idea to add a thriller element come from? There’s an iPhone in Personal Shopper which is like a Ouija board. It’s amazing.

The thing is that Kristen’s character was lonely from the start. What turns her on is transgression, doing something forbidden. I think she accepts and understands it but also struggles with it. This is also a movie about solitude.

I liked the idea of this ghost world we live in, which relates to the text messaging in the film and also the communication we have with someone who’s not really there and who we don’t know. I like the idea of her loneliness being informed and inhabited by the world of modern communication. I liked it in artistic terms but I think it also deals with the strange ways that our lives have changed. The tools of communication have changed our brains and our way of living and how we connect with each other. It’s a major dimension in the evolution of modern humanity.

What should audiences keep in mind while watching Personal Shopper? People might not know there’s a supernatural element in the film.

That’s true but I think there have always been ghosts in my movies. There are always doors between things known and things unknown. One thing audiences should keep in mind is that they won’t get all the answers. I think movies are more about questions than answers. Movies have been helping me to think about the world and question the human experience for my whole life. That’s hopefully what I share with an audience.