Kristen and Olivier Assayas' interview with the Washington Post 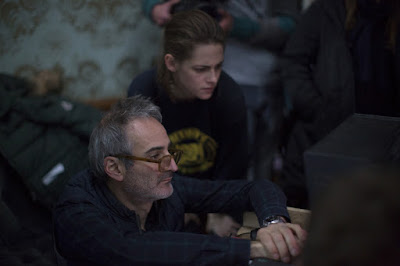 But it would be a mistake the call “Personal Shopper” a ghost story in any literal sense, says Assayas, who sat in on a conference call with his leading lady to correct misimpressions about the new film. Despite the presence of an ectoplasm-spewing poltergeist, “Personal Shopper” is, according to the 62-year-old filmmaker, less an art-house version of “Ghostbusters” than a metaphor for “visibility and invisibility.”

“It’s a story about someone who gradually manages to comes to terms with herself, and to understand her identity and, eventually, even her own femininity,” Assayas says. “I’m using the conventions of genre film because it’s the best way to convey inner fear, inner anxieties and so on and so forth.”

If the title also is a metaphor, it’s an especially apt one. After all, is it not the task of the personal shopper to channel the personality — or at least the tastes — of another individual? In the film, Maureen is shown studying the work of Hilma af Klint, a Swedish painter who claimed that her pioneering abstractions were commissioned by beings from the astral plane, as well as that of the writer Victor Hugo, who believed he could communicate with spirits of famous dead people. Isn’t channeling, in a manner of speaking, what every actor does?

According to Stewart — who says she’s not sure whether she believes in ghosts — the answer is a resounding yes.

“I find it really self-aggrandizing and idiotic for self-proclaimed artists to take an immense amount of credit for their work, in a way that is self-celebratory,” says the 26-year-old actress, who in 2015 became the first American to win a best supporting actress César — the French equivalent of the Oscar — for her performance in “Sils Maria.” “Really, you’ve just been on the receiving end of something that passes through you.

If man cannot judge “Personal Shopper,” he certainly has tried (though the scorecard is, so far, pretty mixed.) An early audience booed the film after a media screening at last year’s Cannes Film Festival. Then, the following night, the film’s festival official premiere was met with a five-minute standing ovation.

As an actor, Stewart says, she takes such ups and down in stride, and compares her best work to participating in a kind of seance-like trance. “There’s never been a time when I’ve done a scene and looked around the room and gone, ‘Ooh, we nailed it. We should be so proud of that.’ What you do is you look around and go, ‘Oh, my God, did everyone just feel that? Did everyone feel the same way?’ Once you realize that you did, and that you’ve made this connection, it always feels spiritual. It’s like, ‘Wow, we’re so lucky that we were open enough to let that pass through us.’ ”

Whatever accolades Stewart has received for the film — and more than one critic has called her performance mesmerizing — the actress gives all glory not to God but to Assayas, who says he wrote the part of Maureen, a profoundly lost and troubled soul, specifically for Stewart. “Kristen has such incredible control of what she’s doing,” he says, “at the same time as she’s following complete freedom. It’s a mix that’s extremely uncommon.”

Stewart describes Assayas’s way of filmmaking as arising less from the impulse to tell a preconceived story than out of an interest in asking open questions. “In this case,” she says, “there was the [ghost] subject matter, but, more importantly, there were really pointed questions. But every single person on the crew — every single cast member, myself included, and Olivier — we all had different responses to these questions. Whether our responses to them were the same or not didn’t actually matter. They defined the movie, but didn’t alter our course. What we ultimately discovered was that everything was a revelation, rather than an accomplishment.”

Not that there’s anything wrong with making movies where everything is cut and dried, Stewart says. Ceding complete control to a director can be just as liberating as letting the spirits move you. “I’ve been involved in films where a story sort of preexists and is somewhat finite, and you’ve been hired to function as not much more than a mouthpiece for a filmmaker,” she says. “You feel that control, and it’s not always stultifying, ironically. Sometimes it’s actually really satisfying to hit something hard really hard for someone, and to do it in a way that is controlled by them.”

On the other hand, Stewart says, she has come to realize that her greatest strength now lies in what she once saw as her greatest weakness: that sense of painful awkwardness that comes from being a “naturally shy” introvert. And how exactly did she gain that insight? Only the hard way, she explains: by making bad movies. “Anytime anything was super planned out, or seemed like a great idea on paper and there was nothing that could go wrong with it, it always ended up being trite and empty and embarrassing and so not worthwhile.

“I’m much more comfortable,” she says, “being uncomfortable.”