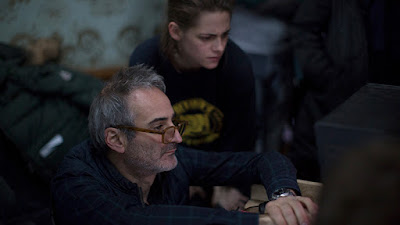 Seeing Personal Shopper and Irma Vep (1994) in close succession at the Toronto Film Festival made me curious about how conscious you are of your past work when creating something new.

I’m really interested in this dialogue between my movies. It’s important for me to have a notion of how my movies echo one another. I’ve been lucky to write all my films and more or less make movies with the same freedom of a novelist writing his novels. Every single movie I’ve made is like a part of this one movie, which includes the present, the past, the future—mapping the world in its own way. What excites me when I’m making a film is that it covers ground I have not covered before. It’s part of the same energy, but I’ve moved the stage somewhere else.

How did you approach the supernatural elements in Personal Shopper?

I wanted to take the subject seriously. I didn’t want to make it a genre element or something weird or far-fetched. I wanted to make it feel like part of everyday life, to set the film in a world where people do believe in the existence of ghosts, where no one questions it. And for so many people it’s not a strange thing. We all have our ghosts; it’s not a matter of belief. We live with our own ghosts, and we live with our imaginations, our fears and anxieties, and what we call ghosts are a mixture of thedeparted and how they connect with our own inner world.

To me, “ghosts” is a code word. We know there’s much more to reality than what is actually visible, and that’s proven by science—it’s not some kind of weird fantasy. So we certainly have some relationship to forces that we don’t completely comprehend.

In many ways, the film is a companion piece to Clouds of Sils Maria. How did your experiences making the two films differ?

It’s a bit different in the sense that Clouds of Sils Maria is a sort of comedy, a comedy about aging. I don’t think it’s a lighter film than Personal Shopper, but it’s different because it’s a movie about the dynamic between two characters. I think that Personal Shopper is like a continuation of the darker undercurrent in Sils Maria. When I was making Sils Maria and when I was making a movie like Irma Vep, I was pretty conscious of the invisible forces that drove the characters, even though in the films they are beneath the surface. I think I needed at some point to make a movie where I externalize the inner process. Strangely, Personal Shopper is a much simpler film than other movies I’ve made, but in many ways it’s also a film that touches on something very personal and also represents how I work and how I function as a filmmaker and a person.

Kristen Stewart is terrific in the film, and so much of its momentum is dictated by her physicality—which is remarkable, considering a lot of the action is happening on a phone screen.

I knew I could trust Kristen with that. It was so difficult to find the right balance and to structure it. It’s a movie where every single nuance echoes within the whole film in ways that I did not expect. I also didn’t realize the complexity of what I was asking Kristen to do. I think she was possibly more aware of it than I was, because when you’re an actress and you read a scene, you visualize it or embody it in the preparation process. But when you write, you have another perspective, and you don’t discover the practical aspects of it until you’re working and shooting. Kristen has this unique way of inhabiting the screen, of using her body within the shot. She has this extraordinary way of blending into the shots like a dancer, even if it doesn’t look like dancing.

Can you talk about your approach to technology as a means of storytelling in the film?

I use my phone like everybody else. It’s an extension of our memory, of our imagination. I’ve made a couple movies that were more like period pieces—even a film like Sils Maria is in a time zone of its own—but this film was an opportunity to deal with modern characters in the modern world. Looking things up on the Internet when you’re doing something else—it’s so much a part of how we function. It’s part of our world in ways that are getting stranger and stranger; it’s a visualization of our thought process. So from the moment I started making this movie about someone who’s alone, someone who’s lonely and in the process of reconstructing herself, that reconstruction was part of her inner dialogue, and part of her inner dialogue is externalized on the Internet and in images on a phone.

I grew up in the countryside, and I watched movies on TV. A lot of my education in classic cinema came from stuff I saw on a small black-and-white screen. I would go to the suburban Parisian theaters and watch mainstream movies. I remember all the kids of my generation discovering Cinerama movies like Ben-Hur. I think my first memory of cinema must be of seeing Ben-Hur when I was around six; it was very impressive and was on such a grand scale. When I was a teenager, I could relate more seriously to what I genuinely loved in cinema and what genuinely attracted me. It had to do with independent American films of the seventies that were connected to the counterculture, a lot of post–Easy Rider stuff. They had a sense of freedom. When I was a teenager, the energy of the French nouvelle vague had already passed. When I was growing up in the seventies, it was a different world, and what captured those times was that kind of cool, hip, semi-experimental independent film.

You transitioned from writing about films as a critic at Cahiers du cinéma to making them. Was that always your goal?

Writing about films was an accident. I always wanted to make films. I didn’t go to film school; I studied French literature and painting, but cinema I discovered on my own. I started making short films, and I started thinking there was something not completely mature about my understanding of cinema. So the opportunity of writing about films forced me to think about cinema and learn about it in a deeper way than I hadbefore. In that sense, I’m kind of self-taught when it comes to theory and history.

How do you think about filmmaking in relation to other arts?

My filmmaking is generated by my relationship with other arts. The reason I’ve chosen cinema, as opposed to painting, which could have been an option, is the way it records human emotion and its collective nature, which is extremely important to me. Also, the documentary aspect of cinema: whatever story you’re telling, it needs to be some kind of reality in front of your own eyes.

Do you have a favorite part of the filmmaking process?

My favorite part must be editing, because it has the essential qualities of writing but without the doubts or the sense of being out of focus. When you get to the editing room, it’s done, it’s finished, you have all your material, and you can write with it. I just love it. And gradually the film takes shape like a painting in front of your eyes, but you don’t have the pressure of finishing on time or getting the shot or losing the light or the crewbeing on strike.

What was the last movie you saw that you loved?

A recent film I really like is Toni Erdmann. I’ve always loved the work of Maren Ade. I’ve seen her previous film, which I loved, but I think Toni Erdmann is onanother dimension. Once in a while something comes up that has this strength and originality and is daring. That’s what keeps movies exciting.

I read that you worked on a new film with Roman Polanski. How was it collaborating with another filmmaker in that way?

I thought it would be difficult, but it was actually extremely pleasurable. I really liked the process. I never function with cowriters; I don’t like the dynamics of it. But here, with Polanski, it made complete sense. He had a very clear idea of what he wanted, and he listens. It’s his way of working, so he’s familiar with the process, and it was very simple, obvious, and pleasurable for me. I don’t think I would do it again any time soon, but this one time I loved it.