Olivier Assayas' talks about 'Personal Shopper' and Kristen with Vice 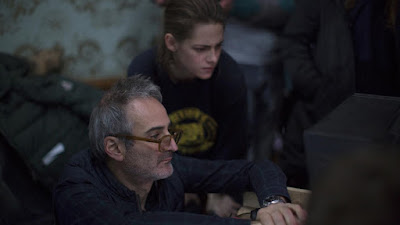 Olivier Assayas has never heard the term "ghosting" before. You would think someone would have brought it up to him anytime between now and last year's Cannes, since his new movie, Personal Shopper, involves Kristen Stewart getting quite literally ghosted. That is, she gets into a frantic, voyeuristic, threatening, and sexually charged texting conversation with a ghost, who is possibly her dead twin brother. As weird as that sounds, it translates to the screen in a magnetic way thanks to Stewart's brilliance in every frame, Assayas's devoted gaze as his lead actress tries on beautiful clothes, and his fashionable sensibilities while unraveling this chilling story.

This is the second time Assayas has worked with his new muse. In 2015, Stewart's role as a personal assistant to Juliette Binoche in The Clouds of Sils Maria won her a prestigious César Award (basically the French Oscars), making her the first American actress to do so. Personal Shopper is a far more daring and experimental turn for Stewart, whom Assayas cites more as his collaborator than actress. And because this is an Assayas film, he doesn't give us clear answers in his 21st-century mystery. And he doesn't just stay in just one genre lane—whether it be horror or thriller or a coming-of-age story (even the makeover montage is nothing like you've ever seen before)—or even a single medium, using séances as inspiration in the ghostly scenes and shooting long back-and-forth exchanges that take place on the iPhone.

Ahead of the film's solid box office opening this past weekend, we sat down with the acclaimed French director to talk about his new movie, texting etiquette, and working with Roman Polanski.

VICE: The film is more than just fancy clothes and texting, but I sound so silly whenever I try to describe the movie. Did you have any trouble getting your vision across before having the movie made?

Olivier Assayas: Well, not really. Kristen Stewart was immediately onboard, and we were making this film for very little money—in the $5 million range. If I had to do pitching, I would have been in trouble.

Have you seen Elle? It reminded me of that a bit: How women deal with grief or loss, and how sometimes it makes no sense to other people.

Yes, I've seen Elle. I think the film is, ultimately, exactly as you say. It's really someone else's coming-of-age story or just someone who, through grief, becomes herself again. I've used various elements—anxiety, fear, whatever—to help the audience share those very basic emotions. And then I tried to convey that through the genre elements.

Is it weird that people are just starting to write about Kristen Stewart like, "Turns out she's actually a good actor" after your films?

I always loved her. I did not know how far we could go together. I had seen her in the first Twilight film. I had seen her in Into the Wild, and she was amazing. And I also really liked her as young Joan Jett in The Runaways. I thought she was getting that kind of punk energy so right. I always thought she was a very special actress. How far she could go, I had no idea. I discovered it while we were shooting The Clouds of Sils Maria. I realized every tiny thing she had to do, she would just turn it into something that was completely cinematic. I don't think I invented Kristen or whatever. It's really her talent and hard work, but I think I was the right person at the right moment because I could tell her that it's OK to be herself.

Right, it's much weirder material.

Yeah, that scene where she tries on clothes was very much a Kristen creation. I said to Kristen, "Don't worry, just take your time, do it however you want, and I will edit it." And then, when I saw her doing it, I thought, Oh my God, I'm not going to edit that. She made something out of every single movement. I mean, that's what Kristen does; she's like a dancer. She also has this very precise awareness of how sexy a moment could be. And she micromanages it in a brilliant way.

Do you know the term "ghosting?"

OK, say you're dating someone, and you're texting or communicating with them, then they suddenly stop talking to you. That's what you call "ghosting." I kept thinking you bring ghosting to the next, literal level in your film.

You decided to include read receipts in there, which is often considered rude. I guess that's perfect for a ghost to do. Were you thinking about that specific texting etiquette?

Well, what I wanted to capture ultimately is the complexity of that specific form of communication. I think I had an intuition of it, but I didn't realize it until we were actually shooting the film. When I got into editing it, all of a sudden every tiny nuance echoed in very complex ways. People are so used to communicating through text; it's an experience we all share… every tiny nuance of how you respond, how you don't respond, how you delay responding. I wanted to be able to reproduce on film the complexity of that language.

You use a CGI ghost, which is obviously not your usual trick. How did you direct that scene to get exactly what you wanted?

It was a complex process. I didn't want to connect with contemporary specialist acts; I wanted to be able to connect with something a bit rawer, cruder, like spiritualist photography at the end of the 19th century. They used photography to reproduce what they imagined they saw during séances. So I used that kind of photography and used the description by mediums of what they saw during the séances. I think ultimately what we ended up putting on the screen is as close as possible to the way the spirits looked like in the imagination of mediums.

In lockdown in LA due to COVID-19 with 'Happiest Season' to be released in the US on Hulu on 25 November.