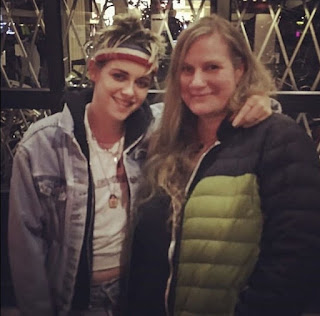 The actress Kristen Stewart calls herself a “pseudo-student” of Yuknavitch’s, and flew to Oregon “with very sweaty hands” to meet the writer after reading “The Chronology of Water” on a film set. In the five years since, she has spent time with Yuknavitch’s family.

“She has opened up to me in full. I wish I knew her in so many stages of her life,” Stewart wrote in an email, adding that her mentorship has “changed or at least helped shape my relationship with expression itself. Not a small thing.” (Yuknavitch feels similarly, saying she believes the two have “a kindred art link.”)

Later this year, Stewart will direct the film adaptation of “The Chronology of Water,” which she also wrote. Yuknavitch is a story consultant on the project.

“Traditional structure was something that I always felt would ruin how uniquely true it feels,” Stewart said. “So it has been tricky!”

Read the full interview at the NY Times

Posted by Mods TeamKristenSite at 1:32 PM No comments: 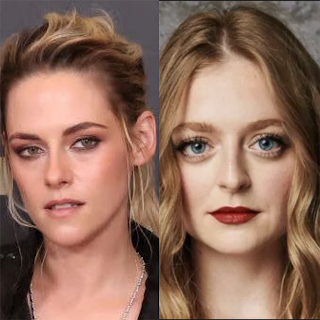 The film written by Glass and Weronika Tofilska is reportedly set in the world of bodybuilding, examining a romance fueled by ego, desire and the American Dream. Film4 developed the project alongside the filmmakers and will co-finance alongside A24, which is producing and handling the pic’s global release. Andrea Cornwell is also producing for Lobo Films, alongside Oliver Kassman for Escape Plan Productions.

Baryshnikov starred as Lavinia Dickinson, sister of poet Emily Dickinson (Hailee Steinfeld), in Apple’s Peabody Award-winning series, Dickinson, which came to the end of its third and final season last December. The actress made her feature film debut in Amazon’s Oscar-winning Manchester by the Sea, written and directed by Kenneth Lonergan, also appearing opposite Maggie Gyllenhaal in the Netflix indie The Kindergarten Teacher, written and directed by Sara Colangelo. Additional credits include Todd Solondz’s Wiener-Dog and the series Prodigal Son, Superior Donuts and Good Girls Revolt.

A24 has recently released titles including the acclaimed Michelle Yeoh starrer Everything Everywhere All At Once from Daniels, which has come in as its highest-grossing film yet, and Alex Garland’s horror, Men. Upcoming releases include Ari Aster’s Disappointment Blvd. starring Joaquin Phoenix, and Celine Song’s directorial debut, Past Lives.

Baryshnikov is represented by CAA and Brookside Artist Management.

Posted by Mods TeamKristenSite at 3:02 AM No comments:

Video: Scott Speedman and David Cronenberg talk 'Crimes of the Future' and mention Kristen with Collider

Posted by Mods TeamKristenSite at 3:40 AM No comments: 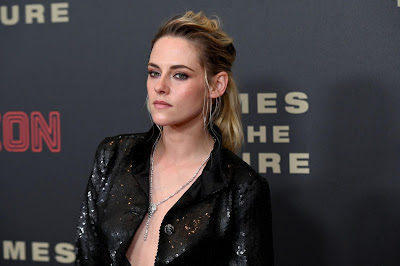 “After an incredible first season of Hart to Heart, I couldn’t wait to get back in the chair to have more raw and hilarious conversations with some of the best in the business,” Hart says. “There is something special about sitting down with a glass of wine, it brings out honesty and hilarity in guests and delivers real conversations that you won’t get anywhere else.”

In Season 2 of the hit show, the actor will once again sit down with guests ranging from comedians to musicians to A-list actors. In each episode, Hart and his guests engage in open, insightful, humorous, and unfiltered hour-long conversations over a glass of wine in Hart’s wine cellar. And just like Season 1, the guest list is stacked this season, too.

Season 2 will also include conversations with Mark Wahlberg, Tyler Perry, Tracee Ellis Ross, Simu Liu, Saweetie, Kristen Stewart, Mike Tyson, and Seth McFarlane. People like Jay-Z and Davidson don’t normally do a lot of interviews or TV appearances of this sort, but how can anyone say no to Kevin Hart? As viewers saw last season, no topic is off-limits and the guests don’t hold back when openly discussing their careers, family, loss, and love.

Posted by Mods TeamKristenSite at 4:11 AM No comments: 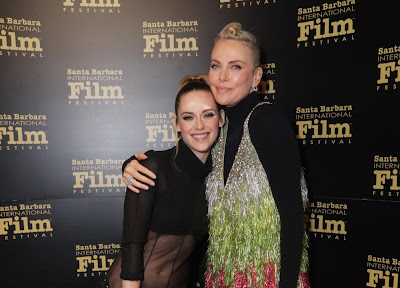 The festivities, taking place on the Universal backlot, will include a screening of “Jurassic World Dominion” following a Q&A with the film’s director Colin Trevorrow and stars Bryce Dallas Howard, DeWanda Wise, Jeff Goldblum and Mamoudou Athie and writer Emily Carmichael.

Wyclef Jean is set to perform during the after party.

“I’m so grateful that we’re able to bring this event back for a second year in support of CTAOP and it’s going to be a really fun night,” Theron tells me. “We have a performance by Wyclef Jean and ‘Jurassic World Dominion’ — what’s better than drinking, dancing and dinosaurs? I’m honored that we’re all able to come together, so we can continue our work for youth in Africa.”

The menu will be curated by chefs Andrew Zimmern and Melissa King and is inspired by international street food.

CTAOP’s mission is to support the health, education and safety of young people in Africa.

Posted by Mods TeamKristenSite at 1:53 PM No comments:

David Cronenberg talks 'Crimes of the Future' and mentions Kristen 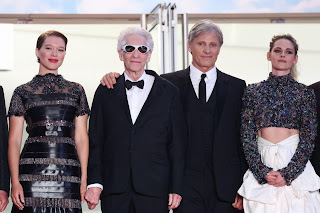 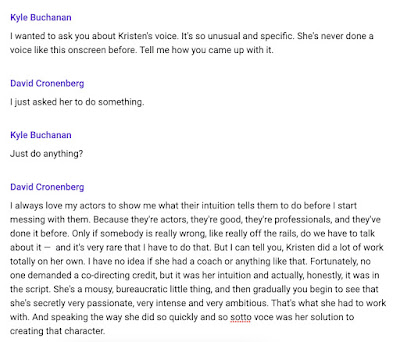 Kristen Stewart’s performance is especially interesting. What direction did you give her for the role?

For Kristen? Not much. In the script I describe her mostly as a bureaucrat: seemingly very timid, very shy. And then gradually you realize that she is in fact very ambitious, very Machiavellian, very passive-aggressive, and ultimately very devious and will go really far to get what she wants. And it is a strange thing that she wants. Kristen just understood this. The way she played with her voice, that was totally her.

The way I work with actors, I don’t tell them anything at first. I want them to show me what they think. I trust their intuition. I’m hiring them because I think they will be able to bring these characters to life. For me to then control them like a puppet, like Hitchcock used to say he did, is counterproductive. Like, why would you do that? You’ve got a brilliant actor. Why stifle them by telling them how to deliver their lines or whatever? It doesn’t make sense to me.

Posted by Mods TeamKristenSite at 4:56 AM No comments: 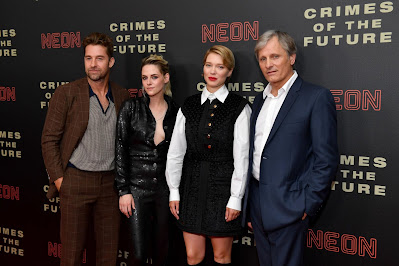 Kristen Stewart said at the Cannes press conference for the film that the cast would get together after shooting and try to make sense of the film together. What did you all unlock together through that process?

We did do that, but also, we’re coming down from the day, having fun, going out for dinners. Trying to get away from work more than anything. I think she talked about how she didn’t know what she was doing, but I think she did. She knows what she’s doing, man.

Excerpt from the full interview.

You mentioned the humor, and the macabre comedy in the film is fantastic. Is that evident on David Cronenberg’s screenplay page, or is it something you find on set?

Mortensen: I mean, some lines in the script are funny. I laughed when I was reading some of it, and then some of it has to do with the way things are expressed. For example, I’m reading on the page the character of Timlin or Wippet, but then when we’re doing our first scene, the way that Kristen [Stewart] plays Timlin — her voice, her body, the look in her eye — it was unexpected, perfect, and it was funny at times. And Wippet talks a lot, he’s got all these ideas, and he’s nervous, but a lot of that came from the performance that Don McKellar came up with. When I read it, there were some moments with a sort of a dry humor. But then there were many more in the doing because of what other performers brought or what David inspired. He’s very careful, always, about his casting. He got together a really good group of very diverse actors with very different approaches and backgrounds. He’s got a gift to make each person feel comfortable. He adapts to what they seem to need because he’s just trying to get good performances out of each of them and have them be relaxed. It’s a very particular skill. Not that many directors have that gift.

Speaking of the ensemble, Kristen Stewart has said the cast would get together and talk about the script, trying to figure it out. Was there anything that you all discovered in that collaboration?

Mortensen: You and I were kind of a little bit off on our own a lot. But sometimes, you guys talked. I don’t remember discussing what the movie was about a lot.

Seydoux: No, not really; we didn’t talk about it a lot.

Mortensen: Maybe some of the ideas.

Seydoux: Sometimes we were like, “Oh, yeah, I thought this and that.”

Mortensen: Or, “It was interesting that that happened. Maybe it means something else for the next scene.”

Seydoux: Kristen, when we were in Cannes, said, “It’s funny because now the movie feels very clear and easy to understand.”

Seydoux: She said, “I thought it was much more complex.”

Posted by Mods TeamKristenSite at 11:44 PM No comments: 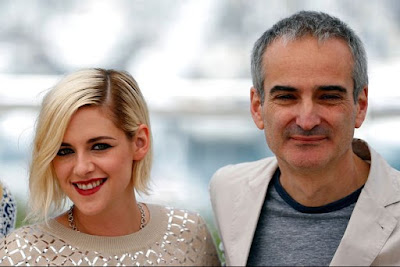 Excerpt from the full interview:

As for Mira, many viewers might assume she’s a stand-in for Stewart — we first see Mira arriving in Paris wearing shades and a slouchy beanie, nursing a broken heart after being dumped by her girlfriend. It’s a resemblance Assayas both soft-pedals and does not refute.

“There’s a little bit of it but not really,” he said. “This was written with Alicia in mind, but then you can’t escape the fact that my experience of an American movie star is Kristen Stewart. I don’t know that many of them, and she’s a friend, and I love her and I admire her. So yes, there must be elements of Kristen — Kristen is haunting the film.”

Posted by Mods TeamKristenSite at 9:30 PM No comments:

If you are part of the LGBTQ+ community and are psychic, a medium or paranormal involved you can apply to be cast here.

Posted by Mods TeamKristenSite at 9:23 PM No comments:

'Crimes of the Future' to be released on 3 June in the US. | Production on 'Love Lies Bleeding' is due to commence on 13 June in Albuquerque, NM.
Follow @teamkristensite 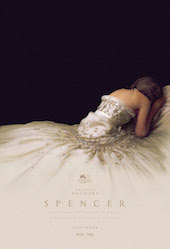