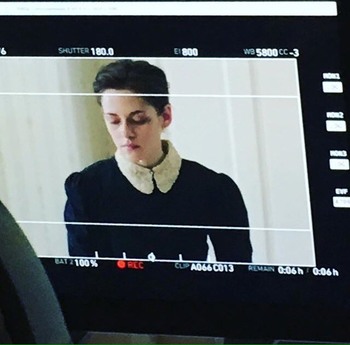 JC Davis (Hairstylist) "A monitor shot of  #kristenstewart from the film #Lizzie. I was in charge of taking care of her hair for her character. Yes, she is just like one of us. Very nice, hard working gal. This was my first film after my husband was killed. She was very caring."

Source
Posted by Mods TeamKristenSite at 2:05 PM No comments: 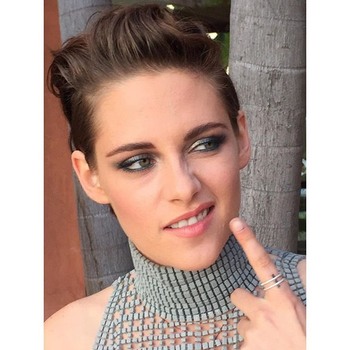 
Photo was taken in preparation for the Hollywood Film Awards held on 14 November 2014 in LA. 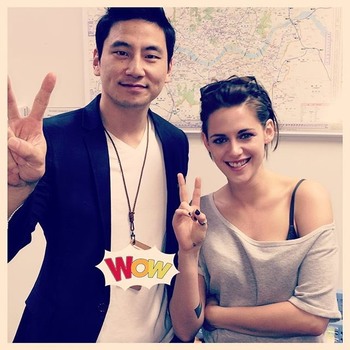 Source
Posted by Mods TeamKristenSite at 11:41 AM No comments: 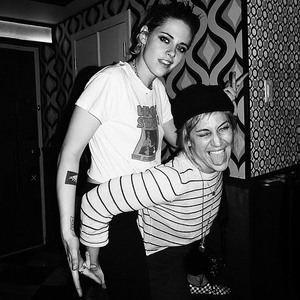 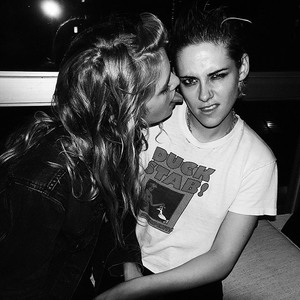 Source
Posted by Mods TeamKristenSite at 4:10 PM No comments: 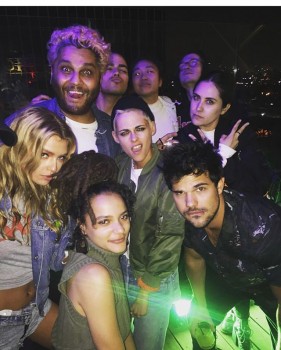 Source
Posted by Mods TeamKristenSite at 1:21 PM No comments:

It seems that 'Cali' might be in development again (via Production Weekly). Kristen was announced in April 2012 to be starring in the project. In August 2012 Kristen dropped out of the project and it was never re-cast or done.

There is a new production company attached to 'Cali' and the 'American Ultra' director, Nima Nourizadeh, appears to be attached as director.

It appears production will start in August 2018.

Thanks to TeamK_1
Posted by Mods TeamKristenSite at 1:21 PM No comments: Source
Posted by Mods TeamKristenSite at 3:47 PM No comments:

It’s 10 a.m. on the first Saturday of Sundance and one of the most shocking scenes at the festival is rolling on screen. Audiences are watching a nude Chloe Sevigny raise an axe in the crescendoing murder sequence of Lizzie, a film that attempts to detail how the infamous Ms. Borden came to influence history—and our treatment of female criminals—forever. Indeed, the real-life Borden was never charged for the 1892 crime, so her guilt is debatable, but her permanence as a gothic icon is not. In Sevigny’s take on the still-unsolved mystery, a love story between Borden and her housemaid, Bridget (Kristen Stewart), drives the story, offering an alternative approach to the motivations that may have driven the young woman to kill.

The film begins when an Irish maid comes to work for the Borden family. Constantly on thin ice with her strict father Andrew (Jamey Sheridan) and stepmother Abby (Fiona Shaw), Borden is frowned upon in the town. When she goes to the theater one night alone, she garners stares for being an unmarried women who is, well, out and alone. The scrutiny causes her to have a seizure and she’s rushed home. This is when her relationship with the maid, Bridget, begins to blossom.

Throughout the film Lizzie’s father becomes increasingly paranoid and frustrated with his daughter and, worse, abusive to Bridget. As their affections grow, so does the tension in the Borden house, creating a climate apt for emotional upheaval.

Playboy Contributing Writer Meredith Alloway had a chance to sit down with Sevigny at Sundance to discuss her quintessentially terrifying new role. “I just knew that I had to play her. I felt so much empathy for her and her circumstances,” Sevigny says. It’s this empathetic approach to the character that makes the film more complex than some of Hollwood’s previous attempts. And at a time when women are breaking barriers on and off screen, Lizzie feels strikingly relevant.

You’ve referred to Lizzie Borden as a gothic icon, and I love that. Gothic cinema and its characters seem to be making a comeback. Why do you think that that is?

In political turmoil, similar to in the 1960s, horror films experience a resurgence. Whenever there’s a political upheaval, people go back to that. American Horror Story blowing up is an example. I think people are just discovering that.

Some might call Lizzie Borden an anti-hero and there’s a growing trend toward featuring those female archetypes in film, I, Tonya being one example.

Is Lizzie Borden a character you’ve wanted to play for years?

Yes—actually, a friend of mine showed up at my house one year for Halloween dressed as Lizzie. She just had a photo of an axe safety-pinned to her back, and she has really red hair, as Lizzie does, and this Victorian outfit. We started talking about Lizzie and doing some internet research. I realized the murder house had become a bed and breakfast. My boyfriend at the time and I stayed in the house and as part of the experience, you tour the house. As they were telling the story of this woman in this house and these murders, I just knew that I had to play her. I felt so much empathy for her and her circumstances.

What was the untold story you wanted to explore here? The writer, Bryce Kass, has said there are a lot of black holes, especially related to the actual murder.

The murders are still unsolved and there are so many theories, but I don’t think there’s one that hasn’t been explored because there are so many books. Bridget was in the proximity of where the murders happened and a pivotal witness in trial. We wanted her to be involved, and everybody loves a good love story. We wanted to give Lizzie that escape. We’ve always thought of her as tortured and having no love and being in this old household. Then there were accounts of her traveling through Europe and having close relationships with women. She did develop a relationship with actress Nance O’Neil, and her sister abandoned her after her trials, supposedly because she disapproved of her lifestyle. So there were a lot of things that pointed to that. Also, it was more about smashing the patriarchy.

Would you say the murders were justified?

I am still a little worried about that, if there’ll be a feminist backlash.

But what was your choice playing Lizzie? Was it justified to her?

I think she saw that it was her only way out. She knew the abuse that was going on with Bridget, and she wanted to save Bridget and herself. She had this idea of them running off into the sunset together.

You spent eight years pitching the film. It’s great that producers are starting to sign on to feminist narratives, but in that time, would anyone listen to you?

Getting a movie made is so hard, and one of the harder things is pushing control over to other producers. Filmmaking is collaborative. There are a lot of things in the original script that didn’t make it into the final cut, and it’s hard to let go of those things. We’re lucky we got Kristen; without her, we probably wouldn’t have gotten the movie made. So, god bless her for that. Now, I think people are more interested in telling these kinds of stories and having female leads. And I’m happy the movie’s coming out at this moment, it’s very timely, and I’m hoping the world will see it.

What didn’t make it into the film?

Certain lines, scenes, emotions. There’s a whole other storyline, an entire other aspect to Kristen and my characters’ relationship where [Bridget] questions what they’re doing, whether it’s immoral. It was beautiful and added depth to their relationship. That was hard to let go of.

In the film, Lizzie and Bridget exist in this bubble of sweetness amidst the awfulness happening around them. Why did you pick Kristen for the role?

I’m always drawn in by her whenever I see her on a screen. Just captivated by her. I liked our size difference and our color differences, how we would look on screen together. Also, her persona, who she is as a person. Even in casting my own short films and looking at a lot of actresses, I’m looking at who they are in their guts, wanting to choose someone who I really believe in. And I believe in the choices that [Kristen] makes. I think she’s a true artist through and through. I wanted someone who would go out on a limb for me, go to bat for me, and she did. She said, “You’re the reason I’m here doing this movie, Chloe.”

We are kindred. She’s definitely a misfit, and I feel like now that I’m getting older—well, I don’t know if I can claim that anymore. I think we are more than just actresses…I hope we are, you know what I mean? There was a real—I don’t want to speak for her—but there was a real desire between us, an admiration. So there was intimacy, spark and chemistry.

How did it feel showing this in front of audiences when #MeTo is top of mind, especially since this film deals with misogyny and abuse?

I mean, look at the Bridget character. She couldn’t speak out and there was no one to help her. Anything that can empower women to find their voice, to seek help, or feel emboldened, I want to be a part of that. With Time’s Up—I’m not necessarily aligned with them—but I believe in what they’re doing, and if they help women with funding, lawsuits and finding their voices? I’m all for that.

Source
Posted by Mods TeamKristenSite at 3:44 PM No comments: