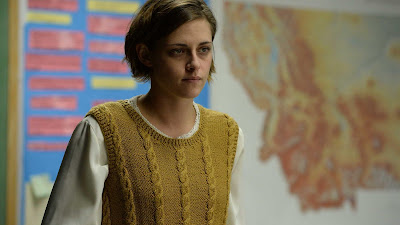 I am interested in why you choose to work in rural locations and why specifically Montana, for this film.

These stories were written for Montana so that was the natural place to go. In Montana you're really locked in by the mountain ranges, it was the least tuned in to the politics of life that I've been in in a couple of decades. You could really tune out quite easily to what was happening outside of Montana. That's not so easy to do on where I live, for a lot of reasons.

Sure, but in a way the film hits upon a certain mood of people who feel they are not being heard.
It does. The Jared Harris character from the first story is very of this moment. He's a man in his mid 50s whose has been injured and has a real complaint but cannot grasp the idea that the system is not going to work in his favour. That's not something he has been accustomed to, and he can't get around it. Whereas the people he encounters, his female lawyer, anyone that wasn't in his lot in life, would know sooner that the system wouldn't work for them. Suddenly, while he does have a legitimate complaint he can't get over it. Like it's so unfair to him in particular, as opposed to this being the adult world for most people.

Right, by the time the Native American rancher takes her knocks - she's far less expecting of the world - she's more self reliant than his character. The man is in this story with his lawyer, played by Laura Dern, and she's trying to give him legal advice. He wants something else from her; he's not hearing her on that level. He's wanting some comfort from her, that she's not interested in giving. There's a lot of miscommunications. And then there's these moments where people have a momentary glimpse into one another. There's a lot of missed moments.

Even Kristen Stewart's law graduate character understands the lack of agency in her life better than he.

This is your first time working with Kristen, but she feels entirely at home in a Kelly Reichardt film. I think it's to do with how internal she is. What do you think?

It's acting, it's all acting. It's just that she's good at it. It's - as Michelle [Williams] would say - it's reacting. She's a really good listener and she doesn't have to be doing anything. She's comfortable not showing an expression and just letting things be internal, whereas some actors as they might be in life are just more gestural and more expressive. Kristen doesn't feel like she has to be doing stuff.

Source
Posted by Mods TeamKristenSite at 1:47 AM