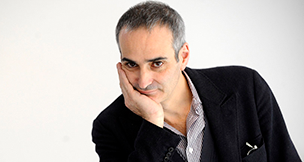 This is the second collaboration between Stewart and Assayas, after 2014's psychological drama Clouds of Sils Maria. There she played an assistant to theatre luminary Juliette Binoche, helping her prepare for a challenging role by questioning everything about her life.

Stewart is a magnetic presence throughout Personal Shopper. As Maureen, an assistant to an international celebrity, she can peer into a world of privilege while still struggling to make ends meet. As a spiritualist, in some ways a ghost hunter, she delves into an afterlife that can suddenly turn malevolent. And grieving over the death of her twin brother, she must confront her own mortality.

"She kind of popped up on the set forty-eight hours before the shoot," Assayas says by phone. "I had given her a screenplay that was 'finished' more or less, but we actually finished it on the set."

The director describes their work as a process of nonverbal communication, of operating on similar wavelengths. He praises Stewart's grasp of cinema, of "understanding what is going on within a shot. She brings such incredible pace and rhythm, she recreates the characters from inside, but at the same time she's guided by physicality, by the body."

Assayas notes how Stewart can manipulate time within a shot, expanding or contracting scenes simply on the strength of her engagement in the moment. "She knows that she can try things," he says. "She knows that she can push things. I think when you have a bad relationship with actors, they won't be as daring because there's always the possibility that if they try something stupid, you won't be smart enough to edit it out. It's all about trust. I give her as much space and time as she needs within the shot and she gives me the risks she's taking. She gives me back the trust I give her.

"A lot of scenes or moments were very much shorter or slightly different in the screenplay. Every now and then Kristen would do something and I would turn to my continuity girl and ask her how long was this shot, and she would tell me like three minutes. And I would just freak out because I didn't realize it was that long. But I wasn't bored one second, I was discovering something new that Kristen was bringing."

Stewart has never been this open and unguarded onscreen before. Riding a Euro Star train from Paris to London, she is tormented by a series of anonymous texts that probe into her fears. Assayas slowly pulls the camera in tight on her face as tears fall from her eyes. It's a challenging moment in a scene with numerous technical demands, but Stewart makes it seem effortless onscreen.

"My experience is that Kristen functions in a similar way with other actresses in that emotion comes from music," Assayas observes. "I think she needs to build up her emotions listening to specific music, put herself into that kind of emotional state.

"But that's absolutely something I would not discuss even a second with an actor and even more so with Kristen. I just don't want to know how they do it. Here's the shot, the shot is you break down. If you cry, if that's your way of breaking down, good, but if you don't cry and you break down in another way, that's fine also."

Assayas and cinematographer Yorick Le Saux filmed the sequence in a car stationed in a rail yard, using green screen to matte in traveling footage during postproduction. The director originally planned to shoot on a moving train, but trying to match lighting and exteriors made him reconsider.

"Ultimately it's much better for the actors," he says. "With a moving train it becomes a headache, you forget about the acting in order to meet a technical challenge. Instead, the way we worked we could shoot all of the train scenes in one day. Which is crazy, a lot of material, all handheld. But it's all about trying to keep the energy, keep the actor protected from the technical side."

The son of director and screenwriter Raymond Assayas, Olivier began his career as a critic. Famously eclectic over his career, he had yet to explore horror and suspense genres prior to Personal Shopper.

"When I started writing about film, what excited me the most, what felt like the most modern filmmaking, was whatever John Carpenter was doing," he explains. "Wes Craven, David Cronenberg, Dario Argento as well, but I think that Carpenter was the major influence."

Assayas asserts that Personal Shopper is not a "ghost story" or "suspense thriller," what he calls code words that restrict the meaning or intent of a movie. He prefers "collage," combining elements that will become something new in viewers' imaginations.

Referring to the gliding, subjective camerawork Carpenter used in films like Halloween, and to the many similar shots in Personal Shopper, Assayas talks about how cinematography can capture emotion using the dynamics of music and modern dance.

"Films are not just like a flat surface that you are viewing, they are open spaces where you circulate," he explains. "It's a dimension I'm consciously trying to integrate into my filmmaking.

"I like genre filmmaking because it has this kind of physical relationship with the audience," he adds. "It's something I have been obsessing with because I think it's a dimension that's missing from a lot of modern independent filmmaking."

Assayas wonders if filmmaking technique has regressed since the 1960s. "I think it has to do with a simplification of film syntax. The financial demands, the weight of the industry on filmmakers, tend to create a conventional syntax. What's exciting in filmmaking is breaking those limits."

The proliferation of screens and imagery in Personal Shopper is one way Assayas is trying to expand syntax. Elements of the plot unfold through Skype and YouTube, through Internet searches, snippets of documentaries, anonymous chats. Hitchcock never got the chance to use text messaging in his movies. As Assayas shows, texts can add a real-time urgency to suspense scenes, while simultaneously commenting critically on the action.

Personal Shopper also addresses the paradox of being overwhelmed by imagery yet consumed by loneliness. "Our loneliness is incredibly populated," he says. "So much of what we do now is interact with ideas, media, people we do not know."

Speaking at a question-and-answer session after a screening, Stewart agrees: "I think that Maureen wants to be entirely invisible and at the same time really seen. And I think she really struggles with that. It's weird, we think we have more control over social media because we have it in our hands. It gives you the impression that you're connecting, but you're totally alone when you're doing it."

Personal Shopper sets out a kind of hierarchy of imagery, from 35mm film to TV and down to the degraded visuals of a screen chat. On one level the movie points out how we relate to imagery, from the silent-screen technique Assayas employs to suggest ghosts to the hypnotic effects of LED screens.

Even so, Assayas realizes that many viewers will experience Personal Shopper in less-than-ideal conditions, perhaps watching it on an iPhone during a train ride. "Yes, but let's put some perspective on this," he says. "My first exposure to cinema, to the great cinema I admired, was through a tiny, degraded image on black-and-white TV. Watching movies on my parents' TV set, I did not feel I was not watching them. Some of them left a big impression on me.

"But that doesn't change my perspective on cinema in general. I still think that movies should be seen on a screen, as a collective experience. That's the way they were made."

However you view it, Personal Shopper continues a fascinating journey by one of the industry's more accomplished filmmakers.