Olivier Assayas talks about 'Personal Shopper' and Kristen with Dazed 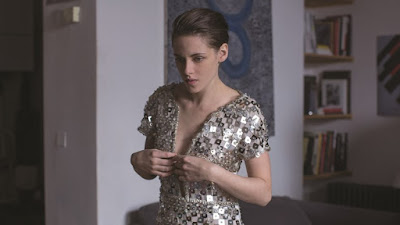 Is it true you wrote Irma Vep in nine days, and shot it in four weeks?

Do you still have that kind of spontaneity?

Olivier Assayas: I still write with spontaneity, but the problem is, because I’ve got recognition, my films are easier to finance on a higher scale. When I was making Irma Vep, it was because I had a bigger movie that wasn’t happening. We shot Irma Vep in four weeks for no money because, well, (laughs) we had no money. No one was ready to put any kind of money into that film. It was just too weird. People laughed in our face. It was unlike anything that had been done in French cinema.

Was it the same with writing Personal Shopper?

Olivier Assayas: I think I’ve kept on writing my films the Irma Vep way. I wrote Personal Shopper really fast. Not nine days. Possibly two months, maybe a little more. But it was fast. I managed to do it with the same energy. We moved from writing to preparing the shoot with a very small lapse.

Did you write it around the time of Clouds of Sils Maria, and that’s why it’s got Kristen?

Olivier Assayas: In the end, yes, but I didn’t see it like that at the time. After Clouds of Sils Maria, I had another project which was supposed to shoot almost back-to-back.

Was that the Robert Pattinson film?

Olivier Assayas: Yeah, Idol’s Eye. And the film fell apart at the last minute – 24 hours before shooting, which was a nightmare. So I came back to Paris and started working on something else from scratch. That meant using the energy of Clouds of Sils Maria. I wasn’t writing specifically for Kristen at the time. I was writing for someone like Kristen. I had no idea if she would want to make another movie with me right away. I had no idea if she was available. I had no idea if she would be interested in this kind of film. But then, looking back, I don’t think I would have written a character like Maureen if I had not had the experience of working with Kristen. She inspired that character.

Olivier Assayas: No, she’s not.

Could you expand on that, and also what makes her unique as a performer?

Olivier Assayas: Kristen is incredibly authentic. She has to find the truth of the character within herself. She has a hard time playing someone that’s too far away from her. She needs to have a sense of truth of whatever she does and the way she says things and the way she interacts with the other characters. That’s something that can only come from inside.

What’s unique about her is she’s a completely intuitive actor. She’s so attuned to the vibe of the moment. She likes doing thing once. When she starts doing something for the second or third time, she becomes insecure. It’s really like a flash. She also has a very unique way of interacting with the camera. She has a way of using her body – her pacing is unique, and her body language is extraordinary.

There’s very accomplished thumb acting during the text messaging sequences, the way they tremble with fear. Were those Kristen’s thumbs?

Olivier Assayas: Yeah, it was her. She said, “My thumbs are the co-stars of this movie.”

Why does she always add a space before each question mark?

Olivier Assayas: I didn’t ask her. That’s the way she types. That’s how you would do it in French. So I suppose it’s the French culture that rubbed off.

A lot of filmmakers complain that the convenience of mobile phones ruins storylines, but Personal Shopper uses them to create a new dramatic dimension.

Olivier Assayas: I don’t know why they wouldn’t make narration easier. They’re part of real life. You can’t make movies that are detached from real life. Maybe it’s disturbing for an older filmmaker who is attached to an older world view. Yes, the use of cell phones has distorted that world view. But they are nonetheless part of our life. It’s like saying it was more exciting when there were horse carriages around, as opposed to cars. It’s the way the world changes. Cellphones don’t simplify the world. They complicate it. If you deal with them, you deal with this network that didn’t surround us before.

Is that why you’re moving between period pieces and modern movies? In Clouds of Sils Maria, there’s also a lot of anxiety over technology.

Olivier Assayas: Yeah. After doing two period pieces – meaning Carlos and Something in the Air – I needed to go back to the modern world. But Clouds of Sils Maria was kind of halfway. It’s in this abstract time warp. Whereas Personal Shopper is pretty much today, and defined by the tools we use to communicate and work. They’re an extension of ourselves, and it defines modern characters.

Why is Personal Shopper set in the fashion world?

Olivier Assayas: For two reasons – and they’re conflicting reasons. One reason is, I wanted Maureen to have… not exactly a stupid job, but a very mundane job; a frustrating job that has to do with surface. The fashion world is to do with surface, and it’s not even her surface; it’s the surface of her boss. She doesn’t like her job, but she needs to do it to make a living. She finds solace and comfort in her own dream world, in her imagination, in ideas and art – like we all do.

But the thing that makes her ambivalent is that there’s also art in the fashion industry. It attracts her, like a magnet, because it’s also part of her own inner conversation; she’s questioning her femininity, and her femininity is connected to her attraction to fashion.

In the credits, you thank Thomas Bangalter from Daft Punk. What role did he play in the film?

Olivier Assayas: Thomas is a friend. At some point I asked him to score the film. We had long discussions about the film. He was one of the first spectators of an early cut, and he made a few suggestions that I used.

Oh, really? Because apart from Sonic Youth in Demonlover, you haven’t used a score since the early 90s. What nearly changed your mind with Personal Shopper?

Olivier Assayas: For the wrong reasons. The thing is, I love the work that Thomas has done with Gaspar Noé. The movie scores he’s done are really brilliant, and he’s a very smart, talented guy. And because it has genre elements, I thought it’d be interesting to at least have a dialogue with him about it. I showed him the film, and I was pretty sure of my musical choices. He agreed with me. He liked what we did.

You’ve mentioned “lightness of camera” as something important you discovered on Cold Water. Could you explain that philosophy with regards to Personal Shopper?

Olivier Assayas: With “lightness of camera”, it’s “lightness” in general, I would say. What I’ve always been struggling with is the weight of cinema. Cinema is too many people and too much heavy equipment. Ideally, filmmaking should be made in conditions as light as when impressionist painters were painting outdoors.

You have to forget about the weight of cinema. Whenever I can, I want as few people as possible on the set. I need to have a sense of freedom. I don’t like rehearsing. I like to go straight into a scene and into the action of creating a shot. It’s for me, but it’s also for the actors. That’s the way they concentrate. If they feel the weight of filmmaking, they have a different approach to acting.

How did Kristen react to the lightness?

Olivier Assayas: I think it created a whole new space for her. I think she loved it, and that’s the reason we’ve been working together. She realised when we were shooting Clouds of Sils Maria that it opened up a new space for her. The reason she was eager to work with me again was she knew she could go even further in the process. It’s completely different from what she’s been doing in the US. Some actors need the framework, but other actors are inventive and need the space to expand. And she’s been expanding.