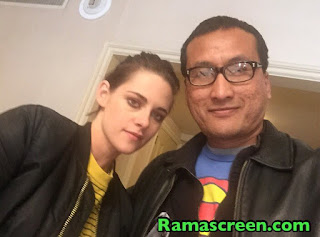 In writer/director Olivier Assayas’ new film, “Personal Shopper,” #KristenStewart basically plays the title character, a high-fashion personal shopper to the stars who is also a spiritual medium. So at the press roundtable, thanks to IFC Films, I asked Kristen Stewart, who herself is a hugely successful star most famously known for her work in the “Twilight” franchise, if she has her own personal shopper or if she’d ever hire one. Stewart says she doesn’t and further explains why...

“I guess certain celebrities would have that. People that are like extraordinarily rich and strange. But I like clothes.”

Ya, I don’t see her as the kind of celeb either. One of the things I’ve always liked about Kristen Stewart, at least my impression of her, from my having covered several of her press junkets, is that what others may consider to be a big deal, she doesn’t necessarily see it the same way.
But Kristen Stewart fully understood when she took on this role that her character did think of this as a big deal in terms of desiring or envying certain fashion style or expensive clothes.

“I like that she was like at once really attracted to something she also felt partially or potentially empty. There’s a vanity surrounding wanting to look good in clothes, this self-obsessed thing that you have to have in order to be like ‘O my god I can imagine myself in that, I want to feel that.’ So I know that feeling of ‘No, I should be the one wearing that.’ But at the same time, that’s absurd. I don’t want to be the person that thinks like that. So I have less trouble navigating that because I have access and choice which is the luckiest thing in the world. Whereas she is in a position where she’s attracted to something and servicing this thing but so much smaller and kind of resents it but at the same time she’s aggrandizing it.”

Director Olivier Assayas also chimed in, stating that Kristen’s character in this movie is the kind of person who works for people who do a lot of representation, who do a lot of red carpet stuff and since you can’t be on the red carpet wearing the same outfit every single time, they hire somebody who helps get different fancy clothes for them.

And when asked if she got to keep some of the dresses she wore in this film, Kristen Stewart only said she kept one, the dress with the harness. Frankly, I saw “Personal Shopper” only once and a while ago, so I’m not able to recall which specific dress she was referring to. But “Personal Shopper” is more than just fashion, dresses and clothes, it’s also a very unique, very different kind of a ghost story. Not the ghost-busting action type and not the Demi Moore-Patrick Swayze molding clay romance type either, but this one is very internal and very intimate. Find out for yourself when “Personal Shopper” hits theaters near you, March 10.