Kristen's interview with the Boston Herald for 'Personal Shopper' 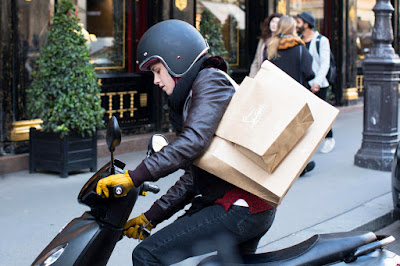 Q:  Maureen doesn’t like her job which is a universal chord, so many people are unhappy in their job.

STEWART: Maureen is in the midst of an existential crisis brought on by striking loss. She is busying herself in a sort of very mundane way with a job she doesn’t like very much because it gives her an opportunity to stay in Paris and… the contrasting world that she’s subjected to every single day couldn’t be more empty. Or couldn’t be contrastingly – you know – superficial.  There’s a resentment put towards those things that really don’t matter and she criticizes herself for that as well -- because ultimately she’s very attracted to those things.  Like beauty and aesthetic, the artful aspect is something she loves – but she kind of hates herself for loving.

Q: Is that the attraction then for her to put on the clothes of the woman she works for – because they’re forbidden?

Q: Is it super significant that they are twins and not merely siblings?

STEWART: Absolutely. I think they function like if their lives were a movie it would be a two hander. And all of a sudden that person doesn’t exist anymore and you’re half of a person.

Q:  I found it easier to accept the medium aspect of trying to connect with this vapor – and those effects are beautiful – than this texting relationship Maureen carries on with someone she doesn’t know.  Even to the point of sending a photo of her wearing a forbidden dress which could get her fired if her boss saw it. Why is she doing this?

STEWART: The thing is she has no idea who she is talking to.  So if you have such little grasp on reality, or how to define what that is, then you’re going to look absolutely everywhere and believe everything and simultaneously not believe in anything.  The possibility there is – it could be her brother, she could be having a dialogue with herself, she could be having a dialogue with, like, existence itself.  Maybe there’s a god-like presence there or something more threatening, like an evil spirit. Basically she has such little frame of reference for what’s real – because that in and of itself is impossible to define – that when she starts getting these messages, she’s willing to engage because all she wants is answers.

Also all she wants to feel is alive – and a part of anything!  Because she looks up and sees the normality default that everyone dwells in quite comfortably and she just cannot access that at all.  But she would love to.  It’s just not something she’s capable of.  So when these messages start coming in I think it’s a gauge.  It’s like she’s using it as a gauge for any foothold on anything that could be real.

Q: So she’s someone who you said was having an ‘existential crisis’ but it seems like she’s heading for a walking nervous breakdown.

STEWART:  Yeah, that crisis is leading her to a breakdown absolutely.

Q: When you hosted SNL and did that opening where you dumped on Trump and declared you were gay, I wonder if you had any kind of feedback about being political and being out?

STEWART: It really was not very politically driven. It was just a very fascinating occurrence in history [Trump’s tweeting to her during the TWILIGHT mania], one that was definitely worth mentioning and highlighting, just because of the strangeness of it.  It was so surreal -- and still continues to be so bizarre when I think about it. The like ‘proclamation’ was really more of a punchline. I’ve been really open about, not necessarily my personal life, but what I stand for in terms of people being themselves and being okay with not hiding it for a really long time.  It was just those words were, you know, something that unfortunately get under certain people’s skin.  One of them being that guy.  And it was just a good punchline.

And also like live by example for sure but to say it in words is powerful.  And I’d never really done that because to be honest it’s too defined. I’m still -- I really live in the ambiguity of things and I don’t make promises because people change.  Certain blanket statements I find to be a little simplistic so I never wanted to do that.   But in this circumstance it was the best way to go: Bam!

Q: You are Maureen Cartwright in PERSONAL SHOPPER and I wondered is that a reference to Veronica Cartwright the child actor in THE BIRDS and who as an adult was in ALIEN?

STEWART: Oh wow I don’t know. I never thought of that. I could ask Olivier because Hitchcock was his man.

Q: You’re doing a movie about the Lizzie Borden case – what was the attraction there?  Is it a real horror movie?

STEWART: I’ve finished that. It’s someone’s interpretation of what could have happened that day and what could have led up to those events based on the very few facts we have surrounding that case.  It’s sort of a glimpse into what a young subversive woman’s life might be like in that time with a conservative and very domineering father.  So it’s that.

In “Shopper” her character Maureen Cartwright copes with “an existential crisis brought on by the death” of her twin brother, who as a medium was in touch with the spirit world.

“She’s a very fractured person. She misses him so much she’s kind of trying to be him,” Stewart, 26, said.

As a personal shopper, Maureen is trapped “with a job she doesn’t like very much because it gives her an opportunity so that she can stay in Paris and ask basically an unanswerable question: Are we really alone in this life?”

Maureen, heading for a full-blown nervous breakdown, was a tricky balance for Stewart.

“I never stepped out of her. The shoot was six-day weeks, 16- to 18-hour days. On Sundays I worked for Chanel, a photo shoot or flying to Rome for a show.

“The schedule was so condensed and insane because no one thought or talked about this stuff before we pulled the trigger and said ‘Go.’ So I had no opportunity — nor was it productive for me — to step out of it.

“But as an actor approaching something like this — I’ve had moments at night where your heart starts pounding a little harder and you can’t catch your breath because things don’t necessarily make sense.

“But you have to carry on living and connect with people. So I have these anxieties but I’ve been able to breeze through them. Where this person — it never goes away.

“One thing I definitely took from the movie: I was very thankful to be functional. Because I do know what it is to have little creeping thoughts that could take that functionality away. This girl is just the worst case scenario of that.”