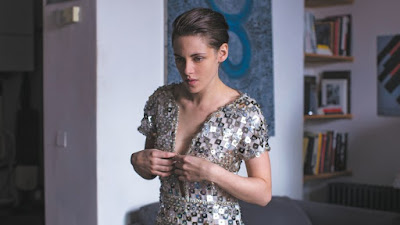 Ask anyone who the biggest star at last year's Cannes Film Festival was, and the resounding answer would no doubt be Kristen Stewart. From her opening-night appearance in Woody Allen’s Café Society to her multitude of winning red carpet looks (including a controversial Vans moment), she was everywhere. The biggest news for Stewart, though, was her starring role in Personal Shopper, the psychological thriller written and directed by Olivier Assayas that premiered at Cannes and is now showing in U.S. theaters. As you may have inferred from the title, Stewart plays Maureen, an American in Paris hired to tend to the fashion needs of a famous model (they’re the same size, so she can easily shop for her). But that’s not really why Maureen is there; she’s also a medium and is trying to communicate with her deceased twin brother. Contrasted against her day job of Chanel fittings and trips to Christian Louboutin is a series of supernatural phenomena, confusing “signs” from the ghost of her brother, and a stalker who harasses Maureen via text.

Personal Shopper is Stewart’s second film with Assayas; she was the first American actress to win a Cesar Award for her role in his 2014 film, Clouds of Sils Maria. To say the stakes were high for Personal Shopper is an understatement. Many critics praised the movie and said it was Stewart’s best performance to date; at a Cannes press conference, she also admitted it was one of her toughest roles yet. That was likely the case for Jürgen Doering, the film’s costume designer, who also worked with Stewart on Clouds of Sils Maria. In both films, Stewart assists a high-wattage celebrity, so the wardrobes alternate between casual, everyday clothes and glamorous red carpet fare. In Personal Shopper, Stewart wears an old Fair Isle sweater in one scene and a metallic Chanel gown in another; we spoke to Doering about the challenges of pulling both, and what it’s like to work with one of the industry’s most-sought-after actresses.

“Kristen is amazing,” Doering says right off the bat. “She’s very cool in the clothes. For me, it’s really easy to work with her, now that I know her [from Clouds of Sils Maria], and she trusts me. She’s so chic—you can take her anywhere, and she really wants to understand [the clothes.]” Doering also acknowledged that Stewart has been a face of Chanel for more than two years, so one might expect her to want some control over the clothing choices—but the opposite was true. “She always asks what I think, what I might propose, and then we have a real talk about it,” he says. “She’s not high maintenance at all—she’s very sexy. She has this big contract [with Chanel] and dresses for her job on the red carpet, but in the film, she looks like a student in sweaters and jeans.”

Stewart wears Chanel in the film, too—but it’s not her Chanel. After picking up a silvery sequin-encrusted dress for her boss, she briefly slips into it, as if to temporarily forget her haunted journey and assume a glamorous, unencumbered life. “It’s that game of dreaming of being who you work for,” Doering says. Much of his research focused on those clothes Maureen shopped for, as those scenes were pivotal moments in the film. “Olivier would say, ‘Why Chanel?’ or ‘Why Vionnet?’ because we didn’t want it to feel too obvious.”

When she isn’t playing dress-up, Maureen wears a modest wardrobe of jeans, polos, and leather jackets, which plays a subliminal role in the film’s dark mood. “She doesn’t like her job,” Doering says. (“I spend my days doing bullshit that doesn’t interest me,” Maureen says at one point. “It’s driving me fucking crazy.”) “I took that into account,” he adds. “She’s feeling bad, and she’s missing her brother, so [those clothes] create a big contrast between the designer dresses she tries on.”

Designing costumes that look like someone’s normal, everyday wardrobe may seem easier than working on, say, a period piece or far-flung drama. But it speaks to the impact that clothing has on a film, particularly how “real” a film feels—and that’s likely why Assayas hired Doering. The director is notoriously detail oriented, so every sneaker, coat, and bag probably had to go through a scrupulous approval process. “Everything had to feel credible,” Doering says. Stewart is familiar with offhand, believable style, too; don’t forget, she slashed a Chanel T-shirt for her first appearance at Cannes at Cannes.