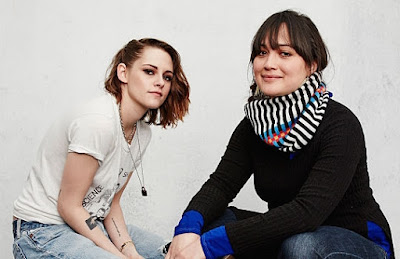 LG: I didn't see Kristen's current body of work until I started working with her. It was great to get to know her as an actress, in between takes. But she saves it all up—and I agree with her method—because she knows when you make the discovery during the scene that's when the camera should capture it. She's a remarkably generous actress in that she stays with you emotionally even when it isn't her coverage, when the camera isn't on her.

Reichardt adapted "Certain Women" from "Both Ways is the Only Way I Want It," a collection of stories by Helena native Maile Meloy. It's a triptych, with the first two sections devoted to characters played by Williams and Dern. All were shot in the Livingston area.

Stewart and Gladstone's piece closes the triptych. When she first saw the script, she kept paging through looking for the name of her character. Since she doesn't arrive until 50 pages in, Gladstone began to assume she was getting cast as a gas station attendant with five seconds of screen time.

When she did find her character, she realized it's the piece the film has been building toward.

She read Meloy's original story, "Travis B.," and decided to keep some of the original male character's traits. Chet is a rancher who rides broken horses despite having polio. She envisioned her rancher as someone who "won't be a fragile person because of an illness," someone with a limp and a wild streak.

She also hung onto a line in Meloy's story, that Chet "got afraid of himself that winter; he sensed something dangerous that would break free if he kept so much alone."

Reichardt changed Chet's gender, but Gladstone kept some shades of the attraction to Stewart's character, building off that line as a subtext - perhaps her character identifies more as a male but doesn't know it yet.

"I didn't want to answer any clear questions for my characters even," Gladstone said. She "shaped them into an amorphous, more abstract emotion but was trying not to let the thoughts be present too much."

Like their characters, Gladstone and Stewart got to know each other on the set.

She said Stewart is a student of film, and they passed time between takes talking movies.

"If I were to cast her into a Missoula archetype, she would be someone who would be going to every out-of-town DIY show at the VFW and the Palace. She'd be playing pool at the Union," she said.

Posted by Mods TeamKristenSite at 8:46 PM