Kristen's interview with The Playlist for 'Certain Women' 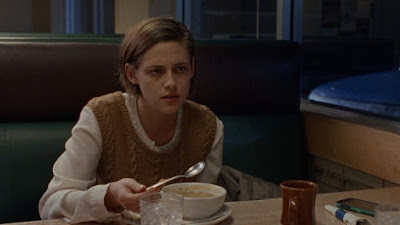 We had the chance to sit down with Stewart just ahead of the screening of “Certain Women” at the New York Film Festival. Unguarded and amped to discuss working with Reichardt, she shared insight on how the film gets at a truth of life that is never changing and the specificity of the director’s rebel storytelling.

Ben Kinglsey has described actors as hunters, searching for the necessity, the connection, the truth. Can you talk about the “hunt” on this film?
The biggest thing about this part was really just being — and not showing anything, not intentionally trying to make you feel anything. Kelly Reichardt creates such a full, whole environment. It was all really natural. I mean you’re always trying to find your way into a world so you can live inside of it. When you try to “display” stuff, it’s really not honest. Usually, it’s when you are not trying to display things that you accidentally reveal stuff. And you can only do that if you found your way naturally in to any environment. For this, I also just really wanted to put myself in a car. The work that I put into this film was primarily this long drive to Montana from LA.

What I really love about Kelly’s movies is that they focus on these moments that occur in-between the moments that we are used to highlighting in film. There’s nothing redundant and derivative about her movies. They’re all mediative. She commands that you stop thinking until it’s over. I get so absorbed by her work. Other people really like to package and deliver stories and make sure that you can consume them in this weird way that they want you to. Hers aren’t like that.

And it’s interesting that you bring up Kelly’s focus on the in-between moments of life and this want to place yourself in a car. Aside from your character literally driving for four hours each way to teach her class, each of the central characters in the film is shown in her car getting from place to place. And it’s not treated as transition. It’s treated as meat on the bone.
Totally. It’s trippy, right? All three women are up against something. They are each struggling, really grinding against something that is immovable. None of them are self-aggrandizing. Most “women’s stories” are like, “Oh, I have to overcome this case and it’s a big deal and it’s fucking moral and it’s the only right thing to do.” Honestly, it’s just too much. I think it is much more courageous to focus on small things that happen in life that aren’t necessarily what you’d make a movie about. That’s bold. These grinds that these women are on, sort of seemingly for naught, all wanting something they can not have, are hard to watch and really relatable.

Absolutely.
The other thing too, is also their not wanting to be part of an institution. There is the fight against the typical dynamic of a marriage. There’s the fight against the fact that women are not necessarily heard bureaucratically and that things don’t make sense and it’s illogical and fucking frustrating — and that you’re not going to change that. Then in Lily [Gladstone’s] character, she wants a friend and the attention of someone who has no idea that she even exists. And in my case, she wants to feel valid and that just isn’t going to happen. So, it’s these small, tiny little stories that I’m really blown away by how [Kelly] put them together.

And without a sense of urgency for resolution.
Yeah. Not at all. It’s a slow grind. It’s fucking exhausting.

It feels almost like if we were to squint off into the horizon, that the story of these women are stilling going on — beyond the frame.
Totally. They don’t resolve. Exactly. It’s not like the narrative is going to wrap itself up. That’s a truth of life that is not changing.

I think of what David Foster Wallace wrote concerning the next wave of rebel storytellers. That they’ll likely be the ones that “treat old, untrendy, human troubles and emotions in life with reverence and conviction.”
Absolutely. That occurs a lot in literature. It just doesn’t occur in entertainment. That’s always been some of the best aspects of good books. Yeah, I really love being part of the film industry. I don’t love being part of the entertainment industry. This film is entertainment by nature of the mode through which its presented. I mean for some people it will be entertainment — but, not for everyone. And that’s ok. It’s really meditative and authentic. Each of Kelly’s films are also unique to her. Her perspective is really visible in the work and they don’t feel like anyone else’s. It’s rare.

Did you have to adjust your process to the stillness of this world?
Yes. I realize that as I’m getting a little bit older, I’m having less reliance on nerves. [Using nerves] almost makes you feel better in a way because it feels like you’re working really hard, but in truth, it’s distracting, and it’s not what you really need. I used to come at everything like “argh!” — full force. On this especially, I had to really drop all of my — I’ve played a lot of characters that the best way to serve them was to really allow myself to be them and not necessarily change a whole lot.

But recently, there have been a few parts that I’ve played that really need their own particular set of idiosyncrasies and it would have been a disservice to have brought too much of myself to it. In this case, [the character] Beth is nothing like me. Like really nothing like me. She’s precious. And there is something really remote about her. I’m so not her and that was interesting. I had to get rid of all my stuff. I had to get rid of all my stuff that’s really identifiable at this point. It sounds kind of weird, but it’s true. The stillness was a really interesting thing. It really says a lot about Kelly. And, if I fucked up a line, she’d be like, “Oh, it’s actually this.” She’s very much in love with her lines.

I was actually wondering how much of it actually appears on the page.
All of it. Every fucking word. It’s shocking. The script is beautiful. If I ever started paraphrasing, she really wanted it the way the words were on the page.

She’s painting.
She’s painting, man. She’s very composed. She’d not the kind of filmmaker that goes, “Ok, we’re going to take it off six, we’re going to throw it on a shoulder and find it. Let’s just play around and dance.” Kelly’s like, “No. We’re going to compose a shot and then we are going to shoot a scene.” It’s cool. Especially because with most indie directors nowadays, it really is the Sundance look. It’s like, American independent film: throw it on someone’s shoulder and find it. She’s not that. She’s really composed, but somehow still makes it not look like that. It still feels so absolutely natural.