Lily Gladstone and Kelly Riechardt mention Kristen with The Knockturnal 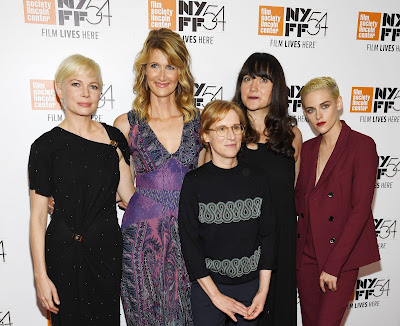 Congratulations on the film. You deliver such a powerful and nuanced performance. Can you speak a little bit about how you got involved and what attracted you to it?

Lily Gladstone: Yes, nobody says no to Kelly Reichardt when she comes knocking. I was in the rancher situation a little bit when I got asked to audition. I was house sitting for a ranch. I’m shoveling snow and chopping wood and stuff like that and then went into town and checked my email and had this audition notice. It came through a lot of circles that I already had established in casting, specifically, I’m an ethnically specific actor. It doesn’t play as much in the film, but it’s definitely in there and it got my foot in the door, but Native American casting director, Rene Haynes, she’s known for that and she knows me well and Mark Bennett called her, she called me and then Kelly has told me since then that … When I read the script I just didn’t think of it as an audition, I said, “I’m going to start preparing for this role,” because I didn’t know anybody else who could play it. I just loved it so much immediately. Picked my jaw up off the floor that I was even auditioning for this piece and went and got a Carhart jacket, got my flannels, which is in the final scene, my audition clothes are basically what I’m wearing. Especially, that pink flannel. That was what I got cast in and that’s what is in that last scene. Yes. Kelly said I was the first tape that she saw after being really nervous she wasn’t going to find who she needed for the role easily anyways and producers pulled me out of the pile and showed it to her first and that was it.

Most of your scenes are with Kristen Stewart. Can you speak about collaborating with her?

LG: Yes, Kristen’s wonderful. Working with her, she’s one of the most generous, present people so it comes though in the scene work. I do this too and she definitely does, but she loves the work and she loves digesting everything in a scene so much and she will just do it over and over again for the love of it. Even when it’s not her coverage, she’s so invested and so there and working with her was just like every other experience I’ve had working with people who are just so talented and just genuinely good people. It was fun.

The scene where your character drives four hours to talk to Kristen’s character is a heartbreaking scene to watch. Can you speak about playing that out?

LG: I got two takes. There were several times during filming where I was bringing a lot to a scene but Kelly would stop me and say, “You do get that moment but you don’t get it yet.” She’d pull me back from choices I would be making earlier in the time line. Then before we shot it she just said, “All right, this is it, this is where you let it go but don’t do it too much.” That’s the only direction we got. We got it in two takes, she used the first one. It was there. I mean, we’d shot everything right before it in the time line. It was there.

Can you speak about what attracted you to these three women?

Kelly Reichardt: Maile Meloy’s story is really what pulled me in. All the women are complex and they’re really set in their environments. A lot of the scenes took place outside and had small life processes, and those are things that I’m drawn to, and so those things were appealing.

I thought Laura Dern was so fun to watch. Can you speak about directing her?

KR: Yeah. Laura’s really fun to watch. She’s really a good comedic actress and then can take it to another place really quickly. She’s super super precise and you can tell she’s been on film sets all her life because she’s really aware of how the camera’s working and how the frame’s working and even how the cut’s going to work, I think. She’s a filmmaker, really, and so it was super exciting working with her.

I thought it was quite a stunning performance from Lily as well. Can you speak about discovering her a little bit? Obviously she’s been around, done some work before, but bringing her to this project.

KR: Yeah. She has been in other films, but she felt like a gift from the film gods. She sent us a tape and she had done the scene herself. It was just a huge relief. I found her around the same time I found the location, and the actual rancher of the location we used reminded me in some ways of Lily, and so it all kind of really worked together.

Lastly, Kristen, can you tell me how it was collaborating with her and what you admire about her?

KR: She’s so game. When I met her, she’s a leg shaking, fast talking, really wound up person, and then the camera turns on and she gets super mellow and slow, and she lays back and really responds to things. She’s a really good listener when she’s in a scene and she’s completely willing to let a scene be someone else’s. I thought she was an incredibly generous actor and really super nuanced. She blew me away sometimes.