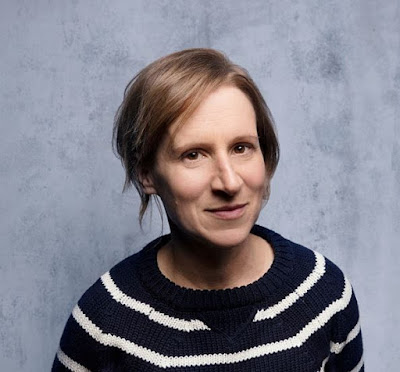 Vanity Fair: The way you sometimes abandon dialogue and just allow your camera to linger on performers’ faces for much longer than a lot of directors would—the way you trust in the power of that—reminds me of silent film.

Kelly Reichardt: There might be no words, but I take issue with the idea of silent film. Because there is a sound design. So it’s really about less dialogue, not less sound. I do think a lot about the moments between the words. Sometimes you do the scenes without the dialogue, just to see what’s there—what’s necessary—and then do the scenes with dialogue.

Tell me about shooting the scene where Laura Dern and Jared Harris are driving back from the consultation with the second lawyer, who also tells Harris’s character that he has no case. Most of the ostensible “action” in the scene is about Harris’s reactions—first his threats, then his breakdown. But I love the way the camera keeps returning to Dern’s face as she’s driving, then stays with her. You see her frustration with him, her empathy for him, and her fears and anxieties about her own problems, almost all at once.

It’s funny, because how I had imagined the scene would go [was very different]. That’s always the surprise in filmmaking: that you live with this idea of how something sounds in your head, and then real people come and do their thing and have their dynamic. I had imagined the dynamic in that scene kind of being the opposite of what it turned out being. It’s hard even to think about now, because I’m so used to the scene as it exists, but I had imagined Jared being more hostile and Laura being more annoyed at him. So it just took a different turn. The trick in the moment is to not be hung up on what you imagined and to be able to roll with what the new thing is, if it’s moving. Changing gears like that can be difficult. You plan everything and then there’s what’s going to happen—the movie you end up making.

I was also struck by the scene with Michelle Williams where she and her family are driving home after the sad, complicated scene with Rene Auberjonois’s character. They’re all in the car. The daughter has her earbuds in. Williams and James Le Gros, the husband, seem annoyed with each other. He’s driving and she’s looking out the window, with the Montana landscape going by, reflected in the glass. She sees something outside the car. We don’t know what it is. But she stares at it, almost looking at the camera itself. It’s an odd but powerful moment. To me, it reinforced her apartness but also her connection to something outside her family.

Michelle really just had an idea of this character, and she was so brave in not being at all concerned about the likability of the character, which I really appreciated. And again there’s really a dynamic that occurs [among the actors]. And the way the rig was set up, Michelle really was trapped in the car. She could not just step out for a second. I think that that helped play with her feeling trapped. It’s funny how the production can play into the feeling of what’s happening in a scene. Michelle also knew she could just sort of take her time with the shot. We got on a long stretch of road, so the scene could play itself out. There was time for her to take in what had just happened with Albert [Auberjonois’s character]. There’s the moment where she and James are on each other’s side as husband and wife, when they’re sort of angling for what they want from Albert, and then there’s the division of the family—how you can be trapped in a car, each in your own space.

That moment where she looks off—was that scripted, or something you directed in the moment?

That was just Michelle. The actors just know what the situation is, and they know what the dialogue is, and it’s theirs to just play out. It’s something that’s unfolding for everyone. It’s not like it’s some exact science. And then you get in the editing room, and there are more ways to go. I’m still fascinated by how time plays. Like how much a moment of performance can change depending on how much time is on either side of a response or reaction, if it has time to go down and go away. Just the building of tension like that. That’s true of every shot. That’s what’s fascinating about editing.

That leads me to the scene with Lily Gladstone, where you stay on that medium shot of her driving in her truck for two and a half minutes—I timed it!—following the scene in the parking lot where Kristen Stewart’s character has kind of blown her off. And her face as she drives, the way we see her both feeling and repressing her pain, and it just keeps going . . .

That shot went on even longer than that! I was on the floor of the cab, yelling at Lily not to cry. “Don’t cry! Don’t cry!” We were not on a car rig. She was driving this truck that stalled out all the time, and she had to do things to keep it running.

Was that by design? Some kind of method trick you played on her?

No, it was just an old, shitty truck. But it worked in the same way that having animals in a film does. Like Lily feeding the horses in this film. Or the dog in Wendy and Lucy, or the oxen in Meek’s Cutoff. I think the mechanics of animals and cars really does force actors to respond to what’s around them. It makes acting go away. In this scene Lily was driving through real traffic. There were red lights, she had to make turns, and this heavy thing had just happened [to her character]. And for Lily [in real life] the movie was a big deal, and doing the final scene with Kristen was a big deal to her. She was going to go home the next day to Missoula, and the experience was going to be over for her. I mean, Lily is Lily. I have no responsibility over the magic of Lily.

You put a camera a foot away from her face and she doesn’t even seem to notice it. She’s just so game. She loved the whole thing. She was in a great mood every day. It would be negative-six degrees, we’d be crying, and she’d be, “What do we do now?”

The scene between her and Kristen Stewart in the parking lot is another great example of a lot going on between two actors with only minimal dialogue. Kristen’s character doesn’t mean to be mean, I don’t think, but the way she’s befuddled by Lily’s character, the way she can’t seem to help brushing her off, is devastating—both for the audience and for Lily’s character.

It turns out that Livingston [the town in Montana where much of the film was shot] is the windiest city in America. When we did that scene in the parking lot, it was insanely windy. Kristen could not keep her dress from blowing up over her head. And I knew it was going to be hard for sound. But wind is great! I said, “Let’s go for it. We can make the sound work, and the wind will add something to the scene.” They started doing the scene, and Kristen just turned to me, and said, “Lily is really good today.” And I think they each took each other to [a different level]. Kristen, in life, her leg shakes. She’s a fast talker. To see how a scene starts and her metabolism suddenly seems different—I don’t know how you perform that. The question [in pre-production] was always, “Is Kristen too big for this role? And will that be distracting?” And I was blown away by her. I just thought she was so generous to Lily [in that scene]. She had no problem being the quiet receiver of something, and making herself smaller in a way. She gives really a lot in that moment in the smallest away. She’s so still. You’d worry whether someone has that in them, especially someone who’s been in a lot of big productions. That scene, while we were shooting it, I was like, this is beautiful. Even with all the craziness of the wind. We were blocking them on every side—nothing could even stand up, it was so windy. But everybody felt [that moment]. I looked at the sound guy. He was like, Whoa. It was just very beautiful while it was happening.

Posted by Mods TeamKristenSite at 2:18 PM