Kristen's interview with the Daily Telegraph for 'Cafe Society' (Australia) 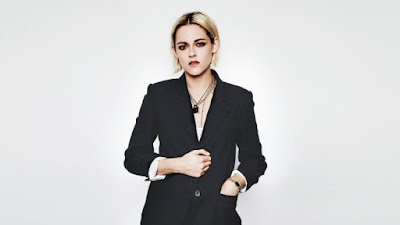 AFTER finding fame in the 2008 teen smash hit Twilight, you have moved on to some very adult roles. Was that deliberate?

I was psychically drawn to the projects. That’s when it feels the best: when there’s something gut-wrenching that needs to be explored. I’ve wanted to make movies since I was nine years old and you just know when there’s a through-line. You recognise that in other people and if you find the right story to tell, that’s what I’m drawn to.

Is there any common denominator between your roles?

Er… yeah, me! I’m really not a character actor. I know a lot of actors say they can hide behind characters and they can really step outside of themselves. I feel when I’m doing really stimulating, soul-fulfilling work is when I’m finding myself and not hiding. So I would say that there is probably a through-line… but I don’t usually step outside and analyse my career as a whole.

Café Society is your third film with actor Jesse Eisenberg, who has said in the past he was intimidated by you. Did you feel that?

Jesse is so smart. He used to intimidate me. But now there’s a warmth we share that allows me to keep up with him. It used to be debilitating. I used to be like, “I’m not going to try to be on your level,” and now we can really run together. But I don’t know… honestly, life really overwhelms him because of his intelligence. Situations are really over-stimulating for him. I think he’s one of those special minds. I have a nature that is really in stark contrast to his, so I think it trips him out.

Eisenberg also says you don’t care what others think of you. Is that true?

No! I deeply care what people think. I’m an actor: all I care about is being understood. All I want to do is convey myself. When I feel like I haven’t, it drives me crazy. If I feel like I haven’t done a good job – or if I’ve projected a weird, tainted version of myself because I feel insecure – I walk away from those situations being really regretful. So as I’ve gotten older I think, “You’re not going to be happy unless you breathe through this and stay completely yourself.” At the end of the day, you can own that; but what you don’t want to own is saying things you don’t mean and trying to be something you’re not.

What made you want to play Vonnie in Café Society?

I love Vonnie because she also functions from an incredibly pure, sort of shameless place. Especially within that era [the film is set in the 1930s], Vonnie does things that are unconventional. There is something so present about her and something genuinely happy. She really enjoys life and that is contagious as hell.

You worked with writer and director Woody Allen on this film. What is your favourite movie of his?

Annie Hall. I know it’s obvious, but it is my favourite. The first time I saw Annie Hall, it was on an airplane, which is really messed up. It was Air France, and they have good movies on there. I said, “Wow, I’ve never seen that.” And my publicist – who is one of my best friends, I’ve known her for years and years – said, “Watch it now!”

So what’s next – a blockbusting superhero movie?

I didn’t really grow up on comic books but I love big movies, I like the effect of them. I like sharing things on that level.

Do you enjoy the glamorous side of the industry, such as having a stylist and walking the red carpet?

Nobody can style themselves because we have jobs to do. We’re working on other things. I have a really open and involved collaboration with my stylist. I’m not remotely dressed by someone. But she’s known me for so many years. I’ve been working with her since I was 13, so she can highlight who I am, rather than make me something else.

So you’ve never stepped out wearing something you don’t like?

I feel like I dress myself, but there’s no way I could do that alone, because I don’t have time to scour the world for the pieces. There’s a lot of material and clothes out there. Also, I’m into it. I fall into the category of someone who is genuinely attracted to fashion because it is the shiny thing… I’m like a moth to a flame. And that’s purely animalistic. It’s not attention-seeking. I find it pretty.

Do you have a massive wardrobe at home?

I have a lot of sneakers! I’m really sneaker-obsessed. But, no, not really. All this stuff we wear is being lent to us. I try to keep little pieces that feel like mine, but I don’t have that much stuff.

Posted by Mods TeamKristenSite at 2:58 PM