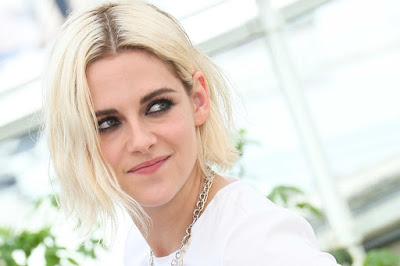 Kristen Stewart declared independence about four years ago, just after the last Twilight film ended her obligations to the franchise.

For her, this is what freedom first looked like – tiny movies such as Peter Sattler’s Camp X-Ray, where she played a female soldier at Guantanamo; Kelly Reichardt’s Certain Women, a Sundance stunner co-starring Michelle Williams, playing the daughter of Julianne Moore’s dementia patient in Still Alice.

Now, she’s enjoying her independence day – disentangled from Twilight and The Huntsman and the attendant dreary carousel of headlines, re-invented as an actress who works with iconic auteurs including Woody Allen, Olivier Assayas, Ang Lee.

She seems surprised she pulled it off too. “It’s insanely cool,” she says. “It’s amazing, the kinds of people that the universe has brought me to. I am working with the people that I idolised growing up.”

Above all though, this year’s collaboration with Woody Allen in Café Society, his take on the Golden Age of Hollywood, has made Stewart stand out – the film opened this year’s Cannes Film Festival and one thing critics were agreed upon, was that the actress herself was ‘luminous.’ Her profile was further raised this year by another star turn, this time in Olivier Assayas’s Personal Shopper. The film utterly divided reviewers at Cannes, but the UK’s Guardian newspaper glowingly described it as “a bat squeak of craziness.”

“At its core, it’s a ghost story about someone contemplating the larger questions of life, such as are we really alone?” says Kristen of Personal Shopper.

Ghostbusters it’s not, however. Her character Maureen, as well as being a medium convinced her dead twin has something to say to her, spends her non-haunted hours playing lackey for an ultra-rich supermodel. Maureen passes the time borrowing her clothes; Balenciaga, Chanel; all the kinds of outfits that Kristen Stewart herself wears on the red carpets. It’s a smirk to the industry from Assayas, with the actress fully in on his joke.

“I revel in winking at what is glaringly obvious to us at least, the surface nature of what we – and me sometimes – are guiltily obsessed with, “ she grins. “ I mean by that, these distractions that genuinely don’t matter, those shiny things that we obsess over. It’s fun for me to nod at the absurdity of it because I’m so involved in it.

“With anyone else I think it would still be tough and interesting but it’s perfectly and gratifyingly ironic out of my mouth.”

This LA native likes getting dressed up, particularly by Karl Lagerfeld, but still says she mocks herself for it: “If I were to show my twelve year old self the things I do … as much as I love the fashion aspects of my job, I would be shocked at twelve to know this. I’m not the most obvious choice for it.”

Between the Twilight series and her first forays into what a post Bella Swan job would look like – Walter Salles’s On The Road, playing Joan Jett in The Runaways – she constantly seemed to be paired with the adjective ‘surly.’ This was unfair; Twilight and especially The Huntsman brought the kind of throw-her-under-the-bus scrutiny that would have made many young women give up. After this torrid time, reviews don’t seem to bother the actress; Clouds of Sils Maria, her first collaboration with Assayas, sparked similarly mixed reaction.

“I feel if you function from a very honest place, there’s never going to be a time when you are going to regret whatever choices you make,” she says. “You never regret a creative venture, because the experience was worth it, even if you don’t make a perfect movie. There’s never a time when I am wondering whether it’s a good idea for me to do a film, it feels compulsive.”

So what would it take to get her back onto the set of a blockbuster? A bloody good script?

“It would indeed have to be a bloody good script,” she admits, smiling slightly. “But if that was the case, I would be very excited, as there’s nothing quite like reaching that many people. We make films just to get closer to each other anyway – don’t we? – and any way we could share on a grand scale would be incredible. It’s a little bit rare to find it in the blockbuster context, because believe me when a big movie hits, it’s so incredibly satisfying.

“I just did a film with Ang Lee, Billy Lynn’s Long Halftime Walk, it’s not what I’d describe as a blockbuster, it’s definitely not a franchise, but it’s certainly commercial. And it was really enormous in scale. It was really interesting to step onto a movie like that again – I was saying, ‘wow, you really have the big guns, you have more than one camera on set and more than thirty people here!’ It’s a whole different experience.”

Lee’s film should be her next release; it asks hard questions of America’s perception of its military, and how ugly truth can be packaged into something far more palatable for the public. A film that poses questions, without providing the answers, is what Kristen Stewart loves, “because it allows you to own a thought process that is not cultivated or owned by a director. I love unconstructed meditations.”

It’s always interesting to ask a Californian for a spiritual perspective, especially as Personal Shopper is as near as she’s come to a thriller since her childhood film with Jodie Foster, Panic Room. Is there really only the flimsy veil between the living and the dead that Maureen seems to think exists?

“Whatever your eyes are perceiving to be reality is a very personal experience and whether or not that is the same for everyone, or if it’s some sort of fabrication or illusion and we’re all living in the Matrix, I think there is a reason why we’re asking these questions, “she replies.

“But to answer whether I believe in an afterlife or ghosts or anything like that- I have no idea but I know there’s something there that we can’t see and it drives us.”

Whatever is driving Kristen Stewart towards fulfilment; it’s working.


Note: The quotes from this interview sound familiar from other recent interviews but we are posting it here.