Kristen and Nicholas Hoult's interview with THR for 'Equals' 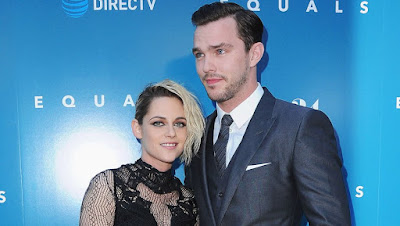 "You feel like you’re being ripped in half and it hurts in the best way," says Stewart, who stars opposite Hoult in Drake Doremus' sci-fi romance, of falling in love.

Kristen Stewart and Nicholas Hoult sweep into the room at the London Hotel, both proclaiming "It's really dark in here!" at almost the exact same time. They rush over to different switches in an attempt to bring in some light to the swanky London Hotel room on the July 8 afternoon.

Unfortunately, they can't figure it out. The room, while nice, isn't like the setting of their latest film, Drake Doremus' Equals, set in a futuristic society where emotions don't exist but technology has made life very minimalist and streamlined (the film was shot primarily in Japan and Singapore).

Still, even in the dark hotel room where the interview takes place, it's clear that the duo, who play two young people who find themselves with a "disease" that allows them to regain their emotions and fall in love, have developed a strong friendship, easily laughing at each other and referencing inside jokes from set. It makes sense that they've grown so close. Doremus put them both through a rehearsal bonding process that involved exercises like staring at each other and just saying hello over and over, and looking into each other's eyes for a long time while only being allowed to tell the truth or a lie. They also spent time sharing their thoughts with each other an a variety of subjects like love and relationships.

Plus, as Stewart and Hoult tell THR, they went skateboarding at 4 a.m., late-night drinking in a bar and go-kart racing on their days off. Ahead of the release of Equals on July 15 via A24, the stars spoke to THR about their adventures, shooting in Asia and what it feels like to fall in love.

Tell me about the very first time you met.

Hoult: It was here in LA. It was Kristen’s birthday. I just went along with a friend and I bought a her a shot of tequila to say "Happy Birthday." This was years before we were put in this movie. She doesn’t remember it.

Stewart: [Laughs.] I don't remember this at all.

So did you remember this when you re-met for the film?

Stewart: No, I just found out today actually when we were doing interviews [Laughs.]

So when did you meet for the first time for the movie?

Hoult: It was at Drake’s house. We all just sat and talked about the script. That was the first time I was like, "Damn, this girl’s so clever. She’s got great ideas." But I was also very hungry because I hadn’t eaten. There's was this cheese board, and I ate all the cheese.

Stewart: It was subtle taking him the cheese too. It was like when a nice lull would happen, which was rare, he’d take a piece. [Laughs.] Drake kind of developed this [project] with Nick in mind. And I was cast more traditionally. So, I came in so ready to prove that I should have the job.

Hoult: But I don’t think either of us would have done it without the other because Drake needed people that matched and worked.

Other than the exercises Drake had you do, was zip-lining and go-kart racing also part of the bonding experience.

Hoult: Oh no, that was just for fun.

Stewart: It was all-inclusive, though. It was really like all-encompassing, the experience. Every one‑too‑many drinks we had it was like we were better the next day because of that. Drake was so encouraging of anything that was even kind of scary. He likes to pretend that he was scared that we were skateboarding, but he loves the fact that we would go off at 4 a.m. and barrel down a hill rather than go to bed or learn our lines. Just to know that because we had fun the night before that the work would be better the day after is such a cool way of working.

Is there anything from the cultures in Singapore or Japan you wish was over here?

Hoult: There’s much more respect in Japan in terms of...

Stewart: --for each other.

Hoult: For each other and the elders particularly as well. It’s a very different system.

Stewart: Anciently speaking, they are obsessed with balance. You can feel that. Literally, in the food it’s so balanced. There’s a harmony that I don’t feel so palpably in other places. Because we're in this weird position of being known publicly, people reveal the worst and best sides of themselves fast than us, so being there was like lovely because everyone was quite lovely. There's a social dynamic over there that's nicer because it's balanced.

How do you describe falling in love for the first time?

Stewart: The first noticeable thing to me is how physical it is. But I’ve had it a couple times, so it’s not just the first time, which is actually encouraging. We were trying to describe this feeling in rehearsal. It’s just you feel like you’re being ripped in half and it hurts in the best way. And it’s like this dropping pole that also floats and it burns and it’s cold. It’s like just all every contradictory feeling at once imploding. You know what I mean?

Hoult: I agree, but I also I think before that I sense like a stillness. It’s not the moment of clarity, but, you know, it's like a ...pause.

Do you think about what happens to your characters after a movie ends?

Stewart: It kind of dependent on the project, but in this case for sure. The movie is not just about falling in love for the first time and coming into your own as an emotional being because people always have that in different stages of their lives. It’s like some people are in tune with themselves at five and some people don’t wakeup till they’re like f---ing 50. It's that within a relationship that starts off really hot and strong and real and visceral. That love exists for a reason. And to be aware that it’s going sort of drop sometimes and that there’s a reason that it exists in the first place. And you can actually take part in sustaining it.The ebb and flow of sustaining love and whether or not it exists forever.

Source
Posted by Mods TeamKristenSite at 6:25 AM