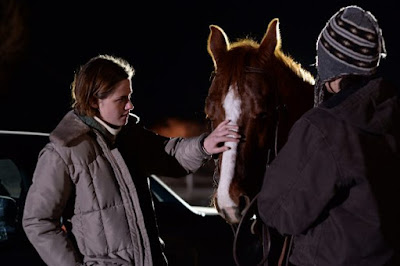 Do you feel like that’s something your character shares with Kristen?

I think so. I feel like Kristen’s character is driven by her schedule and her circumstance. And also, what seems like being the only female lawyer at her new law firm – from the way she’s being treated, like the new kid. In the original story that’s very much pointed to, that’s she’s the new girl in an office full of guys and is kind of misplaced by that.

I think how tired she is and how brushed aside she feels and the way she conveys it to the rancher. The rancher has nothing but compassion for that. She can’t really express it that much, but she gets it – not to fit along in a group and to be working so hard constantly.

Can you describe the relationship you had with Kristen on and off set?

Kristen’s really an open person and so am I. We kind of just got to the heart of getting to know each other over shared experiences. We talked about music and art. We just hung out and got to know each other as people, but we really didn’t have that much time together. When she left set, we were both so stoked that we had gotten to work together. She said it first, she was like, “It’s so cool to work with you.” The feeling was totally mutual. As a person, we had a really good time. She’s really chill and we had a lot of time to talk about and understand different things.

On screen, because the rancher spends so much time alone, Beth and every tiny little gesture she makes is just so new and so intriguing. It’s hard to see someone clearly or hear what they’re saying, but that’s one thing about the rancher, she doesn’t seem to hang on to so much. Bringing the horse is kind of a big thing. Ha!

For me, what I was finding, it changes when you’re watching it as the actor because we had different takes and interpretations on set, and then you see what Kelly edits together. But what it reminded me of was a lot of the relationships that I see in my own family, where one person is working really hard at a desk job that’s soul tiring and the other one is doing physical labor that’s exhausting but you’re not dealing with micro aggression from your employers. The way that a relationship or a friendship or a support system goes from that dynamic – it’s something I thought the rancher would be familiar with.

My mother is a teacher and works in early childhood development, but also with multi-cultural curriculum, which is sometimes difficult for her because some students don’t think it’s that important. She’s got the tiring and intellectual job and my dad has always worked in the shipyards. He’s so strong and funny and accepting of everything she vents about at the end of the day.

For me, I’ve never seen that solely as a male/female thing. It’s a pretty typical balance that works. I think there’s something about the rancher who just likes to sit and listen to somebody. It makes her feel valuable. I think there’s absolute admiration for Beth beyond the physical attraction that emerges – an intrigue that she has with this person. She feels valuable being able to show her where to eat and that she doesn’t have to worry about anything. I think that’s what drove the horse, she thought she needed to connect with something present. It was a sharing of herself too.

Read Lily's full interview about 'Certain Women' and more at the source.

Posted by Mods TeamKristenSite at 4:17 PM