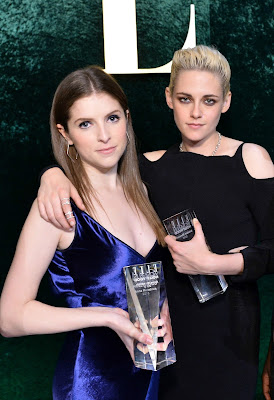 Actress Anna Kendrick is mostly known for “Pitch Perfect” and “Up in the Air” and having a really funny Twitter account — so it’s likely that you even forgot she was in “Twilight,” the hugely popular vampire franchise that took over the world in 2008.

“For those of you thinking, Wait, she was in ‘Twilight’?, I sure was!” Kendrick, 31, writes in her new memoir, “Scrappy Little Nobody,” which was released Tuesday. “I was the sassy, awkward friend who broke up the relentless succession of intense stare-downs with musings on boys, tanning, and various school gossip. It was a sweet gig.”

As the role of Jessica Stanley, a friend of the lead character, Bella Swan (Kristen Stewart), Kendrick’s relatively minor role meant she got to collect a “Twilight” paycheck but only spend a few weeks on set. As she puts it, “The best part was that I got all the fun with none of the consequences,” such as the “creepy super-fame” that the movie’s stars like Stewart, Robert Pattinson, Kellan Lutz and Taylor Lautner endured.

However, it’s probably good that Kendrick was only around for part of the time — as she describes it, the filming experience sounds rather miserable. She explains that they filmed in freezing weather in Oregon and Canada, where the setting was beautiful but extremely uncomfortable. It didn’t really help the mood on set. When she arrived a few weeks into filming, thrilled to join, she didn’t get the most enthusiastic response from the cast.

“Kellan Lutz is the sweetest guy, but that day I think he might have strangled me if he’d had the energy,” Kendrick writes. “Kristen Stewart — one of the most committed actors I’ve ever worked with — made a valiant effort to be friendly, but I could tell she was putting her back into it. Underneath every word, I heard You don’t know, man, you don’t know what it’s like out there.”

Yeah, it doesn’t sound fun. “Wet and cold is not an environment conducive to making friends,” she added. “Imagine if the first four weeks of a new job were spent outdoors in the freezing rain.”

By the fourth movie, Kendrick writes, she had earned enough clout to land a coat that she could wear when she wasn’t filming; unlike the heroic extras, who for whatever reason weren’t wearing coats between takes and were only given space heaters. It doesn’t sound like an experience she’s likely to replicate, even if the movie is another franchise that could rake in a gazillion dollars.

“If you told me I had to be in that weather with no relief, I would have bailed like the little b—- I am. Extreme cold messes with you,” Kendrick writes. “The elements don’t discriminate. And no amount of ‘you’re getting paid to do this’ matters when your body’s basic survival requirements are in play.”