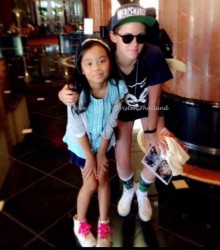 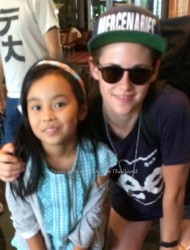 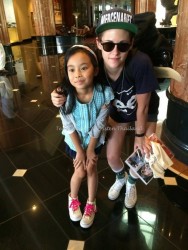 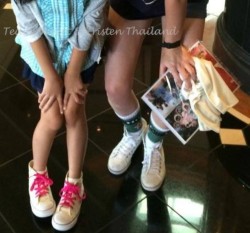 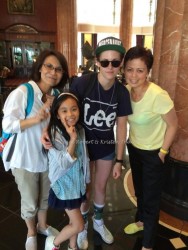 My friends & I are staying the same hotel as EQUALS 's cast & crew in Tokyo , at 6:30 am on Tuesday (Aug12,th) while we were at the hotel breakfast lounge, we ran in to Kristen (in baggy jeans , white Tshirt , sneakers and Mercenaries baseball cap) with Scott & her Japanese bodyguard , I slipped 'Kristen' a bit lound and she heard that so she gave us a cutie smile & waves then rushed to the waiting car , left the hotel for the set.

So on the next morning (Aug 13th,) we planned to see Kristen again , I prepared some souvenirs which I brought along from Bangkok with me & waiting at the hotel breakfast lounge , while we were having breakfast we saw Director Drake Doremus & some crews at the concierge counter with a lot of luggages looked like they were checking out.

Later Guy Pearce showed up in shorts , gray Tshirt & sandals joined the group for few minuets then go back to upstairs. About 10-15 minutes later Nicholas Hoult made his appearance in a very casual outfit , cargo shorts , long sleeves Tshirt (the same one he wore when he went to Ninja Warriors with Kristen last week.) He entered the breakfast lounge and took a seat just behind our table, talked & laughed with crews.

Just few minutes later we saw Scott stepped out from the elevator was followed by Kristen !!

Kristen's out fit is ridiculously CUTE especially her SOCKS and she has a white skateboard in her backpack !!!

She was mingling with some crews at the lobby near the front door, looked fresh from shower & no make up on , my friend , little Namika her daughter and I picked up a gifts and rushed to see her.

I first called her name , she turned to see me with a small cutie smile. I greeted Kristen a good morning and she "Good morning" back to me, I instructed Namika to present her prepared gifts for Kristen. Kristen took a gifts from Namika's hands with a soft smile on her face then asked 'What is this?' with a very gentle voice which you can clearly see how sweet she is. Namika said 'a gift for you.' Kristen chuckled "Oh let me see what is it." she took a 'Red Bull' Tshirt & some pictures out from the bag. There's a pic of Kristen's Birthday card which Namika made for her back on April 9th,. Kristen gave Namika a big smile 'Wow this is good , thank you."

Namika shyly asked Kristen for a picture Kristen waved to Namika with the most adorable tomboy gesture I have ever seen & said 'Yes, come here , come here.' gave Namika a signal to standing next to her and we took few photos together.

I gave her 2 Thai cooking books and some stuffs , she flipping pages of the book then said 'Oh good it's cool!"

Next one of crews came to Kristen told her its a time to leave , Kristen told us 'I have to get on the train' the we waved for goodbye. She got in a same taxi with Scott & Japanese bodyguard left the hotel for the train station.

We have learned later that all cast & crew are moving to Shizuoka , a city in the south of Tokyo and will be back in town later before the end of this month.


Thanks to @RobStenThailand Via
Posted by Mods TeamKristenSite at 1:41 PM