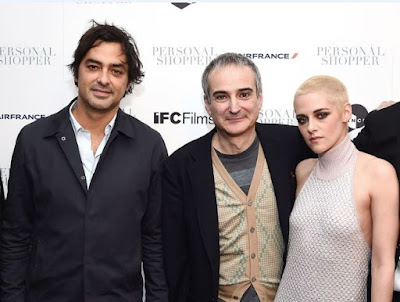 When the French writer-director Olivier Assayas first cast Kristen Stewart in a movie he had only seen a couple of the Twilight movies. Every accolade that has followed that inspired decision – including Stewart’s best supporting actress prize for her role in Clouds of Sils Maria at the 2015 Césars, as the first American actress to win at France’s most prominent film awards – is a pleasant surprise for Assayas.

“I think the collaboration with Kristen has been extremely inspiring for me,” says the 62-year-old art-house director. “I think it’s the way we function together. Kristen inspires me to go in different directions and function in slightly different ways; I suppose I also give her space she doesn’t really have in her other movies.”

The excitement from that 2014 film was enough to convince both to swiftly reunite for Personal Shopper, which premiered at the 2016 Cannes Film Festival, where Assayas shared the best director prize with Cristian Mungiu. “You never really write a movie for an actress – but I certainly had Kristen in mind for this one,” he says.

“This film started pretty much with the idea of this character of a girl who is torn between the very mundane job she does in the fashion industry, and her inner life – she has bigger hopes, dreams and longings. I wanted to make a movie [set in] a world that is increasingly materialistic, where individuals can be easily crushed. A way to protect oneself is sometimes to be more on the spiritual side. There is some healing, some protection somehow, in accepting that we have a complex inner life.”

In Personal Shopper, a the grief-tinted supernatural drama, Stewart plays a fashion shopper who also happens to be a medium waiting for a signal from her recently deceased twin brother. An American in Paris, her character, Maureen, would go through a series of genre-based situations that, in the hands of Assayas, turn out to be consistently refreshing.

With apologies to the Twilight set, Clouds of Sils Maria and Personal Shopper are now commonly regarded by film critics as the films which made the mega-popular Stewart a bona fide movie star. The irony that she plays a celebrity assistant in both films is not lost on Assayas.

“It’s a way to present Kristen stripped of that layer of celebrity and to allow the viewer to see her as she is, as a person, and somehow to be closer to her,” he says.

Incidentally, that list could also include Mia Hansen-Løve, Assayas’ wife since 2009. Although she has appeared in small parts in Late August, Early September and 2000’s Sentimental Destinies, Hansen-Løve has rapidly become one of France’s best directing talents with her first five features, including the engrossing middle-age drama Things to Come (2016).

“When we first got together, she was not a director, and she hardly was an actress,” says Assayas with a big chuckle. “I’ve seen her evolve from a would-be filmmaker to a filmmaker to a great filmmaker. It’s been a fascinating process. … It’s a surprise how fast it has happened.”

The sudden rise of Hansen-Løve is mirrored in the acclaim that Assayas and Stewart have received for their collaborations: the two are already talked of as one of the most interesting auteur-muse pairings working today. “I’ve been very privileged in the sense of working with great actresses,” says the director.

“Usually, after two movies, we ended up becoming friends; we don’t necessarily have to work again because we’ve already covered a lot of ground. With Kristen it’s a bit different: we’re not exactly friends. We very dearly love each other, but it’s not like we hang out together. We’re from very different generations, and we live in two cities that are very far apart. But something happened when we’re together on the set. So now, I really do want to make another movie with Kristen.”

While his next project with the actress remains an idea that’s still “too abstract right now”, Assayas is having a hard enough time picking between two projects for his next directing gig: one is a “very French”, as-yet-untitled film for which he’s about to finish writing and hopes to shoot in the autumn; the other is Idol’s Eye, a true-crime thriller set in 1970s Chicago that, while slated to star Robert Pattinson and Rachel Weisz, was abruptly called off in 2014 after the production lost its financing.
“Now it’s kind of happening again,” Assayas says of the project, which has reportedly replaced Robert De Niro with Sylvester Stallone for the leading role of mobster Tony Accardo. “But I’m keeping my fingers crossed because this movie has fallen apart once already.”

For the full interview, please go to the source.

Posted by Mods TeamKristenSite at 10:11 PM