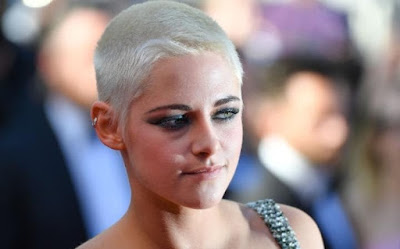 Few directors’ first short films entail work by an Oscar-winning visual effects company, music by St Vincent, and a three-person stunt team. But few directors are Kristen Stewart. Only one is, in fact, and she has brought her 17-minute debut to Cannes this year: an abstract piece called Come Swim, in which a man (Josh Kaye) who remains nameless in the film itself, but is identified as Josh in the closing credits, wrestles with an unquenchable thirst – sometimes within a dream, and perhaps sometimes not.

It’s an earnest, sombre, often unsubtle work – but it’s also disciplined, sharply coherent, and cine-literate in an old-fashioned surrealist way. And its commitment to its own weirdness itself feels bold, given its director’s profile as a young actress (who got her break in a vampire romance franchise, no less!) who’s dared to stray to the far side of the camera. In other words, it would be an easy film to mock.

Easy, but wrong. Come Swim is significantly better than some of the ill-advised actor-directed projects the festival has programmed recently – perhaps, you sometimes wonder, as a prank (step forward Ryan Gosling and Sean Penn). Cannes has spent the last five years nurturing Stewart as a world cinema star to be reckoned with, and that plan came off: in 2015, she became the first American to win a César from the French Académie. So if they now also want to give her a platform as a filmmaker, more power to them, and her.

Come Swim opens with a silky-slow shot of a rolling, charcoal-coloured wave, before cutting to sea-froth washing quickly across the screen, an image heavily reminiscent of that old avant-garde staple, the melting film strip exposed for too long to the projector’s heat and light.

Then comes Josh: first suspended undersea, then is in bed, blearily reaching for a glass of water, which he spills, jolting the film into another room, where he laps the stuff straight from the tap. Josh is beset by a disembodied, critical (and female) voice, which sounds variously like his conscience, his nagging super-ego, his ex-lover, perhaps even some kind of victim of his. The voice overlaps with his own, and the words both speak are by turns critical and intimate, though ambiguously so: “I’m getting water in my mouth,” “It just feels stupid,” “This is my body, eat it,” and most enticingly: “A lie is never a lie, just a code you can’t crack.”

Meanwhile, Josh finds himself in various scenarios, always drinking, often in cars, sometimes moulting and desiccated, until relief, in the form of bodily submersion, finally arrives. Some shots involve a digital overpainting technique which achieves an effect not unlike painting or scratching on celluloid which a smaller production could have achieved for a fraction of a percentage point of the price. But as I say, this is no ordinary first film.

Cynics may scoff that anyone with Stewart’s budget and calibre of crew could have made a good film. But even just a second’s reflection throws up countless examples where they didn’t. (Again, hello Gosling and Penn.) The truth is, she has something – and when there's something more, Cannes will no doubt make room.

There is always something enthralling about a long-time actor’s decision to step behind the camera. Is it a bid to prove something? Do they really have an artistic vision, or are they existentially struggling with the fact that they are a mere puppet rather than a full-bore creator? The results of these directorial dalliances have resulted in some astounding films. For every Warren Beatty (Reds) or Ron Howard (A Beautiful Mind) though, there’s a Sean Penn (The Last Face) or Ryan Gosling (Lost River).

The latest screen icon to jump behind the camera is none other than Kristen Stewart, star of Certain Women, Personal Shopper and the Twilight saga. Instead of launching directly into making a full length feature, Stewart has opted to turn her hand to short-form filmmaking with Come Swim. The film details a man’s struggle with loss; perhaps the departure of a lover, though it may just as likely be this lover’s death. With his significant other absent, a man (Josh Kaye) is left simultaneously drowning and dying of thirst. The identity of this lover remains unclear until the film’s finale, yet most will recognise the woman’s voice as belonging to Stewart herself.

Like many actor-turned-directors before her, Stewart wears her influences on her sleeve. To express the interior crisis of her protagonist, she invokes the surrealism of David Lynch along with the body horror of David Cronenberg. The film’s aquatic metaphors remain appropriately ambiguous in the first segment, in which Stewart’s storytelling is purely impressionistic. Yet as the story progresses it begins to hint at a big reveal, one that dampens the enthralling mystery set up at the outset.

While Come Swim begins as an exercise in surrealism, it eventually exposes its transparency in what seems like an attempt to concede to the expectations of a more generalised audience. The vivid depictions of thirst and drowning are replaced by matter-of-fact storytelling, with Stewart’s own voiceover becoming less cryptic and more of a guiding light.

These script contrivances aside, Come Swim is a beautiful looking piece of work. With the help of cinematographer John Guleserian, Stewart has crafted a rapturous visual wonder that far outshines the deficiencies of the screenplay. While the images may not coalesce to any conventionally satisfying measure, they nonetheless hint at a young filmmaker with real talent. As a debut, Come Swim is admirable. It may not be entirely effective, but it does serve as a reminder that the best way to learn filmmaking is to pick up a camera and shoot.

Come Swim, the experimental 18-minute short film from actress-turned-director Kristen Stewart already premiered at Sundance and screened in the Special Screening section in celebration of the 70th anniversary of the Cannes Film Festival. The short is Stewart’s ambitious directorial debut and is structured into two parts.

Josh (Josh Kaye), the protagonist and basically only character on screen, is introduced in the impressionist first half of the short. The film opens with the image of a slowly-moving wave and then cuts to Josh floating underwater. He is about to drown but wakes up on a mattress in a run-down and cold room. Dehydrated he tries to satisfy his immense thirst by chugging one bottle of water after another but it doesn’t have any effect on him. While he stumbles around the apartment, a woman’s voice can be heard. It keeps on repeating the same sentences over and over again and starts to overlap with Josh’s own voice. Josh then is seen driving around in his car visiting several locations, always drinking water yet he dehydrates and deteriorates at the same time.

The nightmarish first part is followed by a realistic take of Josh sort of re-living his previous nightmare. He wakes up in his now nicely furnished apartment and gets ready for work. Similar to before, he keeps on hearing the same voices again – this time around they don’t seem threatening but intimate and also flirtatious. It’s obvious that he is struggling with a recent break-up and its painful memories. Driving around, he passes by the same locations we have seen before and eventually ends up at the beach, ready to jump into the waves of the ocean and take a swim.

Stewart’s short, to which she has also written the script, is a solid and unconventional debut. Despite its experimental form, Come Swim sticks to a sort of linear narrative structure. It explores the heartache and pain caused by a break-up and coming to terms with it through abstract and often haunting visuals, accompanied by an electronic score composed by musician St. Vincent.

Posted by Mods TeamKristenSite at 3:59 AM