Kristen's interview with the HFPA at the Cannes Film Festival 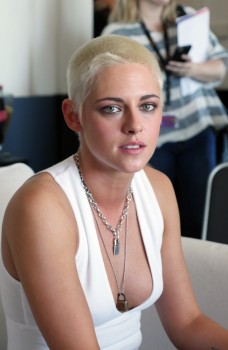 Kristen Stewart is in Cannes making her directorial debut with her short film Come Swim. Stewart, 27, is not new to Cannes - she was here as an actress with Twilight and Café Society and again last year in Personal Shopper -  but this is the first time she's here as a director and screenwriter.

Come Swim is inspired by a series of paintings and poems that she herself developed over the course of four years - as she told members of the HFPA at the Cannes Chanel suite, for which she's a model and testimonial. She was transfixed by the image of a man sleeping at the bottom of the ocean, an image which she had found “disconcerting” and which inspired, in many different variations, most of the poems she has written and the sketches she painted over the last four years. The film, which Kristen hopes to eventually expand to a longer version, follows the story of a thirty-something man (Josh Kaye), caught in various states of pain, depression and despair. He drinks water endlessly, and yet cannot calm his thirst. He's over-saturated, finally sinking to the bottom of the ocean, while a female voice (whispered by Stewart herself) repeats the same things, while dryness and extreme wetness blend.

During our interview, Kristen wore a tiny white sleeveless top, short black hotpants and leather strap boots around her legs (Chanel of course); her hair - super short –is dyed gold. It's a shock to see her ... but her magnetic green eyes are the same as the ones half the world has fallen in love with.  “I am more relaxed this time in Cannes, I feel I don’t have responsibility to a director, like in the past. Thierry (Fremaux, director of the festival) was nice, he said ‘we love you here, come as early as you like and enjoy it’!”

And so she is, on her second day in Cannes, happy to talk about the film and water. “You are subject to water in every way, you need it to survive yet is so much stronger than you,” she says. “The idea behind the movie is that the only way to really float is to give yourself to something stronger than you. I am a control freak and I hate water, personally, I am claustrophobic, not a beach person, so it makes sense for someone who lost inability to put their fingers on the pulse of normality, who cannot communicate, which is so common to so many of us, to put him during an epic subject state. if you fight it you are going to drown.”

The film, she continues, is also a reflection on the state of the ocean: “I have seen images of dirt and plastic at the bottom of the ocean, I remember the picture of a chair down there.”

The short hair, she explains, was brought about at first by the requirement of the character of the film she has been shooting, coincidentally titled Underwater, where she plays an underwater engineer; the film, an action thriller directed by William Eubank, forces her to wear a 100-pound suit – helmet included - which has left her whole body in aches and pains: “I am exhausted and physically need to rest for a while,” she says. But not for long: her next project, JT (directed by Justin Kelly), is coming in the fall: it is based on the true story of JT Leroy, a woman who wrote a fictional memoir pretending to be a transgender writer, a role which will require for her to wear several wigs - hence the decision to keep the short buzz for a while longer.

And after that? “I am writing,” she says, “and looking for a movie to do as a director, but it's not easy.” The short film experience was great because “in a short there is not shape, you do not have to entertain in a standard way, and this allows you to incorporate the visual narrative into the esoteric spirit and emotion. If you have an hour and a half or more, you are forced into a narrative structure. Obviously as a director it's better to start with a short!   Like with a video music, you can do and experiment with anything.”