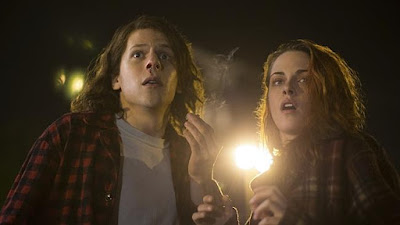 … Kristen Stewart says that if had her time over, there’s not a thing she would do differently.

“No, I would say keep going girl. Things are going to turn out really f**king awesome,’’ says the 25-year-old Stewart formerly known as The Twilight Saga’s Bella Swan.

“It’s been hard, but obviously every step I have taken has led me to this particular spot."

“And I wouldn’t change it. Not personally. Not professionally. Nothing.”

Stewart is hardly suggesting that she hasn’t made her fair share of mistakes. Or even that she doesn’t have regrets.

But less than three years after the final Twilight film opened in cinemas across the globe, there’s already a sense that many of her more bruising encounters with celebrity are being viewed through her rear view mirror.

Admittedly, Stewart is enjoying a particularly sweet spot in her professional career.

“I think I accidentally got very lucky and worked enough in a condensed period. Who knows, it could fall apart yesterday. Maybe it did,” she says.

“But when people do things because they are genuinely drawn to them, when there is just a compulsion to do stuff, you can’t deny them."

“Even if my movies weren’t successful, I would do the things that made me happy and I would find the people who were happy doing it with me.

She is currently shooting the new Woody Allen film in California with Blake Lively, Steve Carell and her American Ultra co-star Jesse Eisenberg (with whom she also appeared in Adventureland.)

And in February, Stewart became the first American actor ever to be awarded a prestigious French Cesar award for Clouds Of Sils Maria, in which she starred opposite French actor Juliette Binoche.
Stewart more than held her own in the somewhat ironic role of publicist and personal assistant to Binoche’s ageing diva — Chloe Grace Moretz plays the celebrity-hounded star-on-the-rise who has embarked upon an ill-judged affair with her married director.

“It felt great but also shocking because (the French) are as harsh as hell, they are bastards,’’ Stewart says.

“I can only say that because they are some of my best friends but obviously it’s like a tough crowd. I was so nervous but Juliet said: ‘don’t worry, you will never win, they will never, ever give it to you’.

“I really took her word for it. So when I did win, she screamed in my ear.”

In what appears to be a mutual admiration society, Clouds Of Sils Maria director Olivier Assayas has already signed Stewart up for his follow-up project, a horror/fantasy film called Personal Shopper.

“I have just had such a warm experience creatively with everything I have done (in France),’’ she says.

“They have a different way of consuming art that I really do admire. It’s not about entertainment, but really and truly about the history and the mark you are making and what you are saying. It’s f**king important. I take myself very seriously and I feel pretty much at home there artistically.”

But smart career choices and a solid work ethic are beginning to change popular perception of the actor — nowadays there are almost as many column centimetres devoted to her projects as there are to her personal life.

“It is gratifying, especially considering I haven’t really changed my game,” she says.

This new-found confidence might explain her foray into comedy — albeit a very black variety — in American Ultra, about a small-town stoner who is completely oblivious to the fact that he is actually a lethal, CIA trained killing machine until his former trainer activates him.

“I basically play the straight man to Jesse’s neurotic, overly-analytical character,” she says.

“It was fun keeping up with him. I didn’t put too much pressure on myself to be funny.”

Stewart pauses. You can almost hear the cogs grinding insider her brain as she makes a conscious decision to open up a little bit more.

“Right now, I think I am sort of hiding behind the straight man thing,’’ she admits.

“The first thing I did, when I heard the director was finished, was call him up and say: Am I funny? Am I funny? Please tell me! Did it work?

“Generally speaking what I can say is that it is a good movie. We held it together. It is very real. But I think I definitely have my moments.”

Stewart says she would love to have a shot at a more traditional comedic role.

“Absolutely. I definitely want to challenge myself further.”

Further guaranteed to test her creative limits is Stewart’s often-expressed desire to direct.

“It’s my obsession. It’s one of the only things I think about. It drives me absolutely up the wall crazy. But I won’t do it until I am ready. I have worked with such incredible people, I don’t want to fall short."

“But at the same time I don’t want to be afraid of messing up. At some point I just have to throw things against the wall and see what sticks.”

Source Via
Posted by Mods TeamKristenSite at 12:59 PM