Kristen's interview with the LA Times for 'Equals' 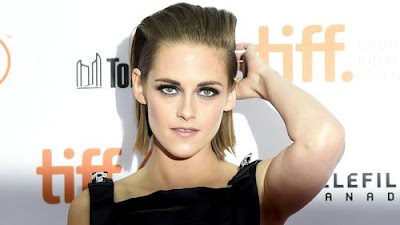 Kristen Stewart has been making the rounds of plenty of film festivals lately: Sundance for “Camp X-Ray," Cannes for "Clouds of Sils Maria,” Toronto for the Alzheimer's drama “Still Alice." And that was just In 2014.

On Sunday, she rode back to Toronto for yet her latest fest offering: the dystopian romantic drama "Equals," directed by indie darling Drake Doremus and co-starring Nicholas Hoult.

Appearing thin in a leather jacket and an abundance of rings,  Stewart ‎waved aside the idea that she had embarked on a new chapter after five "Twilight Saga" films, the last of which came out in 2012.

"It looks from the outside that I had a really commercial career and then started doing more cinematic pieces," she said, in a lounge space surrounded by foosball and rod hockey, several hours before "Equals" was to make its North American premiere here.‎  (The film, which as of Sunday afternoon had several U.S. distributors interested, debuted at Venice last week.)

"But if you look at my career, typically, it's been made up of more indie films that end up at festivals. And even 'Twilight' started indie," she continued. "I mean, it was‎ directed by Catherine Hardwicke."

‎Still, the millennial super-celeb acknowledged  that "Twilight" had ballooned in a way that gave her more than her fill of a certain genre, and made the last few years a welcome respite.

“I didn’t have my eye on the prize in terms of needing to convince people I could do work that is difficult and not easily digestible," she said. "But I am pleased with the effect [the past few films have] had. After ‘Twilight,’ you get offered a ton of fantasy flicks. It gets a little tiring. It’s like, ‘What makes you think I want to do it again?' ”

"Equals" certainly has a high-concept genre premise. The film is set in a genetically engineered future in which love and desire have been bred out of humanity and even outlawed -- indeed, stigmatized as something called "Switched-On Syndrome." And the movie relies on the same forbidden-love conceit that made Bella and Edward irresistible to so many.

Stewart's Nia and Hoult's Silas work side-by-side in one of many hyper-efficient design and lab modules of this world, until one day they discover they have stirrings, both in general and for each other. Those emotions are not just frowned upon but  punishable by exile to a torture camp of sorts known as the DEN, which sets up the movie's dramatic tension: As with "Twilight," Nia and Silas can either live separately in peace or together in persecution.

That's pretty much where the similarities to the vampire franchise end, however. As directed by Doremus (more on the filmmaker, who was responsible for Sundance and Toronto breakout "Like Crazy" four years ago, later in the week), the picture follows the rules of indie films  rather than commercial Hollywood. Narrative unfolds at its own deliberate pace; emotions are muted instead of shouted.

Stewart’s performance, though not entirely dissimilar to Bella in its stoicism-gives-way-to-passion vibe, has more texture and depth than her “Twilight” work; her tendency toward a kind of performance restraint plays well in the poker-faced world Doremus has created, but also makes the rewards that much greater when expressiveness finally does creep in.

Aesthetically, “Equals”  is also a world away from "Twilight," with an ethereal score and a bright, spare look courtesy of cinematographer John Guleserian. (It won't go unnoticed by some that the film is the spiritual obverse of another Toronto pic, Yorgos Lanthimos' "Lobster," which takes place in a world in which being single is forbidden.)

Most significant, perhaps, is "Equals' " interest in big ideas, including the possibility that this grand future-canvas is actually a more intimate metaphor for our own feelings after a failed relationship. Too much heartbreak? Shut it down, biologically and in other ways.

“Sometimes it's easier not to feel. You go through a ... breakup and you say you wish you never did it,” Stewart said, not specifying her own much-publicized romantic life, perhaps not needing to.

“Then, of course,  you do it all over again. Because if you took emotion out of our lives, we'd cease to exist. And pain is closely tied to pleasure, anyway; it's everything that makes me feel alive."

Stewart has become more self-assured in interviews, even if her words can get ahead of her thoughts. She is also more ambitious in her career choices, bringing on the auteurs fast and furious lately. She is currently living in New York, shooting Woody Allen's latest -- a match, given the filmmaker's interest in emerging talent, that seems as natural as Bella and vampires.

For one of the most scrutinized stars on the planet -- as many as a thousand people turned out in the rain to shriek and get a glimpse of Stewart as she made her way to the premiere here Sunday afternoon -- the actress said she is trying to tune out other voices as she continues working.

"I've never navigated my career in terms of perception," she said. "It would be so unnatural that I wouldn't have the wherewithal to carry on with the script. So may people put their hearts into a movie, that unless you feel compulsively strong about it, there's really no point in doing it."