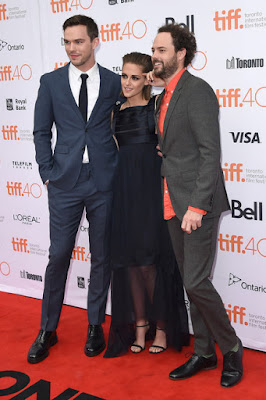 Drake, your film presents a world that is kind of a peaceful utopia that is also a dystopia — which is a popular topic lately!

Drake Doremus: I think it is a great thing. I think a lot of what the society of this collective does is actually really positive and really good. It’s really zen-like and harmonious and beautiful and calming and wonderful. But also, by virtue of fixing a lot of things, you kind of do some harm as well. So the grayness is interesting to me. You remove emotion so people aren’t killing each other and there’s no religion and there’s no politics, it’s like, well, that’s great, but at the same time, if you do all that, you might remove some of the most intrinsic things that are really important and that we value as human beings.

What brought you to this project?

DD: Well, I kind of had the idea of simply just a world in which love doesn’t exist: Does love find a way, and does the human heart end up transcending that? I brought that kernel to [screenwriter] Nathan [Parker], who’s super talented. I’m a big fan of Moon, and other things he’s done. So I was like, So, I want to try something totally different. I want to stretch and do something outside of my comfort zone.

DD: Are you coming into this?

DD: Fuck yes! That’s awesome. Well, now this is going to get elevated. Now everything I said is going to have meaning.

Kristen, what drew you to the project?

KS: Well, generally speaking, I absolutely loved Like Crazy. You could feel how absolutely true it was. That’s what you always strive for while making films. So I definitely wanted to work with him. And the very, very touched-on subject of awakening and falling in love for the first time and getting to know yourself as a human being that exists just as an animalistic entity that doesn’t deny itself? I’m so about that. And so I knew that me, Nick [Hoult], Drake, we’re all in this perfect position to sort of meditate on and — just like literally, um, vomit out all of these things that we’d all been through in a way that was simple, and in a way that we could reflect on and was just awesome. Like, I basically just wanted to follow him and Nick around while getting to know myself. It was just the most honest and self-aware acknowledgment of being alive that I had seen in a really long time.

There are a lot of times in our lives where we have to subsume emotion or hide what we’re actually feeling — for both of you, how do you confront that?

KS: People love to make this topical, and they involve drugs and social media and all of that. But there are a million ways in which we like to deny our true selves. So, like, you know, I don’t think that we’ve gotten more progressive emotionally. I still think we view true feeling and true expression of that as a weakness, so it was nice to just unabashedly face that. I thought that was beautiful, and obviously as a woman, I’m like, you know, our strength is to harness and utilize that rather than subdue it and be leaders that seem stoic and unaffected.

So, I think, to take the quintessential embodiment of a woman and the quintessential embodiment of a man and show that they’re much more similar than we might, like, stereotypically think of them, that we all are actually quite similar, is beautiful. There’s a fluidity to what’s happening in our generation in terms of love and equality, and I don’t just mean the gay stuff, but that definitely is involved. It’s really inspiring to see the balance of what a man and a woman can do for each other, and how strong they can be together. And how different we are, but that when it comes to it, we’re quite the same.

Drake, how do you look at this?

DD: I don’t know how to add on to that? How do I add on to that? Um, yeah, I think equality is a really interesting current topic, and I think the film very much so harkens back to in the ’50s and that sort of structure of like, Well, it’s appropriate to feel this and be this way. I think it’s a very current movie in many ways. This movie could take place in the past, or the present, or the future, and it would be the same movie. It’s about human beings that cannot get rid of how they feel about each other. And that’s so simple.

KS: Sometimes it’s all you want to do. It’s just too much, and you go, Oh, can I get rid of it? It’s like,
No, then you would cease to exist, so you have to face it.

DD: And that’s the question that we’re asking is: Why are we, and what are we doing here? What is the point of our lives? What makes our lives worth living? It’s really simple. I think the film answers that in a very simple and hopefully poetic way.

KS: And somebody who’s been hurt or made completely cynical will probably look at this the same way they look at a couple holding hands on the street after six months out of a breakup. You know, “Call me in a year and tell me how you feel! And fuck you!”

It sounds like, as you were making it, you were exploring these issues among yourselves so you could make it work in the film?

DD: Yeah. What was awesome about Nick and Kristen jumping in was that they understood what we were going to do, and they gave themselves wholeheartedly to it. It was about being vulnerable and honest. You see a lot of sci-fi movies about people playing characters, and it’s about the world. This is just about the human heart and about reality and about us as human beings. We made something really personal and really honest to us, to our experience and our lives. I think the film really represents that.

So was that what your rehearsal process was like? Sitting together and sharing personal experiences?

DD: We did the dishonesty stuff, too. We did them both. It was all about what is real and what is not. We’re trying to explore the human heart and experience of falling in love and then maintaining that. It’s really a metaphor for remembering what you saw in somebody in the beginning, and trying to understand why you’re in that [relationship] in the first place. You grow and change and the relationship moves on. But why are you in that and remembering that?

Kristen, one of the things you’ve experienced from the outside looking in is that a lot of people want to know who the real you is. How do you figure out a way to maintain honesty while also maintaining privacy?

KS: I think it’s totally dependent on context. If somebody’s being honest with me, and there’s an honest, genuine question asked, I do not ever shy away from it. I am drawn to it. All I want to do as an actor is reveal myself, rather than construct something that I can take credit for as somebody who tells stories. I’m not telling stories. I’m drawn to stories that I have inside me. Even if they’re deeply buried, there’s probably a reason why I’m attracted to things. So the process of making the movie is answering those questions.

But yeah, I don’t have any ability to fake something that I don’t know. So this role was an opportunity to really get to know myself in a way that you wouldn’t [normally] take the time to sit and reflect and acknowledge, because it’s scary and it’s painful. I had fears at first, sure, but my whole goal, and the reason you choose to work with certain people is because you feel less of that fear. And that fear can motivate you, but actually it doesn’t inhibit you, it opens you. So I want to keep my private life private, I suppose, but only in terms of selling it. I’m not private. I just really want to be true to myself. I have this aversion to faux journalism. It’s some bullshit. Like people are like, Oh, I want to ask you a really dishonest question, and then judge you for being a liar. It’s like, Well, yeah. You asked me a dishonest question, therefore I’m going to avoid you. And it’s not me being guarded. It’s actually me wanting truth, rather than feeding into bullshit.

Posted by Mods TeamKristenSite at 7:53 PM