Kristen's interview with The Guardian for 'On the Road' 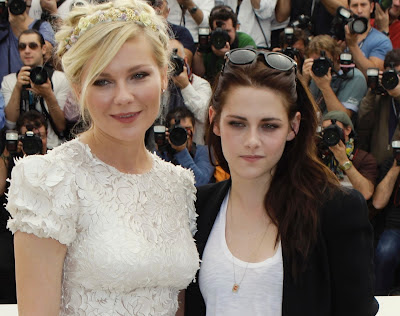 For many, On the Road is primarily one for the boys. Jack Kerouac's obsession with the egotistical and hedonistic drifter Neal Cassady dominates the book, with the female characters relegated to the back seat, disposable objects that float in and out of the tale at the convenience of the proto-beat lads.

That's one view. But to director Walter Salles, the novel's female characters, especially those based on Cassady's long-suffering wives, are "the silent heroines" of the piece. Accordingly, he has cast two of Hollywood's most sought-after actresses – Kristen Stewart and Kirsten Dunst – to play them.

Stewart is Marylou, the book's version of Cassady's first wife, LuAnne Henderson, who joined Cassady and Kerouac on their road trips across America; Dunst is Camille, aka second wife Carolyn Cassady, who stayed at home with the babies in San Francisco. Cassady flitted between these women, sleeping with Carolyn while married to LuAnne, keeping LuAnne as a lover after he had divorced her for Carolyn. Kerouac made little effort to give his female friends depth and dignity on the page; the film attempts to remedy that oversight.

Stewart's prominence in the promotion of the film reflects both that intention and the Twilight star's high profile. The 22-year-old also happens to be a surprisingly passionate fan of the book.

"On the Road was on the reading list in my freshman year and thank God, I chose it," she recalls. "It looked much more fun than any of the others. I knew that it was about counterculture, and when you're 14 years old and putting ridiculous anarchy signs on your backpack that's just what you're drawn to."

"You know, I'm from the Valley. I come from a very comfortable, very fortunate household, but the kind where you can become lazy and complacent. So when I read On the Road I thought: I have to find people like this, who will push me, who don't compromise on their desires, even if they're different to the norm. It really did inform how I wanted to live."

In this nonconformity, she's thinking of her character as much as the men. "I love Marylou. In the book she's fun, she's sexy, she's vivid, she's progressive for her time. She jumps off the page and smacks you in the face."

At the same time she admits that "it's not a book about the girls, they're on the outside of things", and that she had to depart from the story to flesh out the character. She met the late LuAnne Henderson's daughter, Anne Marie Santos, who "helped me unlock her mother, connect me to her as a real person", and listened to hours of taped interviews with LuAnne, made by the Kerouac biographer Gerald Nicosia, which proved to be revelatory.

"Suddenly LuAnne had a voice, and we all fell completely in love with her. Unlike the boys, she wasn't rebelling against anything, she was just being herself, being with the people she loved. For me, getting to know this woman made it so much easier to avoid the caricature of the sex object. LuAnne never made herself a commodity. And she really is this amazing link between the two boys; it's a grand statement to make, but that adventure might not have happened without her."

Dunst, 30, recalls a different attitude to the book when she first read it. "I was more drawn to female writers when I was younger – Sylvia Plath, Jane Austen, I loved the poetry of Edna St Vincent Millay. I only read On the Road because there was a guy who I had a crush on and that was his favourite book. So I kind of read it to be cool. But I was very young, 16 years old, and didn't really get it."

That said, she joined the film because "it's one of the great novels in American history, so of course you want to be a part of that". Moreover, she read and felt a strong connection to Carolyn Cassady's own, autobiographical account of that time, Off the Road, lines from which actually made their way into the film's screenplay.

"Carolyn is still alive, living in London. I missed the opportunity to meet her, but her book is what I based my choices on. For that period she was such a renaissance woman. She had a master's degree in theatre, and was a graceful, accomplished woman in her own right, but worked as a nurse to care for her children.

"She could have done a lot had she followed another path. But she met Neal and fell in love with him, it was as simple as that. He was so charismatic and handsome, and she was drawn to him like everyone else was, like a moth to a flame, no matter how much he would hurt her. I think it was amazing the way she lived on her own, raising the kids on her own, but was still generous in the love she had for both Neal and Jack."

The two actors had very different experiences making the film, in keeping with their characters. As the isolated Camille, who never got to gallivant in the Hudson Hornet, Dunst didn't meet her co-stars until late in the shoot; in contrast, Stewart was immersed in the bootcamp that Salles set up in Montreal as a research base for his cast, and the intimacy she developed with Garrett Hedlund and Sam Riley is evident on screen – on the road, in super-charged dance scenes with Hedlund, and love scenes that might surprise Twilight fans.

"The bootcamp was about so much more than research," she says. "We got to know one another so well. Garrett, Sam and I needed to feel safe and completely willing to lose control with one another. And it's hard to do that for me, because I'm the opposite of my character. I'm usually pretty self-conscious, but I didn't care at all when I was with these guys. I got to live more in those four weeks than I usually do. This experience was unparalleled, for me."

Despite Kerouac failing to do the women justice, Stewart and Dunst feel his celebrated work does have something to say for a modern audience. "It's an inspiring story that opens your mind to other ways of living your life, and that's timeless," says Dunst.

Posted by Mods TeamKristenSite at 5:12 PM

Email ThisBlogThis!Share to TwitterShare to FacebookShare to Pinterest
Labels: interview, Kirsten Dunst, On the road