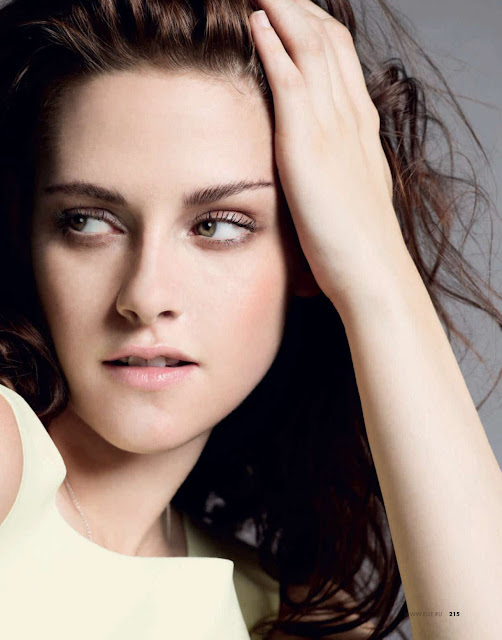 Kristen possessed an important quality. She manages to look natural in all situations, even on the red carpet. For example, at the On The Road premiere she was wearing an exotic dress by Nicolas Ghesquiere for Balenciaga and her hair was loose and she even moved her fingers through her hair at times in front of surprised photographers, while her older colleagues were afraid to move their heads, so as not to ruin their hairdos. Kristen came to the interview with Elle barefoot, supporting her image of “nature’s child” who has no written rules.

Elle: On The Road is based on a cult novel by Jack Kerouac. Did you read the book after you got the script?

Kristen Stewart:  I read it when I was 15. It opened my eyes to life, literature, to an “alternative” take on life not taught in schools or with family. I am trying to read the works of other writers of the “beat generation” The Naked Lunch by Burrows and Howl By Ginsberg. But they did not get to me as Kerouac did. I literally started reading after I read him.

Elle:  You can hardly call your character, Marylou, positive. Lover of alcohol drugs and group sex..

KS: Marylou has a lot more potential that it is seen at first sight. She has rare selflessness and kindness, desperately trying to find love, and for it, she is ready to go to extremes. I can understand this character but she is not close to me; I would not be able to do everything to satisfy the needs of other people; I love myself too much. But it was this very contrast that I liked most. I felt like teasing myself, like subjecting myself to challenges.

Elle: Can you relate to your Twilight character more?

KS: I like Bella because she is her own person, does what she wants, not paying attention to others, is not worried about what impression her words make. She does not have friends; she is her own best friend. I also had few friends. I never tried to be popular. I used to get annoyed by teenage parties. It seemed like everybody tried to attract attention at those parties, to be louder than others, smarter, but in fact, nobody ever says or does anything smart

Elle: After the premiere of On The Road, the journalists wildly discussed the scene where you are nude.

KS: I knew that only that scene would be noticed in the whole movie. I don’t care what they think about my nudity. I am proud of what I did. This suited Marylou’s character. Without getting nude, I would not be able to express the essence of her character. There is no place for shame in this movie.

Elle:  Looks like Salles’ picture helped you to break from the image of the eternal lover of a vampire from Twilight.

KS: I don’t agree with your cynical attitude towards Twilight. If there had been no Bella, I wouldn’t have gotten other parts. I am grateful to her for what she brought me.

Elle: What does it mean to you to be the favorite of millions?

KS: I don’t ask myself questions like that. I don’t understand what being  a star means.  Yes it is easier for me professionally, but my popularity did not change my personal life much. I can still freely walk my dogs-Oz, Jack and Lily. Maybe because I am tiny, I don’t easily get noticed. Rob [Robert Pattinson –ELLE] is less lucky; he is easier to notice in a crowd.

Elle: Your fame brings some responsibility. For example, you represent Florabotanica by Balenciaga.

KS: I love Balenciaga for its daring feminine and sexual style. This project has great creative potential and I am so proud to be the face of the new fragrance of this brand.

Elle: In real life, you dress like your Twilight character: loose t-shirts, jeans, sneakers. But you also wear dresses by famous designers. For example, you had a few wonderful showings at the premieres of On The Road, Cosmopolis [starring Robert Pattinson], and the next part of Twilight still, what is your relationship with fashion?

KS: I don’t have a desire to have dresses by famous designers. But what I could not refuse was a group of some talented creative guys, with whom I was lucky enough to work

Elle: By the way, speaking of guys, who do you prefer? Brad Pitt or George Clooney?

Elle: Mysterious lover or a friend?

KS: As for men, I don’t have expectation or stereotypes. I follow my intuition.

Elle: They say it’s hard for you to say goodbye to colleagues when shoots are over.

KS: When you live with people like a big friendly family for several months, you get attached to them. Not just them but their lifestyle, things. For example, it was hard for me to leave the wedding dress behind. First, there were long fittings, and then I put it on and did the scene quickly. And then the costume designer was running to me to take it off. I almost cried; I wanted to wear it for at least a day more … or the 1949 Hudson car from On The Road. There was something sad and solemn about the last day. We were shooting a scene; Sam Riley and me were in the middle of the road, seen in a car mirror. It will stay in my mind forever.

Elle: How do you get ready for the roles? Read books? Visit the place of action?

KS: Before Salles’ film, I did a road trip with my two girlfriends. The trip was a lot shorter and we did not look for adventures, which the characters in the movie encounter. As for Twilight, before the shoots, I was interested in books for teenagers. I always thought that adults, who have forgotten their youth, wrote them, but when we started doing Twilight, I changed my mind and fell in love with the story. But I still prefer realistic novels and old editions.

Elle: Can you describe yourself in three words?

KS: Charming, slim, and unpredictable.  Others would say ungrateful, arrogant and conceited.

KS: I like doing only the things I like. I hate smiling on order. Hate telling jokes from my life.

Elle: Well, no jokes then. How does your ordinary day go then?

Elle: Which question bores you?

KS: When I am asked how to become successful.

Elle: Your answer to that?

KS: Don’t look for idols for yourselves and don’t blame others for your failures. Create your own dream and walk towards it with firm steps.

Elle: One of your latest films is a fairy tale, Snow White and The Huntsman.  Do you believe in miracles?

KS: No. In tales, I like connection with reality most. Even in fantastical stories, it happens that characters encounter problems and they fight for their happiness themselves without the help of wizards.

Elle: If you had magic powers, what would you do?

KS: I would turn my dogs into people. For a short while just to see how they would look and what would they talk about.

Posted by Mods TeamKristenSite at 1:07 PM