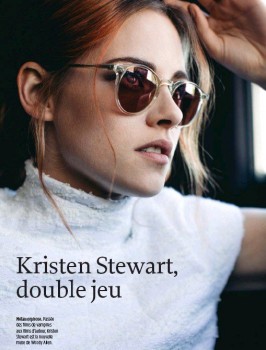 "I became excessively, ridiculously and stupidly famous at the age of 18. It happened overnight and it created a whole gossip industry capitalizing on the interest kids had when it came to me. Some people tried to upset me just to have a story to tell. I was only a kid, I hadn't learned how to assess the intentions of the people who were interviewing me. So, I was always on the defensive and I understand that some people may have thought I was insensitive or unpleasant." if there is one thing that Kristen Stewart doesn't lack, it's lucidity. Only four years have passed since the end of "Twilight", the saga that transformed vampires into charming princes and the actress into the idol of teens, but she's already learned everything from her past experiences. She knows that, from the time her face was on the cover of every gossip magazine, the public still thinks of her as a gloomy actress, unable to deal with her popularity. She also knows that the media will keep on labeling her as the "Twilight star" when she will open the Cannes Film Festival on May 11th with the last Woody Allen film titled "Cafe Society". This, when it's only the third time she proves her worth at the Cannes Film Festival, after "On The Road" by Walter Salles in 2012, and "Sils Maria" by Olivier Assayas in 2014. She knows it and she doesn't care: time will do its work.

Incidentally, you only need to see the delicious "Café Society" to realize this. Cute skirt, pink cheeks, a headband with a bow on a bobbed hairstyle, Kristen Stewart shines like never before as Vonnie, a young secretary being wooed by two men in Hollywood in the 30s. It has to be said that it was the condition for her to get the role: "That's the reason why I thought I'd never get the role!" she tells us. "Vonnie is a really soft character, with a lot of drive ; Woody told me it would only work if I was capable of showing this kind of happy energy. I had to work on that a lot." The result is even more facinating knowing it's never acquired. Far from the charm and the inner bubbliness of an Emma Stone, the director's previous muse, Kristen Stewart always seems on the verge of staggering. Pretty in her own way, full of a playfulness from where we can also sense some melancholy, dull and yet madly magnetic.

We understand Olivier Assayas when he says he saw in her "more than a talented actress, someone very unique". Their collaboration on "Sils Maria" earned Kristen the first César for an Actress in a supporting role ever given to an American Actress. Most importantly, according to Assayas, it earned her "a liberty that she had never felt in other movie before." "I am used to directors being very directive. In the US, most of the time, you're told what you're supposed to do and what you should be feeling" Kristen herself confirms, "Olivier is not a man of many words. Overall, French cinema is more intuitive." Inspired by each other, they're rediscovering each other in "Personal Shopper", presented at Cannes this year. "There is something to be said about Kristen's observation, which made its way into my writing.", the French director tells us, who wrote for her this fantasy thriller, about an American taking care of the wardrobe of a french celebrity in Paris and is also grieving the loss of a brother with whom she's trying to.... communicate! "I wanted to talk about this pull we all feel between the materialism of our contemporary world - which is felt a hundred times more for a star like Kristen - and the intimate dimension specific to each of us, haunted by her dreams, her fantasies, her worries, and generally, by an invisible form." he explains.

Ambiguity. Twilight means "crépuscule" in French, that time of the day situated between night and day and which describes Kristen Stewart very well, never truer to herself than in the obscur-light. About her character in 'Café Society', the one who makes men go crazy (yes, the actress) says bluntly: "I love that this a heroine who is completely at easy with the idea of taking an unconventional road. I find that refreshing that she doesn't feel any guilt. She choses one of the two men who want her, and she could pick the other. It's natural to hesitate, there are so many different road that we can take in life." In different terms, told differently to an American magazine who asked her about her sexuality last year: "I'm an actress, man. I live in the ambiguity of this fucking life!"

Today, the actress is about to add another ambiguity to her life by going behind the camera. Wanting to direct, she says has been gnawing at her for a few years. It's true that with her past, of being a Californian kid, raised by her mom - a screenwriter - and a dad - producer - who fell in the world of acting at the age of 12 (In Panic Room, alongside Jodie Foster), there were chances that she was going to go in that direction eventually. "I grew up on set, I love their summer camp side. I'm fascinated by the process of creating a film, and I want to find a work for which i'd be ready to give up my life." For now, it will only be a "small student film", but it will be "damn cool", she says. We won't know more than that, aside from the fact that she will be filming it this summer and she won't accept any role until it's finished. More reasons to savor her double exposition of the Cannes red carpet. After Twilight, the Palme d'Or?

"Café Society" by woody Allen, out on May 11th in France and "Personal Shopper" by Olivier Assayas, out on October 19th in France also.

You can read the interview in French at the source here.

Source Via Translation SomeLostBliss
Posted by Mods TeamKristenSite at 3:29 PM