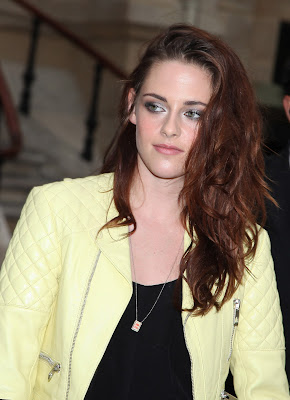 Up until now, Balenciaga’s only fragrance face has been Charlotte Gainsbourg. What’s it like to be in that kind of company?

I wish I could choose a better word, but I think she’s stunning. I sat next to her at the show [last season]—which was the first experience I had at Balenciaga—and I was so ridiculously intimidated by her! I didn’t even say hi. I was just kind of muted by her. It’s an odd relationship that us actors are allowed to have with fashion. For me it started at an extraordinarily young age. I met Nicolas [Ghesquière] when I was 12 [on] this little project that felt very similar to a photo shoot. A rack of clothes comes in and you can just pick out what’s from that company. [Balenciaga] was the first fashion brand I recognized.

Were you drawn to the clothes then?

I’ve never done anything tactfully. I just wanted to be around Nicolas. It’s like movies. You find kindred spirits. You say, “We need to make something together.” My creative vision is not clothes but…I want to be around that.

Nicolas has said that your “rebellious femininity” is what made you a good fit for Florabotanica. That characteristic seems to have followed you around a lot recently, especially in your work. Do you think it’s a pretty true character assessment?

Especially recently right now—maybe this is my age—you either have the boldness of heart or lack of fear that might differ from other people or you don’t. A true rebel, someone who is genuinely, authentically rebellious, has no idea that they’re doing it. It’s just natural. If you’re aware of it than you’re a contrived, fake person. Having Snow White [and the Huntsman] and On the Road—even Balenciaga—everyone is saying, “You’re taking on these strong roles,” and everyone is asking if I’m trying to convey these strong female roles. And objectively, yes, I am. But there’s also a void there right now and people want to fill it.

You’ve been wearing a lot of Balenciaga since joining the house officially. Have you had any favorite fashion moments with the line?

[Nicolas] made my Cannes dress. And I went to the Met ball with him. And we sat down together and I watched him draw this…thing. I think he would say that I had something to do with it, but that’s bullshit. I just sat there. I do love those graphic sweatshirts [from Fall 2012]. And the sheer long dresses—and the shoes! I love all of the shoes so much. I must say, I’ve seen the new [Spring] collection—and it’ so unbelievably cool. You need to know yourself pretty well to wear it, or it wears you. It makes total sense that it’s happening now, though. I don’t want this to sound arrogant, but it was made for me.

Speaking of red-carpet dressing, how do you go about choosing your looks for what has been a nonstop press junket for you that will continue when the final Twilight installment premieres in November?

A lot of actresses say you can play different parts on the red carpet, but I simply can’t claim that I can become someone I’m not. Tara Swennen is my stylist. I’ve worked with the same person my whole life. I can definitely unlock qualities and something very unexpected comes to the surface—and that’s fun, but you know instantly if [a dress] works or it doesn’t. You don’t even have to zip it up. It’s important to trust that.

Do you find wearing perfume—this perfume, specifically—to be an equally transformative experience?

[Perfume] is something that I’m just now stepping into, wanting to smell attractive. I’m 22. I wasn’t the 15 or 16-year-old girl putting on perfume. It’s such a funny thing that it does, that it suddenly gives you “something.” It puts you on another level. There’s sophistication to it. I feel a little bit…hello! And that feels really good. It’s sex. It’s vibrant. And thank God I liked [Florabotanica] when I smelled it; I’m not a good liar.

You’ve become known in beauty circles for your impossibly pale skin. How have you kept your complexion so perfectly alabaster?

I am really white. Although for my next project, I’m not positive, but I’m going to be blonde and really tan! I keep clean and moisturized. I have oily skin so I use Proactiv. It’s good stuff as my face is…active. Skinceuticals is really great, too. I just discovered their serums.

On set, how important do you find makeup, hair, and costuming to properly getting into character? Have you had any truly transcendent beauty experiences, like when you wore that black, Joan Jett shag in The Runaways?

Oh yeah. If I didn’t have that there would’ve been nothing that would make me feel legitimate [in The Runaways]. I wore stickers on my face, I made my nose wider with contours, I thinned out my eyebrows—I had a really great makeup artist, Robin Matthews. On Snow White, I worked with [costume designer] Colleen Atwood—there’s no one like her. Her clothes brought so much. We did a medieval fantasy film but nothing was fake—there was no Velcro! I need that. It’s the same on the red carpet; if you don’t feel good, you can’t sell it.

Be honest: Are you happy or a little sad to put your Twilight days behind you?

As sad as it always is to leave something, the reason you start that project is so you can finish it. I hold it so close, as I do with all my projects. I could interview about Panic Room right now. I feel the same way with Twilight. I got to live in that world for four years and it was the most indulgent experience I’ve ever had. The amount of relief at being done is unbelievable—and even that is kind of sad.

Style.Com via @KstewAngel thank you.


Posted by Mods TeamKristenSite at 4:27 PM