Kristen's full interview from 'In Their Own Words' 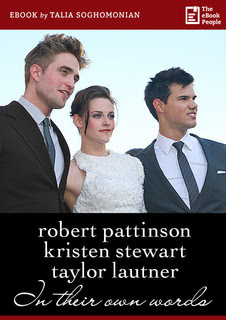 
Looking casually stylish in a pair of black skinny jeans, black heels and a white shirt, Kristen Stewart, 22, is in a friendly mood and seems excited about this next chapter of her life.   She talks about the end of Twilight, the transformation Bella goes through from human to vampire, how the franchise has changed her life, and the downside of fame.   A fan of Fifty Shades of Grey, her role inspired the book and she says she’s not too prudish to accept the role, should it be offered to her.

Can you talk about the transformation from human to vampire?

KS: One thing that I liked about Bella’s human version is that she gives as much as she wants to and doesn’t feel pushed. To me, she’s always been really honest, even if she’s technically lying to people, she’s emotionally very honest. Because of that, she’s sometimes unsteady, and sometimes I allowed her to be kind of just teenager-ish. It’s like, you are this very developed, mature version of what we all know her to be, but at the same time, you are this very young, new animal, quite a baby, and you are figuring out how to like use the tools that you have been given. It’s like a 12-year-old getting into a six-speed sports car and being like, "Whoa, so that was fun."

How about just the physicality? Any challenges to that?

KS: She’s so   strong. Yeah, that’s the thing. You want to get as close as you can to those experiences. I want to feel that strong, but obviously, you can’t always. Sometimes you have to fake certain things. I really appreciated it when we weren’t on treadmills. I liked being able to actually run on ground and get movement, actual space behind me, and there were different ways that we accomplished looking strong and fast and all that stuff, and my favorite bits were always the ones that we could actually do.

You look very different. You’re wearing a great jacket and the running and the new attitude. Did you have any input on that too?

KS: Yeah, absolutely. One answer to that is that Alice dresses her after she becomes a vampire, because she’s so busy afterwards and she’s so focused on other things, one having the self-control to not rip everyone’s throat out and even though that comes very easy to her, and the fact that she’s got this child, all these things, they dress her. So, for a second, I was like, "Do we hold onto the idea that Bella doesn’t think about it, and so she just kind of looks plain (laughs) and puts on whatever is handed to her and it’s a natural, easy thing, or did she choose these things?" Now her clothes are pretty straightforward, and she will wear a random pair of high-heeled boots, so it’s like, "Whoa, Bella, what are you doing? This is weird."

You have all become huge stars since the first movie. Did you notice any change, like the way people treat you on set?

KS: On the Twilight sets, towards the end, I found that people didn’t really talk to us anymore, which was weird. It was like they possibly were even told, "Hey, leave them alone. If you don’t have a reason to talk to them, don’t just go up to them." And I hate that. Don’t protect me, I’m fine, it’s like, now you are just completely isolating me, so thanks. And then it makes them seem like you are the one possibly who said that to people, which is like, do not represent me, ever. That is the most horrifying idea that that happens unbeknownst to me, but I am sure it does. Just really annoying.

Is it important for you to stay grounded and normal and effectual?

KS: No, I just want to sit by myself all day. (Laughs) Yeah, God of course.

Are you looking ahead to new projects after Twilight and do you feel like these movies are going to cast a long shadow in some ways because you will always be referenced, or is that something that you aren’t thinking about at this point?

KS: I mean, people will always talk about the fact that I got really super-duper famous on Twilight. If people who really love the books have a hard time seeing me in other parts, it’s kind of the ultimate compliment to really understand that. I can’t think of an example, but I’m sure that there are people who have experienced that and it hasn’t seemed to put a damper on anything that has to do with my personal experiences. I am so challenged, I’ve gotten myself into a position where I get to pick and choose my challenges, which is close to unparalleled. It’s very lucky and unique, it doesn’t happen as an actor and if I didn’t have that, then I would be pissed. If I didn’t have that, then I really would be worried. I think that I’m really proud of it and hopefully people keep talking about it, you know?

Have you read Fifty Shades of Grey?

Did you know it was based on your character? And if there were a movie, would you be in it?

Maybe you are being protected? Maybe someone didn’t take the call. (Laughs)

KS: No, probably not, I mean if they probably told me about that, it would be funny.

KS: It’s spicy. Yeah. I don’t know, I haven’t read the whole thing and it’s also a highly coveted part everyone is trying to. I don’t know, it’s… I don’t even…

But do you think you would be brave enough to do something like that?

KS: I haven’t read it, and so I mean, I know what you are talking about, I’ve definitely read some of those bits, (laughs) and it’s really nuts, I couldn’t believe it. I see people reading it and I’m like, "Dude you are in public, what are you doing?" (Laughs) But I’m pretty daring. It just takes the right story, and so I don’t know because I haven’t read it. I’m not avoiding it or anything. I just think it’s been made this big deal, so I don’t even know how to answer it.

And what kind of character would you like to do after this movie?

KS: I don’t know. Right now I’m about to do a movie called Callie that I’m really excited about. And it’s hard for me to project into the future like that, because I don’t know ever what it is going to
many feel like. You can tap into qualities that you don’t know you have, and always the first step of that process is reading something and being surprised by it, or being moved by something and going, "Wow. I didn’t know that part of myself."

Now that Twilight is over, can you reflect back on what was the scene that most touched you or was the hardest to shoot?

KS: There are so many of those moments throughout the entire shoot. She lives a whole little life and in five years, or four years, whatever it is, and God I think probably there have been a lot of challenges. I don’t know, ‘cause all the ultimate life milestones happen and I think maybe in New Moon I was definitely not excited about having to play ultimate death.

What was the most awkward scene you had where you felt like you were completely off?

KS: I think that if I should go back and do that moment again, I could do it better.

Did you take any mementos from the Twilight set? Have you stolen anything? Thumbtacks?

KS: No, I didn’t take those. I took all of her rings and stuff, I have all the bracelets, the wedding ring. I think I have a fake one, actually. I don’t think I have the real one. And I love how I don’t even know that. It’s probably sitting in some baggie somewhere, like a real big diamond.

What are you going to miss the most now that it’s definitely over?

KS: Sometimes there’s just like a feeling. Every set has its own feeling. It’s very consistent, there’s a mood on every set, and we recently did reshoots and as soon as we were back there, it was like, "Oh, fun. Wow, I can’t believe we are doing this again." And it’s crazy how it just assumes the exact same tone, and I will definitely miss that. That’s what people attach themselves to. I think it’s just day in and day out, and you find certain relationships and comforts and creative charges and highs and lows and then just like boredom with certain people, and then at the end you’ve made something and you are like, "Oh good job," and you can pat each other on the back. I always will have that. Even the other day at Comic Con when we saw everyone, it was like, "Here we are again." Instantly right back into that same mood, and I like that mood, it’s a good one.

And what do you miss doing the most doing that you can no longer do because of your insane fame? What would you like to do if you could?


The above interviews are taken from Robert Pattinson, 'Kristen Stewart & Taylor Lautner – In Their Own Words', by Talia Soghomonian (www.theebookpeople.com). Available at iTunes & Amazon, £3.74 and as enhanced version with audio for £4.99


Read Rob's interview at the source via @KstewAngel thank you :)

Posted by Mods TeamKristenSite at 4:50 PM