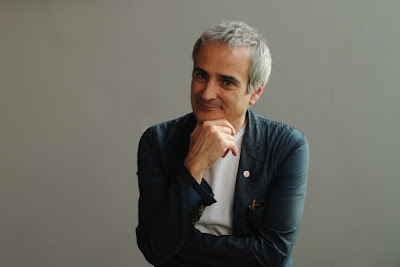 In a country where films like “Fast & Furious 8” and “Guardians of the Galaxy Vol 2” tend to dominate the big screen, it came as a welcome surprise to see that the film which won last year’s Best Director prize at the Cannes Film Festival, had finally come to Bangkok.

Making the arrival of “Personal Shopper” even more special was the fact that its director, renowned French filmmaker Olivier Assayas, had come to Bangkok for a special screening at Alliance Francaise the day before the film opened at Thailand’s cinemas.

Assayas, who appeared pleased to be back in Bangkok, had just been told that that the film he scripted for Roman Polanski, “Based on a True Story”, starring Polanski’s wife, Emmanuelle Seignier, has been added to Cannes’ official selection.

“Personal Shopper” is the second Assayas film to get a theatrical release in Thailand and marks the second time the director Assayas has come to the Kingdom to present a film. The last time was in 2005 when “Clean”, starring his exwife Maggie Cheung, was shown at the Bangkok International Film Festival.

“I made this film in English because I wanted to work with Kristen and she speaks no French,” says Assayas. “I also liked the idea of making a movie in Paris in a kind of specific space, which is the fashion industry. Paris is the world’s capital of fashion, so it is a city that sees a lot of people coming to work and shop. It has a very globalised industry, and the language of that globalised industry is English, so it is realistic that someone who is an English speaker could be part of that ambience.”

The director’s earlier films like “Irma Vep”, “Clean” and “Demonlover”, all have dialogue in both French and English, but “Personal Shopper” and his 2014 drama “Clouds of Sils Maria” are totally in English, which has posed problems in getting financing at home.

“Shooting films in English is a burden as it prevents me from getting access to subsidies in France. They will support only French speaking films, so making ‘Personal Shopper’ was a challenge. At the same time, though, it gave me the freedom of working with different actors. I was able to work with Lars Eidinger, who was in ‘Clouds of Sils Maria’ and is one of the greatest European actors today, and Nora von Waldstatten who was in ‘Carlos’,” says Assayas.

“Personal Shopper” marks the second time Assayas has worked with Stewart, whom he also cast in “Clouds of Sils Maria” as a young American girl serving as the assistant to international film star (Juliette Binoche).

In “Personal Shopper”, Stewart plays Maureen, a personal shopper for rich clients who lives in Paris and has a strange experience when she comes into contact with ghosts.

“When I was writing it, I was not completely sure this film was for Kristen, but ultimately it was. I think it has to do with how we met and how we functioned together. When we worked together in ‘Clouds of Sils Maria’, I didn’t really know her. I wrote the part of a young American girl and could have picked another actress. But I’ve always like Kristen, but when we started shooting, I realised that there is much more to her than I had imagined. She is much more complex. I discovered her in the process of working on ‘Clouds’. She has a supporting role and it’s dependent on the weird dynamic between her and Juliette. Working with her made me want to try doing something more complex, a film where she would have more space to invent or create a character.”

Assayas adds that the idea of a personal shopper for celebrities didn’t cross his mind while he was writing the script. “To me it was about a young woman, a foreigner in Paris doing a job that didn’t give her satisfaction. She finds some sort of salvation in her own spiritual life. The story grew from that and at first I was not sure what job she could have. Initially I thought she might be a stylist, but a foreigner who can’t speak French can’t be in that field of work. It needs specific skills. So I think it was more believable for her to be a personal shopper, which is a job you can do when stuck in a foreign city and need to pay the rent.”

Posted by Mods TeamKristenSite at 9:40 PM