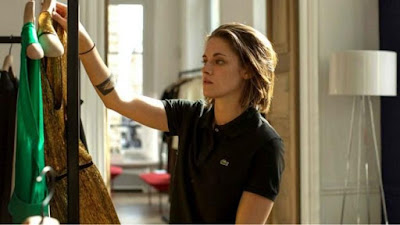 “With Olivier I learnt things about being female that were new to me, these ideas that can keep you up at night,” Stewart admits. “I’m less moored by anxiety than I was when I was 17 when I had my first debilitating existential thoughts. Sometimes you feel like there is no way out of it, but there is.”

Speaking at her usual rapid-fire pace and in her stream-of-consciousness manner, Stewart admits she’s changed. She’s less restrained and cares less about what people think of her.

“I have an awareness that lack of control leads people to a truer perception of you. I think I’ve really wished for that and found more of it in doing so. I’m not afraid. If I don't know the answer to something I just say, ‘I don't know’ instead of feeling obliged to give an answer. I’ve figured out how to communicate better. That obviously comes from just getting older.”

Does she meditate, given she’s been through so much?

“A lot of people have suggested meditation to me. I really have trouble sleeping and apparently it can be really helpful. But I’m not good at self-manipulation. I like feeling scattered, I really like feeling overwhelmed. Feeling relaxed all the time isn’t necessarily the way to feel creative. The only reason I have the ability to cope is because I’m quite f..king grounded.”

On screen she’s particularly courageous and nude scenes are not a problem. “There’s a strength in feeling stripped down in every sense,” she says. “I know as an actor I want to feel seen, I want to feel accepted and understood. The scene in Personal Shopper was exhilarating; it was not difficult to be naked. I'm not the most modest person, I'm not that precious and I don’t have the shame the character has.”

Stewart has learnt to deal with criticism too. “Not everyone’s going to like you. I prefer to feel love and hate rather than indifference. So I’m fine with it.”

Not everybody has loved Personal Shopper. Yet Stewart adores it. She loves working in Europe and she loves being away from the Hollywood controls. Still it was difficult.

“Olivier wanted to accelerate making the movie so I filmed it before Café Society. I was doing 16 hour days 7-day weeks and was working for Chanel at the same time, doing a photoshoot or flying to Rome for a show on Sundays. Oh man, I’ve never felt so good feeling so bad!”

She likewise put herself through the mill when filming her ambitious directing debut, the 17-minute short Come Swim that debuted in Sundance. “I’m a bit of a masochist. I don’t make things easy for myself.”

She is close to her dad and to her heavily tattooed mum who often dyes her hair jet black as Kristen had done earlier this year.

“My mum definitely carves her own way. The Aussies are very gregarious. I tend to be, I can be, but it’s more difficult for me to pull it out [of me]. I’m getting better at it.”

She reportedly lives between her house in the very cool Los Angeles suburb of Los Feliz and a Malibu beach pad she bought with her mum. She’s not publicising the locations.

“There are people who have driven up to my house and ogled. It’s f..king scary actually.”

"Everybody has an idea of who I am because of the reality show that all of us celebrities are by default involved with."

Social media is as much a hindrance as a help, though she loves to text. “I’m obsessed with formatting my messages and punctuating them perfectly and conveying something specifically. I have a private Instagram. Personally I have social media but I don't have a public anything.”

Of course it’s probably more difficult to be famous than it ever has been.

“Celebrities are so perforated, the holes are gaping. I think it’s really obvious that we’re breakable.”

Is that a good thing?

“Yeah actually I think it is-when it’s truthful and not just the whole tabloid thing. You have to focus on what really matters to you, as there’s a lot of bullshit in that world. You just have to look away.”

Source
Posted by Mods TeamKristenSite at 5:00 AM