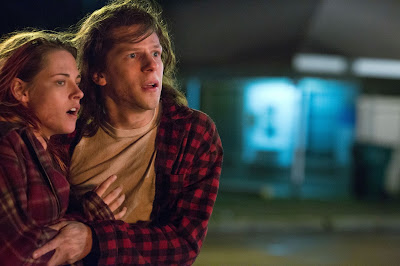 After starring in "Adventureland" in 2009, Kristen Stewart and Jesse Eisenberg are reunited in "American Ultra", a film that holds the line input of romance "indie" of their previous film together, but quickly turns to comedy action and becomes something very different.

"You think you will go in a completely different direction when suddenly (Jesse) kills three types with a spoon and we are attacked by the government," Stewart said in an interview with Efe.

"American Ultra", which opens on August 21 in the US, tells the story of a young man trapped in a small town where he spent the day smoking marijuana with his girlfriend and drawing comics without aspiration, and that he is suddenly haunted by the CIA.

What the protagonist does not know is that, really, he's was trained for years and whose memory has been deleted agent, but "reactivated" is still able to face an army.

Despite being a radically different film, Stewart and Eisenberg agree that "American Ultra" means to some extent a "continuation" of "Adventureland" nostalgic tape that gave life to a couple who is known to work during summer an amusement park.

"I think there is a line connecting Adventureland and this film. It could totally be a crazy spin-off, because we are the same kids," says Stewart.

The actress, who became known worldwide thanks to the success of the "Twilight" saga, first jump to the field of action, but does so in a film that, as highlighted, pay close attention to the characters and that fights and explosions mixed with humor and romance.

Stewart recalls that at the beginning of the project she spent two days locked in a room with fellow cast reading the script and deciding all the details of interpretation.

The result is a combination of humor, violence and very special characters reminiscent of some cult films.

"I think it's a film that can attract many people, but it is so unusual that I think audiences will feel as if something of yours," said Eisenberg ("The Social Network", "Zombieland") Efe.

Stewart Eisenberg and spend much of the film surprised by the action, almost wondering what is happening around them, a feeling that the two young performers often say in real life suffer because of the fame.

"We are exposed to such a massive response" that "is overwhelming and confusing and disorienting," explains Stewart, 25.

According to Eisenberg, working in Hollywood is easy to be misunderstood.

"Sometimes people write to us as if we were Gaddafi, as if we justify a public response, as I do in my personal life deserves zero attention. And what I do professionally, justifies a moderate response," he says.

After "Adventureland" and "American Ultra", the two actors are ready with their next encounter at the hands of Woody Allen.

They appear in the next draft of New York, which begins shooting this month in New York and Los Angeles, and they can hardly give details.

"It's like a Marvel film with so much secrecy" laughs Eisenberg, who worked with Allen in "To Rome With Love".

Stewart, who will debut with the prestigious director, says she has always been "fascinated by the mind responsible for all those films that speak and say so very much."

"My papers are always so quiet, always quiet people. I am very excited to be able to use my voice and work with it," she says.

Source Via
Posted by Mods TeamKristenSite at 12:46 PM