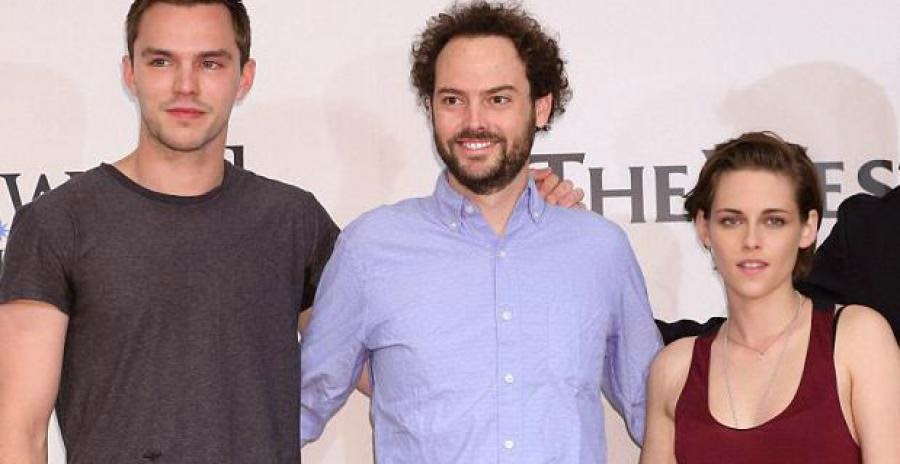 Extracts from the interview regarding 'Equals':

You’ve been doing a lot of cool work, especially in the last two or three years.  What has it been like for you winning the actors lottery?  Because you’re one of the few people who have really won the actor’s lottery in terms of different types of performances and the directors you get to work with.  What’s that like for you from the inside?

HOULT: I think you just – either it’s very cold in here or you gave me chills by saying that.

But it’s very true though.

HOULT: Because I do feel very lucky and fortunate whereby, even in this year or in the last twelve months, you can go from doing X-Men, which is a franchise I grew up watching I was a kid and suddenly you’re in the corridors of Cerebro with Hugh Jackman thinking how did this happen?  Then I can do a little indie film like Kill Your Friends, which is like this satire comedy playing another interesting character.  That’s the main thing, looking for interesting characters, good directors, and experiences where you’re growing and learning.  Yeah, I can do that, and go do an action car-chase film, and then go and do this last film I’ve just finished called Equals, which is one of the best experiences I’ve ever had on a film.  So you sit there and you’re just like…very lucky.  I love acting.

He has presence on screen and you buy into what he’s selling.  It just feels authentic when he’s doing stuff.  Let’s talk about Equals, because I love Drake’s work.  I think he’s a really talented director.  For people that don’t know, tell people what it’s about and the fact that you got to film all over the place.

HOULT: Yeah, we filmed all over Japan and Singapore.  You know from Drake’s work, he’s all about love stories, he’s all about connection, humans…just that, he’s all about that.  It’s honestly one of the best experiences I’ve ever had on a film.  I felt really inspired working with him and Kristen each day.  I’d sit down and I’d be like, “Wow.”  His style of filmmaking, I love.  There’s so much soul in it.  I’ve seen little clips of that film now and it evokes so much emotion and he evokes so much on set.  I felt as though – I haven’t seen it, I don’t know – but in terms of my acting, it felt like the best experience in terms of him guiding me and just wanting…it’s simple what he asks for.  He wants you to be vulnerable and he wants you to be honest.  He’s like, “You don’t have to portray anything.  Don’t say anything if it doesn’t feel real to you.  Just be honest.”  This is the first time he’s worked with a script, but there would also be a fair bit of improvisation and…yeah, sorry [laughs].

The film’s about this kind of futuristic world where humans destroyed the world, and then they’ve kind of made this collective where everyone works for space travel and all that stuff, but because human emotion was essentially what caused us to destroy the world, now when you’re kids you get genetically modified essentially so that you don’t feel and you don’t feel love.  You’re not like an autobot, you can still create and you can still work.  It’s all still there, but the soul’s kind of been taken out of you.  Then my character starts to see things in this world, it all starts to unravel around him, and he starts noticing Kristen Stewart’s character and he’s like, “Hang on a minute, there’s more here going on and I’m starting to feel things,” and then the movie takes off from there.

So basically the modification maybe has failed a little bit.

HOULT: Yeah, so basically there’s this thing called “SOS”, which is Switched On Syndrome, and it’s
a utopian world, but if you get this disease you’re taken to “the den”, which is this horrible place where essentially you end up dying and it’s all over.  Yeah, feeling is not what they do.  So then it was amazing because you’re playing this character who has never experienced or felt all these things before, so you’re doing all these things, which is kind of similar in some ways to the character I played in Warm Bodies where its that thing of awakening and then feeling too much, not being able to handle it, and wanting to try and get away from it – we’ve all been there.  You know what?  I just can’t wait for people to see that film.  I can’t wait to see it.

I can’t wait either.  Especially when it’s filmed around the world like that, because it adds so much production value to something when you’re filming on location in real places, and maybe places that are off the beaten path.

HOULT: Yeah, and it’s also the look of it.  The look of it and the music.  Drake created this thirty song playlist for me, which before going up to do the movie I’d listen to it pretty much every day and walk around and just hear this music.  On set I’d be playing it the whole time in my ears, and he’d play it on set as well for kind of the mute stuff where me and Kristen are doing scenes but the sound’s not going to be used, he’d have the music playing.  I called him Dream Flare, Dream Flare Doremus [laughs].  He loves a bit of flare in his movies.  It’s shot beautifully.

I would expect nothing less.  Whiplash was shot and wrapped in October and then they premiered at Sundance.  Has he mentioned to you that maybe he’s going to try or is it too soon?

Are you doing anything before X-Men or do you need to take some time to decompress and enjoy that buzz of Equals?

HOULT: Yeah, at the moment that was kind of a sign that I don’t want to work for a little bit.  It’s kind of changed what I want to do.  It’s changed my perspective on acting a fair bit.

You take it home with you.

HOULT: Yeah, which was nice to then go on to Equals.  Because it’s like this serene utopian world where you feel nothing.  They’re the perfect antidote to each other where they couldn’t be more different.  And then Kill Your Friends is this kind of music industry film in the ’90s where I play an A&R manager called Stephen Stelfox who’s basically driven by fear of everything and a bit of a psychopath.

Are you allowed to skateboard while you’re filming?  Because I have a friend who’s broken a few things.

[Laughs] Did you just turn white from nervousness?

HOULT: It was just one of those things where the disappointment was like reeking out of him and I was like, “Oh no, I was an idiot.  I’m sorry Drake.  The movie means more.”


Posted by Mods TeamKristenSite at 9:41 PM