Kristen's interview with Refinery 29 for 'Underwater' 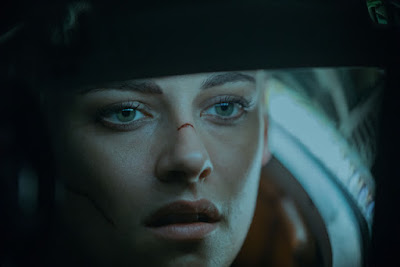 Refinery29: This is one of the most stressful movies I’ve seen recently, and that includes Uncut Gems.

Kristen Stewart: "Uncut Gems was very, very stressful in a very different way, but yeah, it's stressful as fuck."

What drew you to this particular movie?

“I hadn't made a big movie in a while, and I had seen The Signal, which was the director's first film. I knew that he was really young and didn't have much to put that movie together, and I thought that he made an astounding amount with what he had. Initially [the script] was roughly drawn. It was very foundational. The characters needed to be people. And I [wanted] to do something innate and physical, that dealt with people traipsing on things and kind of depleting resources and being where they shouldn't be, and repercussions of that all coming to a head in a pretty different survival movie that turned into a weird monster movie. I was just like, Look, if I'm going to do a big, commercial movie, that sounds like something that I'm into."

Did you get a lot of input over your character?

“I jumped on and basically came to New Orleans, and we worked with a couple of writers for a few days. It very much found itself kind of immersive and basic. As soon as we started really selling it with plotty type stuff, it just felt false because you start with people that don't really know each other and they're just trying to not die. If you start talking about anything else, it's like, Is this really the moment that you're going to be saying this shit? So, we just existed and tried to survive the actual experience of making the movie, and that's what it ended up being.”

I’ve always been afraid that I’d be in a bathing suit, or barefoot when disaster strikes. And that’s exactly what happens here!

“Exactly! I thought it was such a good idea to start a movie not knowing the person beyond that at all and just being like, 'Oh my God that could be me.’ I'm going to be in the shower, brushing my teeth and naked and fucked.”

Your character either wears sweatpants and a sports bra or a really heavy underwater suit. Did that make you feel vulnerable as an actor?

“The suits were one of the most —  and I'm not saying this to have something to talk about or be dramatic about a scenario in a movie. It was the hardest fucking thing I had done physically. I thought at some point that there was something seriously wrong with me, and I could have been maybe sick because my body was not working anymore. We barely survived this, and it is definitely not anything to brag about. It was stupid. The suits were too heavy. We couldn't do our jobs in our suits. It was fucking ridiculous. But initially, before we got into the suits, I did think it was a really good idea to keep her in sweats. We were going to do actual underwear, but then I just didn't want it to seem like I was being a weirdo and wanted to look naked in the movie. But, definitely kept barefoot, and in a sports bra and sweatpants. Absolutely, utterly unprepared to deal with what transpired.”

Were you actually underwater?

“Yes. There was one special suit that was actually able to go underwater, but it was horrible. They didn't work very well because you couldn't hear anything. The air sometimes didn't work, and then you'd have to say,  Hey you guys release the pressure or whatever. But they'd say, ‘What?’ And you're trying to make hand signals, but you have gloves on. I'm like, It takes 15 minutes to get out of the suit right now. My body will explode before 15 minutes is up. I don't know if you ever have experienced being claustrophobic —  there is no time.”

You directed a short film in 2017 called Come Swim that also has a lot of water imagery. What is it about water that you find compelling?

“I'm totally scared of water. It's sort of functioned in this beautiful narrative way in my life and has definitely become concurrent with other stories that I want to tell. It’s a through-line for sure. But in a literal sense, I definitely am not a strong swimmer, and I'm super claustrophobic. So my whole thing during this movie, I was like, ‘Don't be a pussy.’ At some point you have to try. You're not going to die doing this. But I was crying. When we weren't having to go in these submersible suits, which the other actors didn't find too harrowing. I had to take Xanax and only went in three times. And I am absolutely never, ever doing it again as long as I live.”

This interview has been edited and condensed for clarity.

“Underwater” is in theaters January 10.
Posted by Mods TeamKristenSite at 12:22 AM