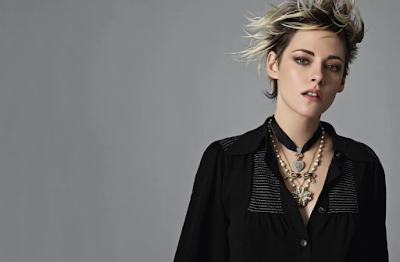 Kristen Stewart , face of the Chanel spring summer 2020 collection in the shots taken by Jean-Baptiste Mondino , talks about her relationship with the maison, the new creative direction of Virginie Viard and the experience on the set of the advertising campaign.

"The atmosphere of the images seems suspended like that moment when you jump in the air and you are without gravity," confessed the actress who, to make the shots, found herself using an elastic trampoline in front of the French photographer's lens. The campaign enhances the concept of lightness , intrinsic in the collection imagined by Virginie Viard on a walkway that reproduced the Parisian roofs inside the Grand Palais.

"The clothes seemed to be able to move, dance, run and breathe ... [the collection, ed.] It's a breath of fresh air, really modern and clearly designed from a female point of view." Kristen Stewart continued explaining the meaning of freedom expressed by the garments of the new Chanel spring summer 2020 collection. "It seemed to me that these clothes were made by someone who could wear them in turn. We really need to feel light, we have to feel like we can run like women now. And these clothes make it possible. "

In Mondino's shots, the actress wears some of the most emblematic looks in the collection. The pink taffeta suit (the same one sported by Kristen for the premiere of her latest film Seberg) : with the classic collarless jacket, edged with a glittering lurex and metal decoration, combined with the pleated skirt that opens freely to every movement. Or, the shorts suit : with a pointed collar, wide sleeves and fully exposed legs, to evoke the sense of movement. Movement further emphasized by Chanel jewels : metal necklaces and bracelets, rhinestones and glass pearls, together with the unmistakable camellia brooches in silk chiffon.

"Virginie is a person I admire and somehow followed for my personal growth," said Kristen Stewart. The two have known each other for some time, the actress worked with the maison for the first time in 2013 and has become an ambassador since 2015. "There is an originality and something unique that leads to every room in which it enters and I feel that his clothes do the same thing."

Speaking of the images of the new Chanel campaign starring her, Stewart commented: "It does not seem tried or executed, they really seem lived and without having lost elegance or elevation. It makes sense that it was Virginie's inspiration because it seems impulsive and sporadic and honest and colorful and vivid."

Source
Posted by Mods TeamKristenSite at 12:06 AM