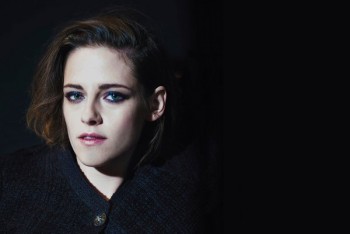 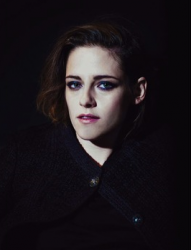 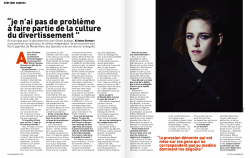 
Filming for the second time with Olivier Assayas, Kristen Stewart talks about her taste for indie, her meeting with Karl Lagerfeld, Woody Allen, The Specials and her right to be ambiguous.


After 'Sils Maria', you're currently filming 'Personal Shopper', Olivier Assayas's new movie. What can you tell us about your character?

Kristen: I'm literally killing myself for this film, my back is broken. I'm 100% involved. I did not realize how deep and existential it was, and how much it moves me. I play a very very very lonely girl, who isn't sure of who she is. Her twin brother died. And she has an obsession: get in contact with him. At the same time, she's a shopper for this woman who is a public figure and embodies a very superficial way of life. This is a film about reality, about what is real. Does all we feel is real? What we rely on?

You works in Paris for this movie. Were you there the night of the attacks?

Kristen: No, in Prague, we left Paris forty-eight hours before. We were all together, we were having a good night and very quickly news were coming on phones. We had to shoot the next day, it seemed completely absurd. To play, to tell a story, you have to fully be in what you do. In a situation like this, it's complicated. All the crew was French, chocked, and constantly on the phone. I find it very difficult to talk about this kind of event. We touch the inconceivable, the unthinkable. We are a generation who never knew the war, it is not part of our daily lives, and neither is this kind of violence. It's stuff we usually read in newspapers. The intensity of the shock we feel proves that we have no idea what this is. For a large part of humanity that lives in a country being in war, it's not a shock, it's just everyday reality.

Would you say that Sils Maria was a turning point in your career, in your way to position you as an actress?

Kristen: I have the feeling that Olivier has really chosen me - well chosen - for these two movies. The cast really makes sense, he didn't called me because he thinks I'm nice and cool. He took me with everything I am and what I represent in the cinema world. 'Sils Maria' was very meta, he plays with that. People have any desire at all to know how it's sometimes difficult to be an actress, to deal with superficiality, business, celebrity.

'Sils Maria' was like a shelter, a safe place where I can say things I don't have the right to tell without looking like a thankless. I've also discovered with him the possible difference between majority of American directors and a French director like him. In France, you know that without risk, without endangering, there is no real artistic work. The cinephilia we don't have in the US also makes all the difference. Money, recognition from critics are important but secondary. And all this conforted me in what I was looking for and gave me confidence.

You're one of Chanel's muses. You've just presented 'Once and Forever' in Rome, Karl Lagerfeld's latest short film in which you play a young Coco alongside Jérémie Elkaïm and Geraldine Chaplin. Do you feel comfortable in the fashion world?

Kristen: Depends on people I meet. I believe in its creative part, I like it. The way people can be attracted to this world, this, can be disgusting. I enjoy the company of Karl. He's a living encyclopedia. He wants to pass on to younger generations around him. He could have a huge ego - and he may have one - but I find it great that he's in this position. Inspiration is really what he's obsessed about, leading him to create what he creates. He loves movies, I think he could have been director in another life. I love learning from directors I work with.

What did learnt from Woody Allen with who you just shot?

[She thought for a long time]

Kristen: His writing. It's precise, virtuoso. He has his own language. When he speaks, it's a mix of humor and assumed arrogance. Annie Hall remains my favorite Woody.

Which directors that matter to you?

Kristen: Martin Scorsese. He is capable of making big movies killing it. In France, I love Jacques Audiard. A Prophet transported me.. I would kill to work with him. I also really like Andrea Arnold. I love Fish Tank. This year, I loved Mustang, Deniz Gamze Erguven's movie.

Could you play a James Bond girl?

You said that you didn't want to define yourself, that you are an ambiguity. Do you believe in gender fluidity?

Kristen: Totally! The insane and absurd pressure put on people who don't fit the dominant model disgusts me. I find this desire for control, archaic and creepy. I'm lucky, I live in Los Angeles, I grew up in West Hollywood, my parents are open-minded people who always encouraged me to be free, I work in movies. I know it's not as easy for everyone.

You're under a constant attention. You're scrutinized, we can see you with your boys and girls on Instagram..

Kristen: Yes, but I don't care. That said, I think things are changing among the younger generations. I'm sure if I have kids they won't understand why there could a problem. When I was a kid, difference was problematic. It was common to hear, "Oh, you're gay, you're weird, oh you look like a guy." And maybe yes, maybe no, it depends on who I'm going out with right now.

What are you listening at the moment?

Kristen: I don't know what happens to me, I fell back in Oasis. I'm crazy about Bon Iver, and his new group, Volcano Choir. It's faster and less folk than what he was doing when he was solo. And otherwise, The Specials. I'd love to love electronic music. But I can't. The thing that drives me crazy, when I want to dance, it's ska.

Kristen is in the Les Inrockuptibles' December 9 issue. You can download or read it here.

Source/Via Translation & scan thanks to: itsoktobeyou.org
Posted by Mods TeamKristenSite at 2:34 PM