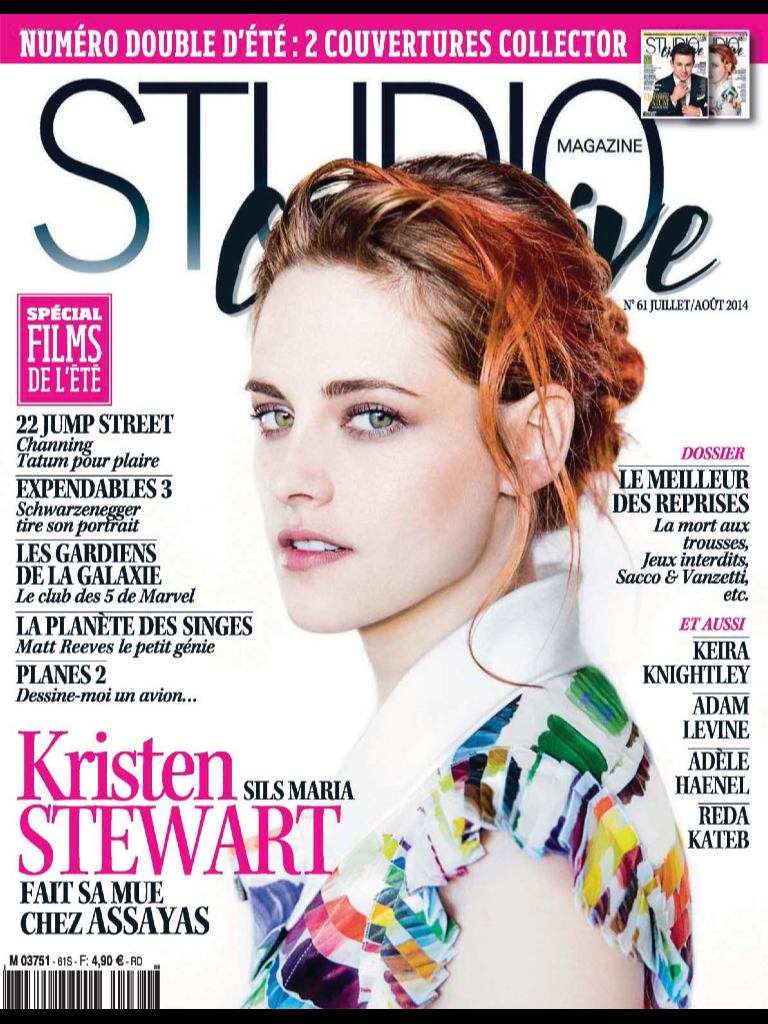 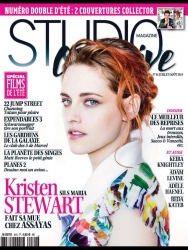 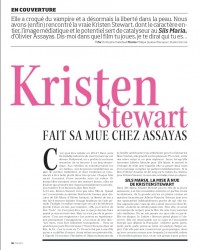 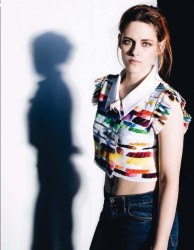 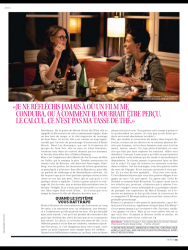 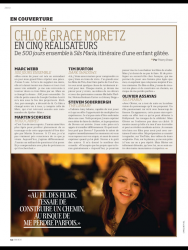 The issue will be available on newstands on Wednesday 16 July in France.


She has bitten vampires and is now free in her own skin. We (finally) got the chance to meet the real Kristen Stewart, whose whole character, media persona and potiental is the catalyst in 'Sils Maria' by Olivier Assayas. Tell me in which film you act, I will tell you who you are...

Kristen Stewart goes through a metamorphosis with Assayas.

What does it mean to be a rebel in 2014? In this amazing formated industry that Hollywood turned into, we sometimes have the strange feeling of hitting a semantic bug. The rebels are substitutes for "beautiful again" (The pun only works in French), as in, young actresses who have their careers all mapped out, and whose ambition is mainly to be pretty. Each film is a chance to be on the forefront. And when they decide to step out of their comfort zone, they only do things already prepared beforehand, like a well-managed business.

At 24, Kristen Stewart is not that girl. When we met her at the last Cannes Film Festival to talk about 'Sils Maria' by Olivier Assayas, her way of speaking freely quickly destroyed that impression of her being a moody teenager from the Twilight era as well as that idea of her being a stuck-up person, which she in fact, isn't. "Okay, I do happen to say 'Fuck' sometimes during interviews. It might not be something I should do when I'm being interviewed but it's not a provocation. It's like breathing." Actors who are always showing off piss her off. "I want to tell them: 'Guys, you're so transparent... Can you not just be normal? You're not in a movie. Here, it's real life!" You can't pretend with a girl who has seen her fair share of fake people. Even before her first role, at the age of 10 in 'The Safety of Objects' (Ambitious dissection of a wealthy American family by the director Rose Troche), she grows up on sets, between her mother, a screenwriter and her father, an assistant director. Also, when she meets Juliette Binoche for 'Sils Maria', the natural and the energy of the woman she's going to spent two months filming and forming a tight bond speaks to her immediately. If Olivier Assayas' film tells a lot of things about the world of cinema, for Kristen Stewart, it is a real mise en abyme.

SILS MARIA, A METAMORPHOSIS FOR KRISTEN STEWART
In 'Sils Maria', Kristen Stewart plays the role of the young assistant, at once, an attentive adivser and sometimes an involuntary rival of the big actress who is putting everything into question played by Juliette Binoche. Stewart plays with an undeniable spontaneity, close to who she is. An approach more real that she enjoyed finding again in Binoche. "Juliette is never faking anything. For her, it would be a lack of respect for the film. In that way, we're very similar. You never know where's she going to go.. She's crazy, I love her." Stewart takes pleasure in watching her. She's inexhaustible on the matter and the amazing energy that is shown by the French actress. "Juliette always speaks, speaks, speaks, speaks, speaks, thinks about the text while analyzing every aspect. Then she manages to put everything into practice, while with other actors I've worked with, even if they take everything in, you never feel like they got anything out of it during filming. Whereas Juliette is very much the cerebral type, while she's capable of processing the whole preparation. Generally, it's two way of doing things that don't go well together. Personally, I don't rehearse my lines. I only read them again ten minutes before shooting a scene. I feel like if I knew them by heart, it would take away the experience that I would get from the scene.

HOW WE PERCEIVE HER.
On top of the particular relationship that unite Binoche and Stewart in 'Sils Maria', there's also a last woman role, that puts into light the common perception that the public can have of her. The young Chloë Moretz that Assayas didn't cast for no reason, plays Jo-Ann Ellis, a rising star in Hollywood, star of blockbusters and tabloids, who jumps at the opportunity of working with the big actress, played by Binoche, to turn her career in a new direction. At the turning point of a debating scene in which we see Jo-Ann play a mutant, Kristen Stewart tries to convince Juliette Binoche of the value of this interpretation. Roughly, Jo-Ann might play a mutant but she still has to compose with a big range of human emotions. A speech that Stewart could have also told to defend her iconic role of Bella, the girl in love with vampires.

At this idea, a smile lights up her face. "You are absolutely right. Playing a vampire or a mutant might be a convention, but it's not more stupid than any other convention. I know that there's a habit of looking down at blockbusters. Those that I did, I didn't do them because of the reasons people might think of. I didn't do them because they could have helped my career or because I wanted to become a big star of cinema. I really loved those stories. When I signed on for the first 'Twilight', I was completely OBSESSED! I'm American, I've been surrounded by blockbusters. I love them. But I still want them to mean something."

ON THE ROAD TO HER DESIRES
Hollywood loves to put people into categories. Stewart knows it, accepts it, even if "No one wants to be put into boxes. Evidently, it's annoying to always be perceived as the girl from 'Twilight', but it's what I was when I signed on to do this saga." As long as her vampiric adventure was (Five films during five years), the career of Stewart isn't summarized by a saga of Fascination - Tentation - Hesitation - Revelation. (French names of the Twilight Saga books)

Translation of page 1 and 2. Page 3 of the interview is to be translated. We will post it here when available.

Posted by Mods TeamKristenSite at 3:06 AM