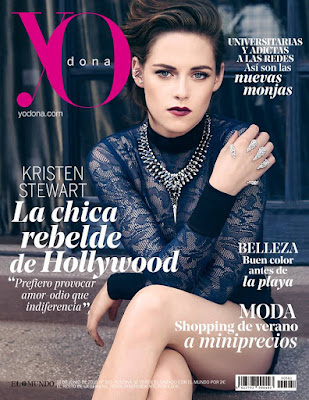 Kristen Stewart, rebel with a cause

...She has been described as shy in the most condescending media, and secretive and morose in questioning, but she has defended herself in very reasonable terms: "Anyone who can perceive me as cautious is usually in the context of a fleeting and superficial interview. That means nothing to me. But really, I'm dying all the time to reveal myself as an actress and as a person, for putting myself in the clear." During her promotion at the Cannes Film Festival for 'Personal Shopper', she lived up to her words with a display of candor and eloquence. When she has time to expound and questions that do not lash out against her private life, the actress 26, does not give monosyllabic or evasive answers, but pauses to reflect each answer.

Now that you've played a 'personal shopper', has it changed your view on this as usual job in your circle?

I know how is the work of stylists. A good professional in this area is one who knows you and knows perfectly underline your personality, give you strength and make you feel good. I have worked with the same hair stylist (Tara Swennen) since I was 12 years old. It may sound frivolous and cliché, but I love our collaboration. There is nothing wrong with that, I have fun. Actors can not track down the best clothes. They just don't have that time.

What criteria do you base your outfits on the red carpet?

I choose attire that usually has to do with movies, it's like a reading of the characters, a continuation of the story, a footnote on page. For the premiere at the Cannes Film Festival 'Personal Shopper', for example, it was all white because I wanted to feel pure, young and exposed. I'm normally not seen in very commercialized clothes, but because of how dark this movie I wanted to bring some innocence.

In fact, the filming coincided with the Jihadist attacks in Paris last November. How did it affect the team, who were mainly French?

We had already finished filming in Paris and we were in Prague. We were having drinks and people began to receive messages and just stayed in horror. It was very strange shooting a movie under those circumstances, but Olivier brought us all together to encourage us to continue, and I really do not feel it was a selfish motivation, but we had some perseverance. Not to sound pretentious, because it would be grotesque, but I love the fact we had filmed in Paris before the attacks. We would not  have been able to shoot on the Metro or in many of the places we filmed, and who knows when we may have returned to work normally. I hate to say it, but we were very fortunate.

'Personal Shopper' was booed at the Cannes press screening and yet, Olivier Assayas earned the award for best director. How do you tackle the bad reviews?

You can't like everyone, but I prefer to awaken love-hate reactions rather than the mediocrity of neutrality or indifference.

Am I wrong to say that you now care less than at the beginning what people think of you?

I still worry, but I have noticed that the lack of control makes the public perception of me is more real. So now, for example, when someone asks me something I do not know, I simply reply "I do not know", instead of feeling compelled to give an answer that I don't have. I no longer feel afraid. Currently I strive to communicate better, and that involves just getting older.

Speaking of communication, in the film has a strong presence of mobile phone use, what does this 'gadget' in your life?

I love sending messages, it's very of my generation. But with most people, there is much lack of communication in the way we relate. More than one personal has asked me: "Pick up the phone and call me." And while this new form of language may not be as suitable as a face to face conversation it has its advantages and peculiarities. In my case, I'm obsessed with taking care of my messages, rate it perfectly and specifically expressing what I want. I like to take the time to do that and it's something you can not afford do if you're facing someone. However, I am not an addict. I have no social networks, except for a private Instagram account.

What is your 'emoji' favorite?

Let's see which comes first [picks up the phone and takes a few seconds to review her whatsapp] ...
It is the broken heart, I use it whenever I grieve, but above all, always with something that I love.

Why was it so hard to shoot [Personal Shopper]?

The film is relentless. I did recreate the debilitating anxiety that I had suffered for 17 years. At that age I suffered my first dose of existential thoughts and began to isolate myself, but then I learned to find a balance, to find joy in distractions, because you'll never be able to answer the question of where we go from here. My mind told me to 'fast forward' the character of Maureen, because although there are people who suffer this grief for years, a light at the end of the tunnel is in sight and I know from experience that the anxiety is very temporary. You have to focus on other things and not let that anxiety paralyze you. It's hard, I can identify, and although sometimes I think there isn't, there is actually a way out.

You have gone through a lot of unpleasant situations. How do you disconnect from it?

Many people have suggested to me meditation, because I don't sleep. I have trouble sleeping and apparently that's helpful. I have to try. But I'm not very good at self-manipulation. I love feeling overwhelmed, because good things are always born from that situation. Being relaxed all the time is not the best way to be creative.

In this regard, in recent times you have alternated Hollywood blockbusters with European arthouse cinema. Which feeds your creativity more?

I have no predesigned plan. The turning point was filming 'On the Road' (Walter Salles, 2012), because it was then that I met the producer Charles Gilbert. I basically found my older brother. I have been given incredible opportunities for work. He introduced me to Olivier [Assayas] and it was my first step to the notion that cinema means to take risks. Charles compares his motivation to make films with the first man on the moon, an unknown place, dangerous. That is the raison d'etre* of cinema in Europe. The industry in the US, however, refuses to commit to projects that are not guaranteed to be an instant success. There are always expectations, and I prefer to feel insecure. This is the position from which I want to explore my career.

Do you feel less observed in Europe?

Socially yes. Normal people are not that interested in wanting to know who I am. But the paparazzi are sometimes worse, because there is so much celebrity presence in Paris and London as it is in Los Angeles and New York, so when they do find me, they're ferocious.

Can you still go somewhere where you can go unnoticed?

In Los Angeles, literally, everyone is looking over your shoulder if they see someone they know, but in New York people move too fast to notice you or, if they do, they're more concerned about doing what they need to do. It's different in every city. But I haven't found a place yet where I'm unnoticed.

We transcribed the translation by @queennn94 - thank you for it.

*Raison d'être is a French expression commonly used in English, meaning "reason for being" or "reason to be".