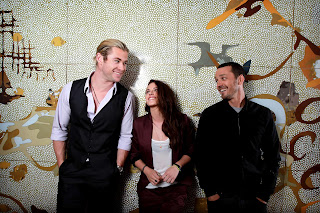 ”She’s been imprisoned by Twilight and this is her breakout,” says Rupert Sanders, the British director making his first feature with Snow White and the Huntsman. ”Kristen’s very talented and she’s got a huge career ahead of her where she will constantly surprise people.”


As one of the few successful child actors to transition without a hitch into adult roles, Stewart feels like a familiar screen fixture despite being merely 22 years old. She was just 17 when she was cast as Bella Swan, the chaste teenage girl who falls in love with Robert Pattinson’s brooding vampire in 2008′s Twilight. That overwrought franchise finally ends this November, and it appears that while she’s grateful for the exposure, Stewart is ready for the next phase of her career.


‘I’m not trying to distance myself from Twilight, but there are several films coming out this year that are going to compound the sense of change,” Stewart says. ”I’ve done things that are far and away from anything I could imagine, and right now I’m bursting with emotions and questions.’


‘Our take on the whole idea of a fairytale is very elemental,” says Sanders, a graduate of television commercials, who delivered the film on a painfully tight schedule to meet the studio’s pre-ordained release date. ”But the fact that we’ve got two strong women playing masculine roles is very modern, and that’s part of what excited me.’

‘I think that the reason the story has never been irrelevant is that it’s so fundamental: you have to have heart,” Stewart says. ”I’ve met so many people who’ve become so ugly, people that I thought were really beautiful, because they don’t come from anywhere apart from the purely superficial. What they do doesn’t work and it doesn’t move you. Women can see that, and they can sense it.’


‘Sometimes you have qualities that you don’t know about until you meet someone, or read something, or hear about a story and you realise, ‘Wow, that’s scary and it speaks to me, I should do that,”’ Stewart says. ”Rupert presented a world I wanted to live in and so I believed in the cause.’


‘I love close-ups,” she says. ”I’ve never done theatre and although I started at a young age, I was never the kid in the middle of the room. I was never a performer. When there’s a camera in my face there’s just no going back, there’s no excuse. It’s better for me because as soon as you pull the camera back there are one hundred walls I can get behind. With a close-up, you can’t hide.’


Read the full article here Via @kstewartnews
Thank you!
Posted by Mods TeamKristenSite at 5:01 PM

Email ThisBlogThis!Share to TwitterShare to FacebookShare to Pinterest
Labels: article, interview, Snow White and the Huntsman