Kristen's interview with IO Donna at the Zurich Film Festival 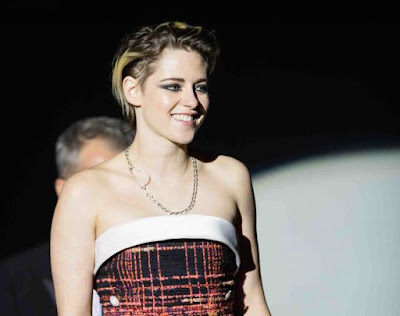 Twilight celebrated ten years. Do you want to share a memory of the saga?
Impossible: my mind has forfeited too many to choose one. I made five films and it was like going to high school. How do you choose a high school moment?

Do you still feel Robert Pattinson?
Of course, Rob is crazy and I am proud of how his career is going and very happy that he was chosen as Batman.

And the other cast members?
We don't have a Whatsapp chat, it would be crazy, but I always like to see them again. With Taylor Lautner, for example, from time to time we meet in New York.

Stephenie Meyer's vegetarian vampires changed her life. Did you expect it?
The books were famous, of course, but they hadn't entered the pop culture yet. I approached the script as one of many, it seemed interesting to me and I tried it in a natural way ... until obviously everything stopped being "normal".

What is your relationship with Bella?
History is seen from its perspective so it is such an immersive experience that you make it your own, in a visceral way. At the time I was little more than an adolescent myself and I understood what he felt, his confusion, his first sexual impulses, the awakening of your body and also the judgment of the people who tell you that all this is wrong but you believe it anyway.

Today you have a different awareness on the set, don't you?
I always have the usual bitch, full of anxiety and trepidation, even though now I trust my abilities more and try to put myself in the perfect conditions to get a certain result.

And before that?
I tortured myself, I created absurd pressures and expectations. Today I may be more relaxed so I will probably live longer as stress shortens life.

She has been acting since she was a child, obviously she likes the pressure of the set ...
In reality the mere idea of ​​getting on a stage as a child sent me into the ball, I was very shy and insecure but I watched so many movies at home. My parents worked in the sector, father as an assistant director and mother to review the scripts, so on the sets I wanted to give my contribution. I soon realized that a child could only act and I did.

It does not seem the sacred fire of your art, is it so?
More than anything, I was looking for an excuse not to go to school ... and I found it in acting.

She started with Panic Room. What kind of woman was Jodie Foster?
One that inspires terror. I didn't meet her right away. I did two weeks of rehearsals with Nicole Kidman and then on filming, Jodie arrived on the set. For me it was natural to feel like his daughter, she was crazy and I spent time looking at how she behaved.

How?
She was the first movie star I had ever worked with, a professional who loves teamwork and who taught me how to behave. I admire his integrity and also the fun side of his character.

She doesn't look like a naughty girl though.
In fact they are not. In my career I have made many dramatic films but fortunately that crazy crazy girl of Elizabeth Banks has understood that in me there is a comic and funny side, rather clumsy. He told me he wanted to bring Charlie's Angels back to life and I jumped on the project not just because I'm a fan of him but because he had the crazy idea to think of me for a role.

What should you expect from the film, which will arrive in Italy in January?
The story does not turn to superhero skills but focuses on female solidarity, on smart women but in a bit kitsch and over the top. My character has a protective instinct towards others and is one of those people who would take a bullet for others. It's a little insane but it will be hilarious.

On the opposite side of the spectrum of his works are the two films with Assayas. Would you go back to working together?
Immediately. He is so unpredictable ... in short, a madman, a genius, the best. His abilities overwhelm me mainly because it seems that the stories flow in him unconsciously, almost religiously. He has no ego, he speaks very little, and together we look like a pair of weirdoes, each in his own way. On the set he leaves you all the time you want, he doesn't plan everything and yet he always gets what he wants.

How did you get the diva Jean Seberg instead?
Merit of Cate Blanchett: during the days of jurors at the Cannes Film Festival she told me about the director Benedict Andrews and so I did not miss this opportunity. He is so protective of this icon and so methodical that he intrigued me.

What did you find out about her?
At first she has an energy and a brightness that are extinguished in her, almost suffocated, which intimidated me a lot. The fact that his activism led him to the FBI target and then to a premature death struck me greatly.

She also experienced an invasion of massive privacy, albeit differently from her. Has he lost faith in humanity?
Absolutely not, I always remain an incurable idealist who chases the heart of stories to be able to tell them honestly.

One last curiosity: who makes the tattoos?
I'm a bit of a fucking image, let's face it, because I don't go to famous or experienced tattoo artists, but I decide on the moment, taken by instinct and suddenly and the result is this, but I'm fond of it now and that's okay.