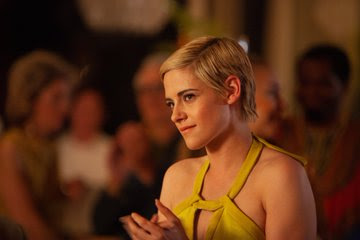 A collective pause in front of the door: Kristen Stewart appears, slips into the salon, sits down at a small table, a crack in the door remains open. Beauty specialists are starting to work on their hair and lips. Then I am asked to come back in. I start the tape recorder and Stewart asks if she can pour me a glass of water. "Thank you!" - "You're welcome!" She bobs her crossed leg, a kind of metronome that won't rest for the next 15 minutes.

You have already been to Switzerland to film - in 2014 for "The Clouds of Sils Maria" . What do you remember?

Well, we were shooting in the mountains, I felt very isolated. My impressions were therefore primarily nature and Juliette Binoche, so very strong impressions. (laughs) We were “in the middle of nowhere”, but it was fantastic.

It is said that you wanted to go shopping at the time, but you were told that it was not possible.

Uh, I don't know what you mean ... wait a minute! That's because all your shops in Switzerland are closed on Sundays, right? Well, that leads to certain frustrations among Americans.

You are the only American actress to date to win a French César for “The Clouds” . What does that mean to you?

I am honored by the award, but I couldn't say that my knowledge of European cinema is particularly great. I am fascinated by the philosophy behind these films, the cultural aspects, and I am attracted by this certain complacency in Europe, where one can and wants to assert oneself detached from the entertainment and film industry constraints.

Yeah, although I think if you use commercial films for your own benefit, it's some of the coolest shit you can do. However, my personal favorites are American independent films.

Speaking of which: Before you became a star with “Twilight”, you played alongside Eddie Redmayne, who was also unknown at the time, in the road movie “The Yellow Handkerchief”, produced by Swiss Arthur Cohn. How important was the film to your career?

Oh, I haven't thought about that in a long time. There was a time when I was making one film after the other, small pebble-like works that also featured Robert De Niro or Sean Penn and which, with a little luck, ran at the Sundance Festival. When I think of “The Yellow Handkerchief”, it's a time when I haven't had to answer any questions about the trajectory of my career. I just made films and saw what happened. I'm still trying to do that today.

But today you are a star. And, like Jean Seberg back then, you rarely mince your words. How do you protect yourself from being hunted?

Jean Seberg was attacked in a very special way, which was unusual at the time. For comparison: The way we watch each other nowadays I sometimes find glaring, but I've never seen a car chase like the one Seberg endured by the FBI - it was abusive and illegal. I myself am not afraid of being as lost as Seberg at the end of her life. On the other hand, I'm afraid that you can run to ruin much faster today than back in the sixties.

Is that why you are not present on social media?

Let's put it this way: I'm happy that I can share my life with others by making films. It is a big playground to express myself and I reveal the most intimate details of my existence there. I don't need Twitter or Facebook, but I understand that this is important for other people to communicate with.

Would you rather live in your sixties if you could?

No. It is a privilege to live in a modern age and to communicate with modern means. For example, it is possible to look through all kinds of lies and name them as such. Jean Seberg did not have these options, because everything happened in hiding back then. There was a deceptive calm, which ultimately led to her freaking out, leaving her country and never coming back.

Would you never leave your country?

No, I don't want to be an ex-patriot. I still believe we have a chance in the US.

Jean Seberg also believed in a chance. What do you have in common with her?

She was so tangible in everything she did. That made it easy to empathize with her. It was more difficult that I hardly had any sources available, there are almost no private video recordings. So I didn't know how she would enter a room when she was completely casual. In that sense, the film is an imaginary idea of ​​what it might have felt like to be Jean Seberg. There is no way of really knowing them.

Can you describe how you got Seberg's liveliness in the film?

Well, it's always a mix of fear and adrenaline that drives me in roles like this. If I'm supposed to impersonate someone like Seberg, I first think it's definitely not me. And in contrast to her, I have a rather deep voice.

Then director Benedict Andrews advised me to speak an octave higher. That helped me. In addition, I admire Seberg for her generous, uncompromising manner.

What does this have to do with your role?

I prefer to think twice before I say anything. Jean Seberg was the exact opposite. She was so incredibly open. But when I finally get on set, I have to push all those thoughts away to get into the role. If it works, if I can combine things that are both familiar and completely alien to me, then at first it is scary. But then it feels great.

Source
Posted by Mods TeamKristenSite at 12:43 AM

In lockdown in LA due to COVID-19 with 'Happiest Season' to be released in the US on Hulu on 25 November.