Kristen on the cover of Les Inrockuptibles +Interview 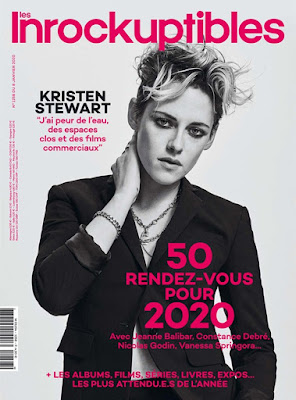 You have repeatedly stated that you do not like swimming, not being comfortable in the water. Yet you have agreed to star in a film that takes place entirely in the seabed. Is this a way to exorcise your fear?

Oddly enough, not being comfortable in the water probably led me to be a good - at least not too bad - swimmer. To be able to get out quickly if needed (laughs)! But yes, joke aside, I'm afraid of the water, its weight, its darkness, the difficulty of moving there, whether you're a good swimmer or a bad swimmer for that matter. I'm a control freak, and in the water I lose control...

More specifically, it was the path of the character that interested me here. The fact of starting in my underwear, brushing my teeth, oblivious to the imminent danger - in short, to start with a virgin character, of which we know absolutely nothing, and on which, for a long time, we will know nothing. It's something I like.

It changes from the classic set-ups, where after ten pages you have to learn this, then this, etc. We are dealing with someone who struggles to exist, who seems inaccessible, inexpressive, lonely, hard...

As if she were in a caricature of a macho hero. Then, Nora will thicken, we will understand that she is in mourning, that she protects herself from the world. But when the world attacks her for good, and her life is going to be threatened, she will realize that it is still worth living.

It's also your most commercial film in a long time. Was there a particular attraction to this, to get back on track in the Hollywood industry?

Indeed, I had not accepted such a film for a long time, and I felt pressure. Not at all in the sense that someone would have said to me, "You have to make this film", but simply because it was a necessity. To be able to continue to do what I want, I have to be visible, that's the way it is.

So I looked at what was available on the market, and I found this scenario, which immediately seduced me by its simplicity. He is not trying to do too much. It focuses on one idea, one idea: survive and relive. Today, in the studio system, it's almost impossible to do complicated stuff. We're in danger of losing on all counts. So it's better to have a simple idea and a perfect execution.

In addition to its commercial side, Underwater is also an action film. With Charlie's Angels, you've just done two in a row, whereas it's a genre you haven't touched much on so far. Do you find it specially pleasing? Would you say it's empowering?

Actually, I didn't do Underwater and Charlie's Angels one after the other, but you know how random these damn release schedules can be... In between, I shot Seberg (a portrait of the actress Jean Seberg, unpublished in France but presented at the last Deauville Festival), and I even had a lot of free time, which allowed me to write a personal project... (she's thinking)

I've never made a tactical career choice based on people's image of me. I sail on instinct. For Charlie, I wanted to feel free, comfortable, to support women who supported me in return. And it had something empowering indeed, especially since we constantly laughed during the manufacture.

Underwater, as I said, I did it to exorcise my fear of water, confined spaces and commercial movies (laughs)! And then the director, William Eubank, was able to convince me.

He's a young guy, almost a kid, who's only made one movie before, super-inventive, with very little means, The Signal. I didn't see myself doing a licked thriller with a confident old director. It amused me a lot more to try an adventure, to take a risk.

Underwater is quite clear about James Cameron's films, including Abyss and Alien, and your character is very similar to Sigourney Weaver's Ripley. Was it an inspiration? Is that something you discussed with the director?

I haven't seen these films specifically, but it's undeniable that it was part of the general inspiration. We both love these movies. And our movie loves these movies.

The comparison with Ripley does not seem innocent to me, since in Underwater, as in the Alien saga, we are dealing with a female character who is worth something other than his sexual attributes. Now, you said that you are tired of Hollywood systematically portraying women as sexual objects...

Not quite: what I said was that Hollywood had to start portraying women as sexual beings, in the sense of subjects in control of their sexuality. I am not at all against sexuality in cinema, as long as it is honest and whole, as long as it is not there to satisfy some kind of rotten social status quo, or titillate the average American viewer.

Politically, It seems interesting to me to be able to tell stories with non-sexual women, OK. But I like stories with people who are alive — or in this case come back to life —people who sometimes make bad choices but who live. Nora is someone who has cut himself off from everything, including her sexuality.

She literally buried herself. And it's still a fucking problem, isn't it? When you see her, you think, "Meuf, but where are you? What the hell are you doing?" There is something sad about her lack of sexuality, a sign of disengagement from the world.

Have you seen Celine Sciamma's Portrait of the Girl on Fire?

Yes! What a movie! I loved it! I've seen all of Celine Sciamma's films, she's so good. And those of Adele Haenel too, I like her very much.

Have you followed Adèle Haenel's recent statements in the French press about abuse she claimed to have been the victim of by director Christophe Ruggia?

I don't think I've heard of it, no... (we brief it) Wow! Look, I agree a thousand times with her. Denouncing a system rather than overpowering a monster, it seems to me the right approach. We're all fucked up in a way... What would be a better word than fucked up? Let's say, lost. The impulses, the weird stuff that is considered illegal... We all do.

The challenge is to know how to measure them, and above all to ensure that they are not imposed on others to ruin their lives or reduce their freedom. Keep your neuroses to yourself, damn it! So, attacking the system rather than the individuals, however lost they may be, is the right way to proceed, Adele is right.

More and more actresses are behind the camera: Greta Gerwig, Elizabeth Banks (director of Charlie's Angels), Clea DuVall (with whom you have a film in the pipeline, Happiest Season)... You yourself have a movie in the pipeline. Is this a way to regain power?

I can only speak for myself, but I've always wanted to tell stories since I was a kid. Want to leave something that belongs only to me. I think it's common to a lot of actors. But for me to feel legitimate, I had to be shown the way. I had to be revealed to myself.

When one is on this path, comes very quickly the desire to reveal other people to themselves. It's like they've opened my faucet and now I only want to open all the taps in the house!

What's the state of your film project, The Chronology of Water?

I promised myself I would do it next year. This is an autobiography of Lidia Yuknavitch very complicated to adapt. Because it's fluid, weird. It's like water: hard to catch. I have to find the perfect actress for the lead role (that of a professional swimmer, bisexual and sex addict, who becomes an artist). The story takes place over forty years, so, in reality, I need more than one actress...

Oh no (laughs)! Before I get down to it, I have to shoot Clea DuVall's film (a lesbian romantic comedy starring Mackenzie Davis) and Ben Foster's film (about William S. Burroughs, where she will play Joan Vollmer, the most prominent woman in Beat Generation). But normally, at the end of spring, I'll be free. If we see each other in a year and I still haven't shot, I'll be hyper-frustrated!

Going back to your metaphor on open taps, do you think Olivier Assayas could have done this for you?

Yes. As a future director, he unlocked me, clearly. As an actress, it's different: I just have to follow him. All I have to do is be human, to blend into the mould he creates. It's incredibly natural, and I love it. He's very funny, Olivier you know, because he never takes credit. He says things like (she starts imitating him).

"Oh, I don't know how it happened, I just wrote stuff, filmed it and that was it." What he taught me is that when you have something in you, it flows naturally; and if not, don't do it. Not that making movies is easy, but the urge must be compulsive.

Olivier is like my big brother, every time I see him, it's more than a joy, it's a relief. I sent him my script to find out what he thought. And he said, "You're not there yet, but the fact that you're making such a movie, and then another, it's fine, you're on the right track."

How lucky to have such a mentor! I still have a fucking chance, don't I?

Please credit Team Kristen Site (interview was purchased). Thank you.
Posted by Mods TeamKristenSite at 3:22 AM