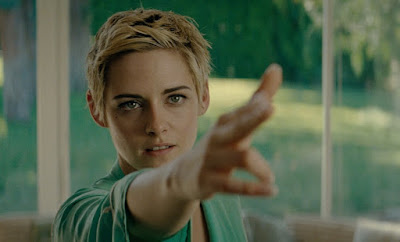 Tribute evening in her presence on September 13th, followed by the French premiere of Benedict Andrews’ Seberg.

She’s not even 30 years old, but already has a 20-year career behind her. Her unpredictable and stimulating filmography, from a globally-celebrated franchise to the most rigorous auteur cinema, traces a singular path through contemporary American film. We are thrilled to present a Deauville Talent Award to Kristen Stewart.

Making an impression at age 11 as Jodie Foster’s daughter in David Fincher’s Panic Room (2002), then in Sean Penn’s Into the Wild (2007), Kristen Stewart became a worldwide star thanks to the Twilight saga. Between shooting franchise installments, she leaned into the next phase of her career, a shift toward independence and risk-taking. French filmmaker Oliver Assayas (Deauville Jury President in 2011) made her a new muse of auteur cinema with Sils Maria (2014), earning her the only César Award given to an American actress to this day, for Best Supporting Actress in 2015. The director then cast her in the title role in supernatural thriller Personal Shopper (2016).

Symbol of a young generation carving out an identity beyond received ideas, her choices as an actress reflect a desire to question society, in particular how women are represented. This year, we’ll see her in Charlie’s Angels, a new adaptation of the cult 1980s series, this time directed by a woman, Elizabeth Banks. She’ll also carry two films inspired by true events: Justin Kelly’s JT Leroy, as the transgender alias of a female writer played by Laura Dern, and Benedict Andrews’ Seberg, about a rough episode in the life of actress Jean Seberg, who confronted FBI intimidation for her support of the Black Panther Party.

Having supported her career by presenting such films as Udayan Prasad’s The Yellow Handkerchief (2008), Floria Sigismondi’s The Runaways (2010), Jake Scott’s Welcome to the Rileys (2010), Peter Sattler’s Camp X-Ray (2014) and Kelly Reichard’s Certain Women (2016), the Deauville Festival is delighted to welcome one of the most brilliant actresses of her generation. More than ever at the intersection of all types of American film, Kristen Stewart couldn’t lend a more dazzling face to our 2019 Deauville Talent Award.

More from the Deauville Film Festival:

Kristen Stewart is one of the most accomplished, talented and in-demand young actresses in Hollywood.  In 2015, she became the first American actress to be awarded a Cesar Award in the Best Supporting Actress category for her role in Olivier Assayas' Clouds of Sils Maria, in which she starred alongside Juliette Binoche. She received several other accolades for her performance in this film including the Best Supporting Actress prize awarded by the National Society of Film Critics, the New York Film Critics Circle et the Boston Society of Film Critics. In 2017, Stewart made her directorial debut with the short film Come Swim which premiered at the Sundance Film Festival that year.

Stewart was introduced to worldwide audiences in 2002 with her gripping performance alongside Jodie Foster in David Fincher's Panic Room. Her star took a huge rise when she starred as Bella Swan in the hit franchise The Twilight Saga, opposite Robert Pattinson. The series has grossed over $3.3 billion in worldwide receipts and consists of five motion pictures. She also starred in Universal's box office winner Snow White and The Huntsman directed by Rupert Sanders (2012); and in Walter Salles' screen adaptation of Jack Kerouac's On the Road, which premiered at the 2012 Festival de Cannes.

Stewart will soon star in Justin Kelly's JT LeRoy, Sony's Charlie's Angels, directed by Elizabeth Banks, and as Jean Seberg in Amazon Studios film Seberg, directed by Benedict Andrews. She will also star in Twentieth Century Fox's Underwater, directed by William Eubank, which is slated for a January 2020 release.

The Deauville Film Festival will also screen several of Kristen's films. Click on each film for times and details.

Source 1 2
Posted by Mods TeamKristenSite at 4:10 AM